Contributor David Pogue of The New York Times launches a special four-part series on PBS' "Nova" this Wednesday night called "Making Stuff." And as we see in this sample from David's first episode, some of that stuff is VERY STRONG STUFF - and comes from a very unlikely source:

Most people on Navy aircraft carriers are there to practice military maneuvers to protect the country. But I've come to the USS John C. Stennis for a completely different purpose.

I'm on a quest to find the world's strongest material. To see what materials are used in this ship, I've brought along a sophisticated metallurgical instrument: A refrigerator magnet.

Of all the steel on an aircraft carrier, the steel the pilots probably care most about is the "arresting cable." When the plane comes in at nearly full power, the tail hook (with luck) will catch onto one of those cables and bring the plane to a quick but gradual stop.

A weakened cable could be fatal. So the Navy takes no chances: After every 120 landings, it throws away that expensive cable.

I thought, surely modern science can offer a material that's stronger than the steel in those cables - like, maybe, Kevlar, the stuff in bullet-proof vests.

Kevlar is not metal. It's flexible and it's stronger than steel, according to Tucker Norton, a ballistics expert at duPont. He demonstrated Kevlar's strength with the DuPont Bullet Shooter 3000. "Today we're gonna use this .44 Magnum bullet here against Kevlar XP, we'll see who wins," he said.

The Kevlar did not stop the bullet. "Well, not the first layer," said Norton. "But what's important is all the layers." Indeed, the bullet was still within the vest.

Norton told me that a Kevlar rope actually could replace those steel cables on the ship - at a very high cost. But he also mentioned a material that's stronger yet.

"If you look in a spider web, if you just took one single strand of that spider silk, that strand is stronger than steel as well - a lot like Kevlar," said Norton. "The problem is, we haven't figured out how to make that commercially at a large scale."

He's not kidding. Actually, it's pretty darned hard to make spider thread at a small scale.

"It's sort of the holy grail in terms of fabric, in terms of the richness and the softness," said Nicholas Godley, who should know. He spent four years in Madagascar making a stunning, one-of-a-kind,11-foot cloth out of spider silk.

And his "team" did it by hand - harnessed on their back, with their abdomens that protrude.

It takes 96 strands to make one thin thread - and a lot of threads to make even a tiny sample.

It feels really, really soft. Yet Godley challenged me to break off a piece.

It's like pulling a strand of steel - I'm going to break before it does.

It's not the same silk as you find in a tie - it's much stronger and much more elastic than the standard silk you get from a silkworm.

But there's got to be a faster way to get it.

Which brings us to the weirdest part of this story …

Professor Randy Lewis of the University of Wyoming is a man with a very unusual project. He has been splicing spider genes into goats.

"We take the spider silk gene, we put it in and we attach that piece of DNA that regulates when and where it makes a spider silk protein," Lewis said. 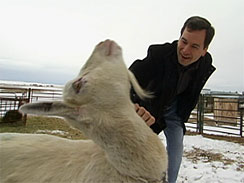 Clearly, it's not spider silk yet. First, Lewis' team removes the fat from the milk, and runs it through an alcohol bath.

And then they're left with - what? Goat-generated, man-made spider silk.

Now, it doesn't look to me like something that could stop an aircraft on an aircraft carrier.

"Right, because it's so fine," Lewis said. "So the idea would be that you would braid this together to make something that's an inch or inch and a half or 2 inches in diameter."

The next step is to see just how strong this silk is. Using a machine that measures how much pulling the thread can take before it snaps, Lewis says his strand of man-made spider silk is stronger than Kevlar, stronger than steel, stronger than carbon fibers. "But we're not stronger than the natural silk," he added.

And so, how does a spider's real silk look on this same test?

"Probably be about 10 times higher," Lewis said. "They figured it out first, so, you know, we're still learning from the spiders."

They own the patent!

Someday soon, goat silk could be used for bulletproof vests with half the weight of Kevlar, and parachute cables, and arresting cables, and artificial ligaments, tendons, and bones for wounded soldiers. No wonder the military is funding his work.

Lewis was asked, aren't there people he meets at cocktail parties who say he's doing the work of the devil - messing with genes?

"If you were to ask one of the soldiers who comes back from Iraq, they would very much like to have a way to come back with a complete jaw," Lewis replied.

Goat-generated spider silk isn't quite ready for mass production. But Randy Lewis and his goats won't quit until they get there.

"Hopefully, we come to the one that says we're stronger than any material that man's ever made," lewis said, "and then we'll go out and have a heck of a party."