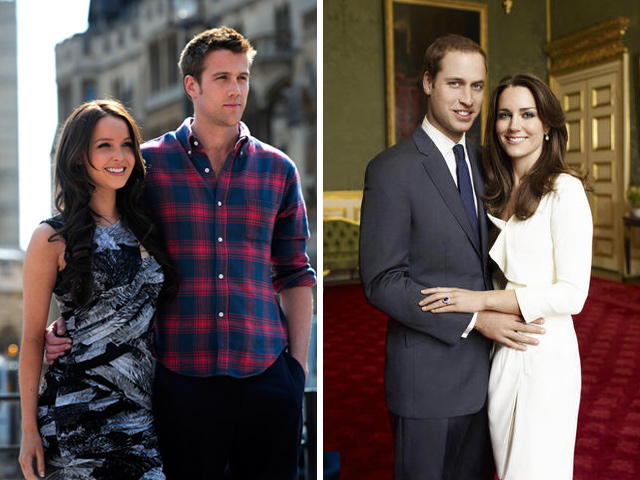 (CBS) As the world waits to witness the fanfare and pomp and circumstance of the royal wedding tomorrow, some may daydream as to what it might be like to be Will and Kate, but for British actress Camilla Luddington and New Zealand actor Nico Evers-Swindell, it came true - at least on Lifetime Television.

For some taking on the task of playing Prince William and Kate Middleton is downright daunting with so many critical eyes watching and reporting on the royal romance. But for not for these young chaps, they took it all in stride!

Video: What it's like to play "William and Kate"
Complete coverage: The royal wedding
Daily CBS News royal wedding blog

So how did the actors get into character?

"Really just diving into his world and taking on some of the dilemmas he faces in life, his need and want to be seen as a normal person, a regular guy coming from extraordinary circumstances. How their worlds collide that coupled with the media frenzy. Just a lot that of that conflict that he faces and needs to maintain on the inside in order to keep maturing and growing on the outside. All those things were attractive to me, so I kind of just invested in that," Evers-Swindell tells CBSNews.com

Luddington, who resembles the princess-to-be, was born in the same county of Berkshire, England, as Middleton.

"I think it helped that I am from the same area as her... I think just knowing her playing grounds when she was younger, which are the same as mine...I sort of know what life is like in England. We've had some very similar experiences, so I felt like I could relate to her a lot," she says.

The film tells the story of how William and Kate met at Scotland's prestigious University of St. Andrews and how their friendship blossomed into a romance. Although their nine-year courtship didn't come without its challenges - due to the interference of social and royal family pressures and intense media scrutiny, the love between the prince and commoner prevailed.

While the film has been criticized by Brits on its accuracy, its L.A. location, as well as the actors' accents, royal well-wishers should be the judge of it themselves and continue to be swept up in the romance of it all.

William and Kate TV movie: So bad it's good

The royal wedding may be taking place from across the pond, but America hasn't missed a beat reporting the events leading up to this colossal event.

"I think they're going to be a refreshing addition to the royal family. I am excited to see what Kate does in the future and how their relationship goes. I think it's going to be great," Luddington adds.

So where will Nico and Camilla be on April 29?

They won't be posing for pictures at Buckingham Palace, but they will be tuning in from afar, watching it on TV with the rest of the world. Luddington and her family will be having a party in England to ring in the royal wedding. Who knows, maybe Kate's native county of Berkshire will be celebrating in the streets with a royal block party!

If you haven't had enough of the royal wedding, you can still check out Lifetime's "William and Kate," which will air on the same day as the royal wedding on Friday, April 29 at 12 p.m. and 8 p.m.

Luddington and Evers-Swindell share their experiences portraying the royal couple. Do you think they look like William and Kate?