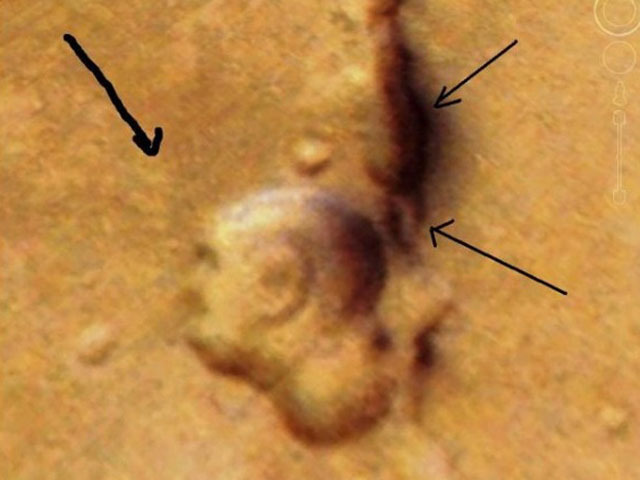 Now that Google Mars, a new online map pieced together from satellite images of the Red Planet, is up and running, space enthusiasts the world over are finding interesting objects on the Martian surface.

The latest is a face found by an Italian named Matteo Ianneo, who has also claimed to have found vegetation, entrances to underground tunnels, and city ruins on Mars in the past few weeks. Ianneo says his latest surface find, which is located at 33°12'29.82"N, 12°55'51.21"W, looks like a picture of Mahatma Gandhi in profile.

It is reminiscent of the Face on Mars, a hill photographed by NASA's Viking 1 probe in 1976 that, in one low-resolution image, resembled a face.  Within days of its discovery, space hobbyists were speculating that the structure was man-made and had been built by ancient Martians. A higher-resolution image taken of the "face" last year by NASA's HiRISE camera revealed a rugged hill. [Read: Seeing Things On Mars: A History of Martian Illusions]

A similar low-res deception is at work this time around.

To help sort out just what Ianneo is looking at, Jonathan Hill, a researcher at the Arizona State University Mars Space Flight Facility, which owns and operates a database of Mars images somewhat similar to Google's, tracked down the photo Google used of the Gandhi face, as seen below. It is a low-resolution image taken by the European Space Agency's Mars Express Orbiter.

A higher-resolution image of the same geologic feature taken by a better camera, the CTX camera aboard the Mars Reconnaisance Orbiter, erases the illusion. "As you can see, we're actually looking at some sort of collapse pit, not a mound like it appears in the Google Mars image," Hill told Life's Little Mysteries.

"Pareidolia" is the scientific term for seeing faces (or other significant objects) where they aren't. Face pareidolia happens, scientists say, as a byproduct of our heightened sensitivity to the details of human faces. Takeo Watanabe of the Boston University Visual Sciences Laboratory put it this way: "We've over-learned human faces so we see them where they aren't."

Last week, a self-described "armchair astronaut" discovered another anomaly while perusing the Google Mars map.  In a viral Youtube video, David Martines claimed to have identified a human (or alien) base on the planet, which he dubbed Bio Station Alpha. The somewhat mysterious linear streak that he thought was a building on the Martian surface was later revealed to be a cosmic ray artifact — a distortion arising in the camera that snapped the photo of the surface when an energetic particle zipped through it.

People have been finding suggestive objects on the surface of Mars for centuries. By making our neighboring planet visible to everyone, Google Mars will likely increase the frequency of such finds.