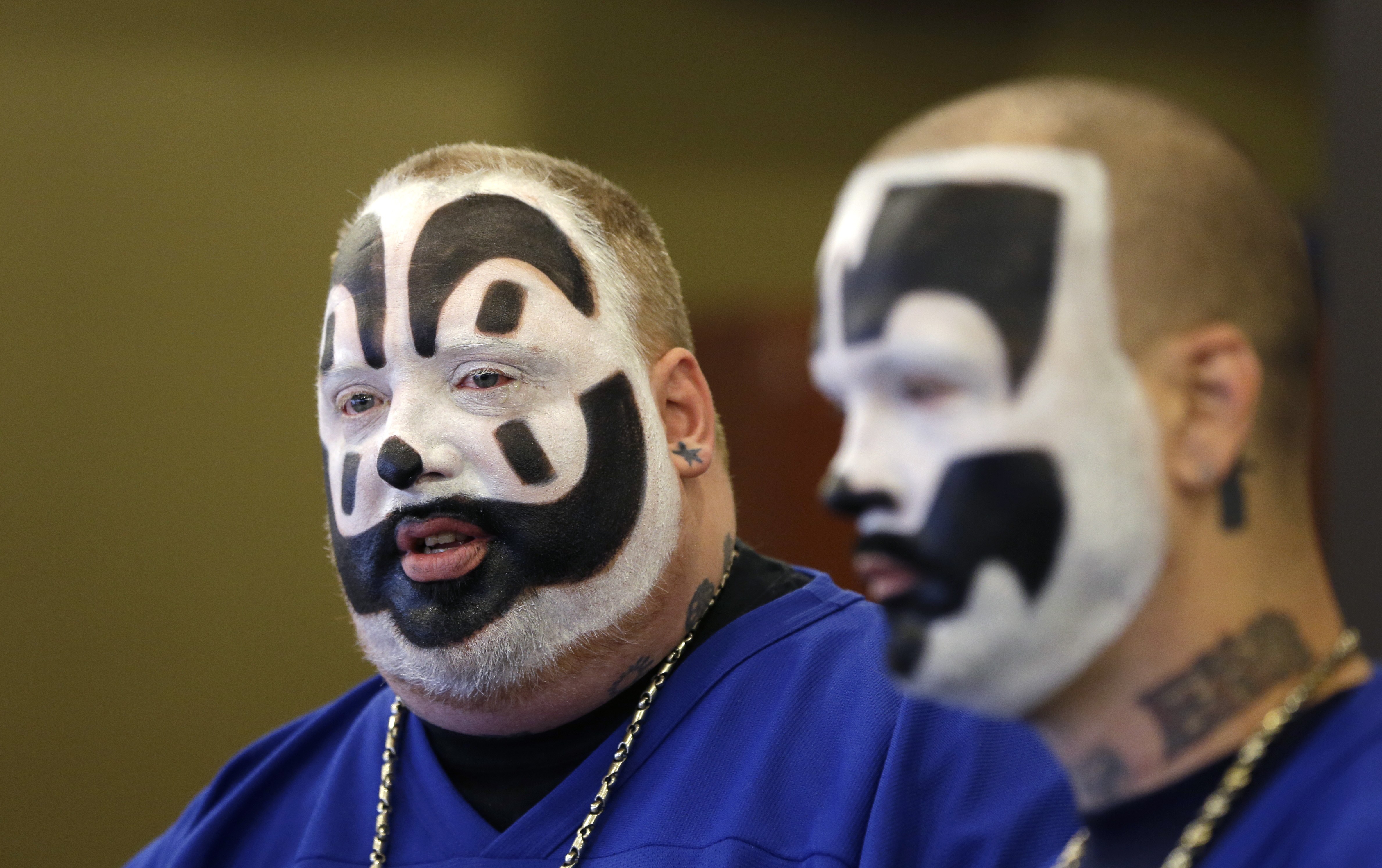 So, what's a Juggalo?

Broadly speaking, a Juggalo is a fan of the Insane Clown Posse, a hardcore rap-rock duo from Michigan, and their affiliated acts under the Psychopathic Records label.

And they're holding some kind of rally in Washington, DC, this weekend?

They sure are! The issue at hand is the FBI's designation of Juggalos as a "loosely-organized hybrid gang," a conclusion the Bureau reached in 2011. Juggalo organizers are expecting 3,000 people to attend the rally on Saturday, which will be followed by an Insane Clown Posse show in Bristow, Virginia, about an hour's drive away.

Also happening in Washington that day: the "Mother of All Rallies," a pro-Trump protest organized by right-wing groups. We don't know which will have more participants.

Are they a gang?

Unsurprisingly, the Insane Clown Posse (or ICP) and its fans say no. Perhaps more surprisingly, the ACLU agrees. Their lawsuit attempting to overturn the designation has already been dismissed twice, although an ACLU appeal is currently under consideration.

OK, but are they a gang?

The FBI says yes, kind of. "Most crimes committed by Juggalos are sporadic, disorganized, individualistic, and often involve simple assault, personal drug use and possession, petty theft, and vandalism," the Bureau said in their 2011 National Gang Threat Assessment.

"However, open source reporting suggests that a small number of Juggalos are forming more organized subsets and engaging in more gang-like criminal activity, such as felony assaults, thefts, robberies, and drug sales."

ICP and the ACLU counter that this designation is both ridiculous and deeply harmful to a much-maligned subculture. "We're asking for the court to rule that the gang designation is unconstitutional, and to order the [Department of Justice] to clarify that Juggalos are not a gang, both publicly and to local law enforcement agencies," the ACLU's Desire Vincent told the Guardian this week.

Why are they "much-maligned"?

There's no one answer to this question, but let's start with the music. ICP is one of the best-selling artists in America, but professional music critics generally dismiss them and they never broke into the mainstream. Still, by 2012, the duo had three albums in Billboard's top 10 and had sold over 11 million copies of the 24 albums they had produced by then, according to Mlive.com. Their music also tends to have a dark and violent edge, which is wrapped up in a homegrown mythology known as the "Dark Carnival."

You heard me. But before we get into that, a little history. ICP is made up of Joseph Ulster and Joseph Bruce, aka Violent J and Shaggy 2 Dope. "They're really kind of these white, high school dropouts from Detroit who discovered 'horrorcore' music, which is gory, violent, kind of over-the-top – sort of like horror movies, but in audio form," the pop culture writer Nathan Rabin told Reason earlier this month.

ICP started off as a mainstream gangsta rap group known as the Inner City Posse, which was named after a gang they started in the down-and-out Motor City of the late 1980s. A stint in prison for Bruce caused them to abandon criminality and concentrate on music, with the Inner City Posse trying to make a name for itself on the local scene.

One day in the early 1990s, Bruce says he had a nightmare in which he saw a kind of hell populated by demonic clowns. He called it the Dark Carnival, and it quickly came to define ICP's aesthetic.

"The band started painting their faces like the terrifying clowns of the nightmare. They stopped making albums and started making 'Joker Cards,' theological diatribes describing a limbo-like 'Dark Carnival' that consumes the wicked," wrote the Washington Free Beacon's Bill McMorris after visiting the annual "Gathering of the Juggalos" in 2013. "Those who neglect the poor and engage in bigotry, sexism, pedophilia, and murder are doomed; those who lead good lives are redeemed."

That brings us back to the music, which for all its profanity and creepy mythology actually sometimes has an uplifting, inclusive, anti-racist and occasionally God-centric message. Take the lyrics from their 2009 hit "Miracles," a song celebrating the awesome mysteries of Creation:

Music is a lot like love, it's all a feeling

And it fills the room from the floor to the ceiling

I see miracles all around me

Stop and look around, it's all astounding

It's really a nice song.

So it's really just some band with a hardcore following like The Grateful Dead?

Well, yes and no. "Yes" in the sense that its fans often see the band and the community around it ("the Family" in ICP lingo) as central to their identity. "No" in the sense that Juggalos have a penchant for painting their faces like nightmarish clowns, which Violent J and Shaggy 2 Dope do on stage and in interviews.

It's also impossible to talk about why Juggalos get such a bad wrap without discussing class. Juggalos "are very easy to make fun of -- they're the poor white people that everybody has no problem mocking," says Rabin. They are a punchline in pop culture and seen as embodying the various pathologies associated with low-income whites from Middle America.

ICP certainly leans in to the duo's working class roots. The cheap off-brand Midwestern soda Faygo serves as a cultural signifier in this regard, with ICP showering it on their fans from the stage during concerts. And many of their lyrics focus on the hard times of America's underclass, which remains their central demographic. As Violent J once said in an interview, they wear clown makeup to mock those who see "poor people as carnival freaks."

Then there's the "Gathering of the Juggalos" featuring ICP and associated acts, which is debauched even by the low standards of music festivals. Until 2014, it was held at Cave-in-Rock, Illinois, at the 600-acre property of Tim "Hog Daddy" York. "The Gathering" soon became infamous for drug use, public group sex, prostitution, and all the other hallmarks of a civilization in rapid decline. The yearly event depleted the local police budget until it moved on to other venues. "I was military police in Iraq; that was easier," a sheriff's deputy told McMorris in 2013 about policing the Gathering.

That may be more than I need to know?

Sure, but you're the one who clicked, so on we go.

Yes. The fact is, a gang designation by the FBI is serious business, regardless of what you think of ICP's music of the Juggalo lifestyle. Got an ICP decal on the back of your car? Well, thanks to the feds, you can be pulled over for that. In online forums, Juggalos describe how they've been targeted since the feds came after them. At least one Juggalo woman (sometimes known as a "Juggalette") says she was fired from her job in Virginia's prison system because of the designation. Others say they lost custody of their children.

So as ridiculous as a "Juggalo March on Washington" sounds, there's a logic to it. The federal government may well be overstepping its bounds in classifying the Juggalos as a gang, which is the reason why groups like the ACLU are getting involved. To hear them tell it, there are serious issues of free expression at play here.

"If Juggalos is being f***** with, we gotta to do so something about it, you know what I'm saying?" Shaggy 2 Dope told Reason. "If that ties us into some kind of 1st Amendment movement, whatever, we're 1st Amendment warriors, I dunno."