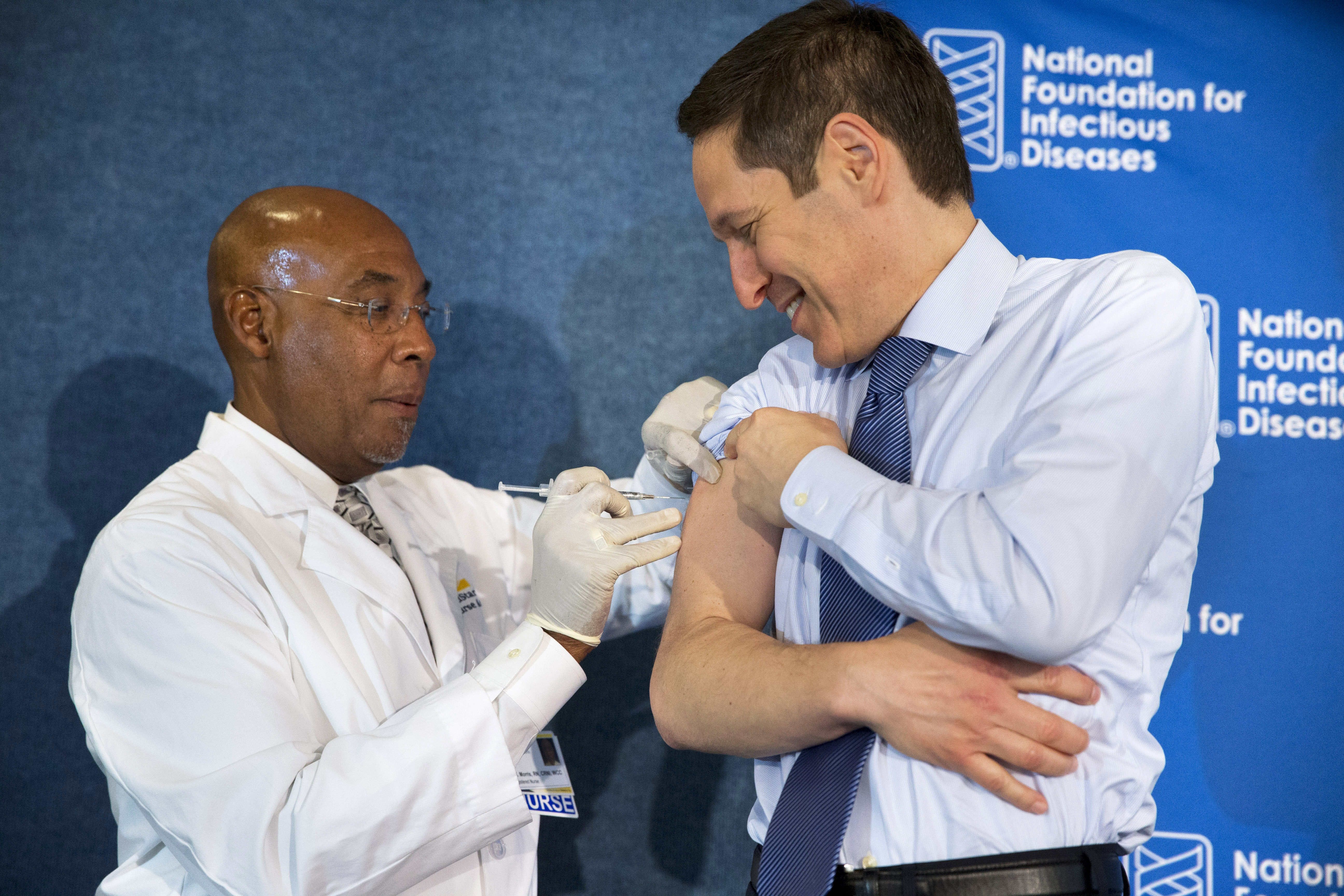 Give the flu vaccine another chance, health officials say. This year's version has gotten a recipe change that should make it more effective, after last winter's nasty surprise strain of the virus that sickened millions of people.

More than 170 million doses of flu vaccine are expected to be available this year, with options ranging from traditional shots, a nasal spray, a high-dose version for seniors and even a needle-free injection for the squeamish.

"It doesn't matter which flu vaccine you get, just get one," Dr. Tom Frieden, director of the Centers for Disease Control and Prevention, said Thursday before rolling up his own sleeve for a regular shot.

Last fall and winter marked "a bad year for flu," Frieden acknowledged, as a mutated strain of Type A flu began spreading widely after the vaccine doses already were brewed.

"Basically that strain drifted or mutated in some way after the flu vaccine was already made," Dr. Holly Phillips told "CBS This Morning" earlier this year.

"It wipes you out. You become a worn out dish rag," she said laughing.

Stamas went to a clinic in Arlington, Massachusetts for people 65 and older. Those vaccinated there receive a special high dose vaccine four times stronger than the regular one. This could help older people mount a better immune response.

"I think everybody should get it, I really do," Stamas said.

Typically, flu vaccine is 50 percent to 60 percent effective, meaning it can cut a person's risk of catching the flu by about half. But last year's version vaccine was only 13 percent effective against the mutated version of the H3N2 flu strain that caused most of last year's illnesses, Frieden said. Flu-related hospitalizations of seniors last year were the highest recorded in the decade that CDC has counted.

That same H3N2 strain still is circulating in other countries and even in low levels in the U.S., Frieden said. It is covered by this year's vaccine.

"So far, the strains in this year's vaccine seem likely to match," Frieden said in an interview Thursday, stressing that CDC is closely monitoring genetic fluctuations to see if that changes.

The vaccine protects against three or four different strains, depending on the brand, Schaffner noted, saying that even if one strain mutates, vaccination remains "the best defense against flu."

Some things to know about flu vaccinations:

WHO SHOULD BE VACCINATED

Everybody starting at 6 months of age, the CDC says.

Flu is especially dangerous for people over age 65, young children, pregnant women and people with chronic health conditions such as asthma or heart disease. But healthy young people can get seriously ill, too, as well as spread the disease.

CDC said last year, at least 145 children died of flu, above the yearly average of 100, a number Frieden called an underestimate. Only about half of children who die from flu have underlying health problems, noted Dr. Wendy Sue Swanson of Seattle Children's Hospital.

Only about half of Americans get an annual flu immunization. CDC says on average, flu kills about 24,000 people a year in the U.S.

New CDC data shows vaccination rates last year were highest for children ages 6 months to 23 months - at 75 percent, the only age group to meet public health goals. Children ages 2 to 4 weren't far behind, at 68 percent, and 62 percent of 5- to 12-year-olds were vaccinated.

About two-thirds of seniors were vaccinated. But only about a third of adults ages 18 to 49 were, making them the least protected group.

About half of pregnant women get immunized, important not only for mom's health but because the vaccine also protects her baby during its first six months of life, Swanson noted.

WHEN TO GET VACCINATED

About 40 million of this year's doses already have been shipped to doctors, drugstores and other locations, and vaccinations are under way. It takes about two weeks for protection to kick in, and while flu typically peaks between December and February, there's no way to predict when outbreaks will begin.

Most are covered by private and government health insurance, often without a co-pay. For those paying out of pocket, prices can range between $32 and $40.

WHICH KIND TO CHOOSE

One option this year is a needle-free device called a jet injector that forces the vaccine into a stream of fluid that penetrates the skin. It is recommended for adults 18 to 64. The CDC said it can result in some of the same soreness as a traditional shot.

The nasal spray is the most widely known alternative to the traditional shot, and can be used by healthy people ages 2 to 49.

Other choices are targeted to different age groups and health conditions and include the "intradermal" or skin-deep shots that use tiny needles; a version for people allergic to the chicken eggs used in brewing most flu vaccine; and a high-dose version for people 65 and older, whose immune systems typically don't respond as robustly to flu vaccine as younger people's.

TOWARD A BETTER VACCINE

The vaccine is changed yearly to keep up as influenza viruses mutate, and production takes months. It protects against two Type A strains -- H3N2 and the H1N1 subtype, such as the swine flu so common a few years ago -- plus either one or two milder Type B strains, depending on the brand.

CDC is working with manufacturers to cut vaccine production time, giving more time to spot it if a mutation is forming, Frieden said.

The bigger goal is to create a "universal vaccine" that could work on many flu strains. "This would be a one shot once in your lifetime and it would protect you against many strains of the flu," Phillips said.

Last month, researchers reported a small step toward that goal by targeting vaccines to a slightly different spot on the flu virus. But Frieden cautions that more broadly effective flu vaccines are "a few years away at best."