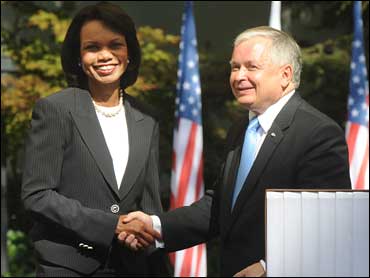 This last month of summer the temperatures and humidity have been cooler than normal but the foreign policy and national security problems have been hot, hot, hot. No one is calling this August the summer doldrums.

Russia's invasion of Georgia has been attention-grabber No. 1. Secretary of State Condoleezza Rice's vacation was first interrupted, and then shortened as she was forced to come back to Washington to deal with the crisis before heading toTbilisi in order to try to bring a halt to the fighting. President George W. Bush even delayed the start of his annual August vacation in Crawford, Texas, because of the situation in the former satellite state of the Soviet Union, which is now Washington's close ally.

Pakistan's new political leadership decided this month was the time to force Pervez Musharraf from power and with that move Washington's closest ally in the global war on terror was pushed to the sidelines. While it's good news that Pakistan's democratic processes are working there is much uncertainty in Washington about how stalwart the new leadership in Islamabad will be when it comes to cooperating with Washington in the war against Al-Qaeda and the Taliban.

Meanwhile, negotiations between the Bush administration and Prime Minister Maliki's government in Baghdad seem to be coming close to a deal on just how long American troops will be in Iraq and whose legal jurisdiction they'll be under when they are based there. Rice made an unannounced visit to Baghdad this week for talks which narrowed the differences but she did not come away with a final deal.

Mr. Bush got a preview of this "vacation interruptus" early in August when he saw Russia's Prime Minister Vladimir Putin in Beijing as both attended the opening ceremonies of the Olympic Games. Whatever Mr. Bush said to Putin about not sending Russian troops across the border with Georgia it obviously had little or no impact on Moscow's desire to punish Georgia and perhaps try to reclaim the separatist provinces of South Ossetia and Abkhazia from Georgian control.

Amidst all this one distinctly positive development: the U.S. and Libya concluded an arrangement which should settle the last big hurdle standing between Washington and Tripoli before full diplomatic relations resume. While there has been much progress between the two in the last few years the agreement to set up a fund to make final payments to victims and families of Libyan-sponsored terror attacks -- especially Pan Am 103 and the La Belle discothèque bombings -- is a long-awaited diplomatic achievement.

Clearly the most important development this month was Russia's invasion of Georgia. The fallout from Moscow's action has already started but is by no means finished. The U.S. and other NATO allies have cancelled some military maneuvers with Russian forces but that is only a minor casualty compared to the future relationship between Russia and the United States and between Russia and its European neighbors.

To punish Moscow for its aggressive behavior, there is talk about keeping Russia out of the World Trade Organization and kicking it out of the G-8. However, since Russia controls the spigot to much of Europe's energy needs to stay warm this winter it is an open question just how much the Europeans will want to join the Bush administration in exacting a heavy price for Moscow's actions. No matter what consequences are ultimately agreed upon, August 2008 will be remembered as the time Russia re-connected with the more aggressive tendencies of its past.

Already the Russian actions in Georgia have spurred the Poles to move forward with a deal to have American missile defense systems based on Polish territory. In what seems a still increasing series of rising tensions that move has further angered the Russians.

As analysts and policy makers look at how this Augusts' actions came to pass and see what signals might have been missed, they are also sorting out next steps and future policy moves. Thus, the summer ends with tensions and suspicions greatly increased between Washington and Moscow and it hands the Bush administration a new and serious trouble spot to worry about during its last five months in office. Not exactly the way to end a summer vacation but further proof, as the saying goes, that "stuff happens."