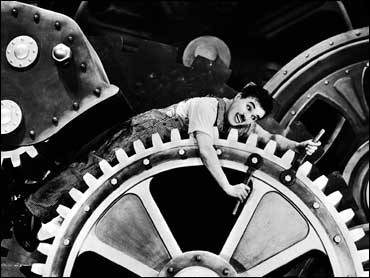 Back during the Great Depression, when the going got tough, we headed to the movies for escape, for refuge, and maybe even a laugh or two. So does history repeat itself? Our Sunday Morning Cover Story is reported by Jerry Bowen:

In New York City this month, movie fans have been taking a trip back in time, lining up to see the same movies Americans escaped to during the last financial meltdown, the Great Depression:

"According to these movies, there was a lot of pulling together," said patron Perry Grumman. "People wanted to team up because there was too many people out of work, too many people who were suffering, and they kind of looked out for each other."

Tickets were sold at the Depression-era price of 35 cents.

A big band was on hand to play Depression-era tunes, and they even handed out bread on the lines, to get the audience in the mood.

Before the feature presentation, the big screen lit up with old newsreel reports: 1930s-era bankers defending themselves in congressional hearings back then, eerily similar to today's bankers and Wall Street giants trying to explain themselves in Washington.

"I think certain things happen when we are in manifestly dark times," said New York Times columnist and Oscar season blogger David Carr. "And I think when darkness is intruding from every direction, people like to go in a room and hold hands and stare at a little campfire in common. It's a way, number one, to forget about what's out there, and it's also a way to experience community."

It's an appetite for uplift, says Carr, that's reflected in the films up for Best Picture this year. He notes that missing from this year's nominees was the wildly popular but dark and brooding "Batman" picture.

"They didn't pick 'Dark Knight'; they chose 'Benjamin Button,' which is about 'it doesn't matter what direction you're life is in, as long as you live it well,'" Carr said. "They picked 'Slumdog,' which I think is a particularly uplifting and wonderful movie. They picked 'Frost/Nixon,' in which journalism triumphs."

Film historian and author Neal Gabler points to another of 2008's acclaimed films that he said explicitly deals with the notion of hope: Clint Eastwood's "Changeling."

"I mean, the whole film is about that fact, that though you're pretty darn sure that it's not gonna turn out the way you want it to turn out, you are still energized and motivated by the notion that this is some slim possibility, slim, that things will turn out right."

Hope even in bad times: An idea, says Gabler, that drove many of the films made during the Depression.

"We tend to think of movies during the Depression as being escapist," he said. "We love the screwball comedies."

But that, he says, isn't the whole picture.

"There are as many movies during the Depression that deal with serious issues as there are films that allow us to escape and not have to confront the Depression at all."

And even those screwball comedies, such as "My Man Godfrey," he says, came with a message:

"'My Man Godfrey,' in which some ditzy rich people pick up allegedly just a bum, turns out there's a switcheroo at the end in which you know the lower classes teach the upper classes something.

"That becomes a kind of staple in all of those movies. They don't just take you outside the Depression; they give you a take on the Depression."

The "Thin Man" movies, with William Powell and Myrna Loy … Clark Gable and Claudette Colbert in Frank Capra's "It Happened One Night" … and Mae West as, well, Mae West.

"They were a wonderful escape," said veteran actor and director Norman Lloyd. "People would go into the theater, in this darkened cavern, and it took them out of themselves. They could fantasize about what happened on the screen, about those beautiful stars that existed then."

Lloyd, now 94, was starring on the New York stage when the Depression gripped America.

In addition to the glamour, Lloyd says, many films, including one by his friend Charlie Chaplin, reflected the agony of those times:

The film that comes to me immediately is Charlie Chaplin's "Modern Times." I mean, the idea of a little guy becoming part of the machine and so on."

The little guy being ground up by the machine was one of those shared feelings back then.

Tonight, the Oscars themselves will also try for uplift, with songs and dances to entertain, and, of course, the red carpet and the designer fashions … a little bit of escape in grim times.

But underneath the glitz, there are some tough questions about the future, and how the movie industry will respond to the economic meltdown that wasn't even in the picture when this year's Oscar-nominated movies were made.

David Carr believes the wheels are already turning in Hollywood:

(CBS)
"Here's the thing: There's all sorts of movies in the pipeline and that are already moving and what gets green-lit will depend on the mood of the country," Carr (left) told Bowen. "Oliver Stone nailed it with 'Greed is good' and Gordon Gecco in 'Wall Street,' and I'm sure that this particular financial debacle will have its Oliver Stone. There's no doubt, he or she is probably out there, making the movie right now. Might even be Oliver Stone! Who knows?"

Film historian Neal Gabler says if the 1930s are any guide, Hollywood will deliver an edgy mix of drama and comedies:

"Well, of course we're not gonna know what kinds of films come out of this economic catastrophe for at least another year, because we really didn't sink into this catastrophe until last September and filmmakers haven't had time really to digest it and to react to it and make movies about it."

But Gabler worries that movies as a communal campfire may be a thing of the past. At a time when entertainment options are so diverse, from video games to the Internet to the Cineplex, does Hollywood still have the power to influence the mood of a nation?

"You know, during the Great Depression, the fissures weren't so great, so that there could be a sense of communal spirit, communal anxiety even, and I don't know that we even have an entertainment culture anymore that is capable of creating that kind of unity. We have movies now that, you know, are designed essentially to attract an older audience for certain films, a teenage [audience for certain] films, a women's audience for these films, a male audience for these films. But we seldom have the kinds of movies that were made during the Great Depression, which we'll call the art of the middle. Now we've got an art of, you know, many different slices."

Norman Lloyd has his doubts, too:

Back in New York, the old Depression-era films are providing entertainment … and perhaps some inspiration:

"I think there are things that maybe people learn that, you know, this is what we're confronted with now. It isn't new; it has happened in the past," Film Forum patron Alex Wong said. "How did people cope with it then? And how do we cope with it now?"