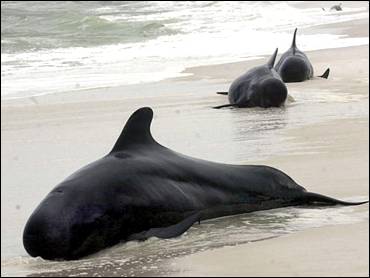 A toxic chemical used to prevent barnacles from clinging to ship hulls may cause deafness in marine mammals and could lead whales to beach themselves, Yale researchers say.

The hearing loss would be the latest environmental hazard linked to TBT, a chemical already known to cause death or genetic mutation in small aquatic life such as sea snails and clams. TBT, short for tributylin, is banned in many countries but is still widely used.

The Yale study, which will be published in the Biophysical Journal in March, found that TBT interfered with the ability of the inner ear's outer hair cells to regulate chloride levels. Those hair cells help amplify sounds and are critical in the normal hearing process. When the chloride is not regulated, it can affect hearing, researchers said.

"Since many marine mammals use echolocation or sonar to get around, it's possible this could be contributing to whales and dolphins beaching and hitting ships," said Joseph Santos-Sacchi, professor of surgery and neurobiology at Yale School of Medicine.

Yale researchers studied guinea pigs, not whales, but Santos-Sacchi said the results suggest TBT could have a similar effect on whales because mammals have similar ear structures.

"I think it's a reasonable hypothesis that this could possibly be happening," said Theo Colborn, a senior fellow at the World Wildlife Fund and a University of Florida zoology professor who has studied TBT but was not involved in the Yale study. "It sounds very logical. Unfortunately I don't know how they're going to get a hold of whale ear cells."

Santos-Sacchi said beached whale carcasses could be studied to see if researchers detect heightened levels of TBT or evidence of changes to the ear structure.

Darlene Ketten, a senior biologist at Woods Hole Oceanographic Institution in Massachusetts, has studied the ears of beached whales. She had not read the Yale study Thursday and said that while its findings sounded plausible, researchers have not seen a pattern of damage to the outer hair cells of beached whales.