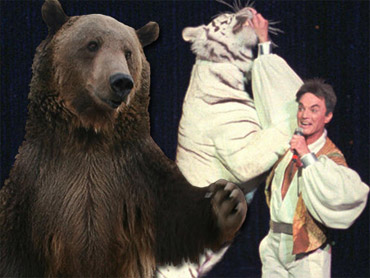 Rocky, a 700-pound grizzly considered one of the most gentle animals of all Hollywood's performing beasts, bites down on the neck of a veteran trainer. Illusionist Roy Horn is severely mauled by a show tiger during a Las Vegas performance. An elephant at an Indonesian tourist resort tramples its longtime handler to death.

And now the latest - a 40-year-old trainer at SeaWorld Orlando is drowned by a killer whale named Tilikum, an incident that raises anew the question of whether some beasts, especially the biggest ones, have any business being tamed to entertain.

Descriptions of Tilikum, the 22-foot orca which has now killed two trainers, inevitably come around to his intimidating size.

At nearly six tons, the bull bought for breeding is a giant among killer whales, the largest in captivity.

"Humans trying to incarcerate orcas or elephants or any type of large brain or large society species, it's proven it doesn't work," said Mark Berman, associate director at the environmental group Earth Island Institute in Berkeley, California. "They're just too big."

No animals were meant to entertain humans, he said.

In fact, an investigation by California's workplace safety office into a 2006 attack by an orca on a trainer at SeaWorld's San Diego park initially reported that it was only a matter of time before a trainer was killed. That trainer escaped with a broken foot.

However, after objections from SeaWorld that the office had no place offering opinions that a trainer's death was inevitable, the workplace safety officials rescinded the report and apologized. They noted its investigation required expertise it didn't have.

Former SeaWorld head trainer Thad Lacinak says captive killer whales serve as ambassadors of the species to educate the public and help protect them in the wild.

"These animals are invaluable in terms of what we can learn from them. And you cannot learn about killer whales through a pair of binoculars," Lacinak said.

Using killer whales to perform, or displaying animals at zoos, brings them to life for the public, he said, something that watching the Discovery Channel just can't do.

"We know for a fact that people do not learn in static conditions. They learn from these animals when they are entertained by them," Lacinak said. "That's just how people learn. They don't learn when they're bored ... They have a greater appreciation of the animals when they walk out." Lacinak also stated the obvious - that trainers know their jobs are inherently dangerous but take the risks because they believe they're outweighed by the rewards.

Orlando SeaWorld trainer Dawn Brancheau was rubbing Tilikum from a poolside platform on Wednesday when the whale reached up, grabbed her ponytail and dragged her underwater. She died from multiple traumatic injuries and drowning.

Killer whales are the largest of the dolphin species. They are extremely intelligent and the most efficient predators in the sea. Some say killer whales are just too smart to be penned in pools that can bore them and possibly lead to trouble.

"Orcas are simply too big, too complex, too intelligent to be adequately accommodated in captivity," said Naomi Rose, a marine mammal scientist with the Humane Society of the United States. "The tanks are always going to be too featureless, too small. ... The number of incidents where trainers have been injured is much greater than most people know. They aren't all reported."

Orcas in the wild can travel up to 100 miles (160 kilometers) in a day and thousands of miles in a lifetime in the ocean, where they are generally harmless to humans, said Howard Garrett, co-founder and director of the Washington-based nonprofit Orca Network.

"In their natural habitat, there is no record of any harm to a human anywhere," Garrett said. "You cannot say that about elephants or wolves or any other highly evolved social mammal, and that really is extraordinary."

Even in captivity, orcas rarely attack out of aggression, Lacinak said, adding that they are usually cases of a killer whale trying to play with a trainer.

"It was not a bloodthirsty attack," Lacinak said of the recent incident at SeaWorld.

He said the whale likely saw the trainer's ponytail as a toy, then dragged the woman into the water and turned it into a game.

Gary Wilson, a professor at Moorpark College in California, the country's only school where students can learn to train marine mammals, believes that interacting with animals in the wild would be better, but that's not possible for most people.

"If it was a perfect world we wouldn't need to have any animals in captivity, but the reality is in order to learn about these animals and to actually ensure their survival in the wild, we need to have them in captivity so we can study them and people can learn to appreciate them," Wilson said. "If SeaWorld didn't have dolphins and whales in captivity, there would be many fewer people in the world that even cared about them at all."