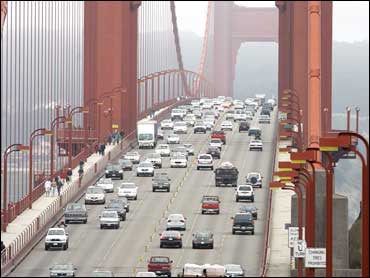 Despite an effort by auto industry lobbyists to kill the move, two Pacific Northwest States — Oregon and Washington — are getting ready to adopt California's new vehicle emission standards to reduce greenhouse gases.

When that happens, California's newly implemented emissions standards — the toughest in the United States — will be in effect along the entire West Coast from Canada to Mexico.

By 2016, all new cars, sports utility vehicles and light trucks sold in the West Coast states would have to comply with the tougher standards on emissions of greenhouse gases such as carbon dioxide, which are believed to be a leading cause of global warming. The 2016 date was set to give automakers plenty of time to comply with the new standards.

At least six states in the Northeast are also moving to adopt California's new tailpipe standards to reduce greenhouse gas emissions from cars.

It's an environmental squeeze play — with states on the two coasts working to try to force the auto industry to turn out cleaner, more fuel efficient cars, since those states comprise nearly a third of the U.S. car market.

"People realize that having more advanced-technology cars on the road will enhance our oil security and begin to address global warming issues," says Rob Sargent of the Boston-based National Association of State Public Interest Research Groups.

Under the federal Clean Air Act, California is allowed to set pollution standards for cars and trucks that are more stringent than federal standards. Other states can choose either California's standards or the looser federal rules.

Most northeastern states have followed California vehicle emission rules for years, and now those states are making the change to reflect California's latest rules regulating carbon dioxide and other greenhouse gas emissions from vehicles.

While the movement has gained little traction in the Midwest and the South to date, it's gotten a huge boost with the three West Coast states unifying around the tough new California standards.

Sargent said other states, such as Pennsylvania, Illinois and North Carolina, also are starting to look at moving to the new California standards.

"Despite what the Bush folks say, more people are realizing that global warming is a problem that we need to begin to address," he said.

Climatologists have warned that if allowed to continue, rising temperatures caused by driving and other human activities will cause melting glaciers, rising sea levels and weather changes.

California lawmakers in 2002 directed the California Air Resources Board to develop rules to reduce vehicle emissions of greenhouse gases, a task the board completed last September. The regulations will be phased in starting in 2009, with all new cars, sports utility vehicles and light trucks required to be in full compliance by 2016.

The auto industry is suing California over its new standards, saying the state lacks authority to implement such regulations and that the rules would eventually add $3,000 (euro2,460) to the cost of a new car.

"Consumers ought to be able to make the choices of options they want on their vehicle, and not have those choices made for them," says Eron Shosteck of the Alliance of Automobile Manufacturers, a Washington, D.C.-based auto industry group.

This year, the auto industry has fought to try to prevent the entire West Coast from becoming what environmentalists call a "clean car corridor."

Oregon Gov. Ted Kulongoski, a Democrat, said Oregon and the other states need to act because the Bush administration has failed to take steps to curtail global warming.

"If the federal government doesn't want to move forward on global warming, then the states are going to have to do it," the governor said in an interview.

Besides the three West Coast states that are moving to adopt the new emission standards, six Northeast states are expected to finalize rules by the end of this year — New York, Connecticut, New Jersey, Massachusetts, Vermont and Maine, according to Northeast States for Coordinated Air Use Management, an association of state air quality officials from the region.