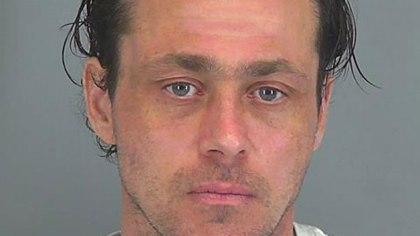 PEABODY, Mass. -- A second suspect in the gruesome killing of two people in Massachusetts has been captured in South Carolina.

Wes Doughty was taken into custody Friday in Spartanburg, prosecutors said. He’ll be arraigned at the Spartanburg County Detention Facility on Monday on a fugitive from justice charge. If he waives rendition, he will be returned to Massachusetts within the week, Essex District Attorney Jonathan Blodgett’s office said.

Doughty was stopped by officers for panhandling at an intersection, the Spartanburg County sheriff’s office said in statement. Only after officers ran his information through a national criminal database did they learn he was wanted in Massachusetts.

Doughty had been sought in connection with last weekend’s slaying of Mark Greenlaw and Jennifer O’Connor, whose bodies were found in a cluttered Peabody home. Police first discovered the gruesome scene Saturday night, when a woman ran from the house and flagged down a car. The scene was so grisly that at first police couldn’t tell how many victims there were.

Sources told CBS Boston the couple were found shot to death in the home’s basement, their bodies wrapped in rugs and plastic. Sources also told the station there were body parts at the murder scene, but investigators would say only they were awaiting autopsy results.

Authorities said the victims were dating and thought to have been living together at the Peabody home where they were found dead, reported CBS Boston.

Police chasing Doughty said he was likely responsible for a carjacking a man at knifepoint in Middleton on Wednesday. The victim escaped in Boston, and police warned that Doughty was considered armed and dangerous. The car was found near where Doughty was picked up for panhandling in Spartanburg.

Sources tell CBS Boston investigators knew he was heading south after the carjacking. The carjacking victim’s cell phone may have played a role in helping track him, the station reports.

Another suspect, Michael Hebb, has pleaded not guilty to murder charges and is being held without bail.