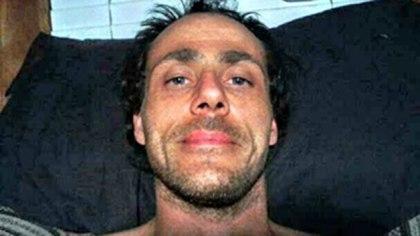 PEABODY, Mass. --  A suspect in a grisly double homicide was held without bail on Tuesday as authorities continued to search for an “armed and dangerous” accomplice.

Not-guilty pleas to two counts of murder were entered on behalf of Michael Hebb at a brief arraignment.

Hebb is charged with killing Mark Greenlaw and Jennifer O’Connor, who were found dead in a Peabody home Saturday. The victims were dating and appeared to be living in the home, prosecutors said.

The scene in the cluttered home was so grisly that at first police could not tell how many victims there were. Autopsies have been scheduled to determine the causes of their deaths.

Law enforcement sources told CBS Boston that Greenlaw and O’Connor were found shot to death and dismembered, their bodies wrapped in rugs and plastic in the basement.

The bodies were found after a woman ran from the home, flagged down a car and was driven to a police station. Essex District Attorney Jon Blodgett said the home was known to police.

Hebb was arrested Monday at a Peabody apartment building.

On Tuesday afternoon, an arrest warrant was issued for a second suspect in the murders, Wes Doughty, who is considered to be armed and dangerous, according to CBS Boston. Sources told the station that an Acura believed to have been driven by Doughty was found in Salem.

Police say Doughty may be in towns where he has spent time in the past, including Peabody, Salem, Lynn, Danvers, Middleton and Topsfield.

Hebb’s attorney did not argue for bail and said Hebb is cooperating with police.

“I’m sure there’s a story there,” defense attorney Raymond Buso said, without addressing specifics of the case. “Clearly there’s a lot more than what’s been reported in the last 48 hours in the press.”

Buso told CBS Boston he wasn’t designated as Hebb’s attorney until after the suspect talked to police for nearly two hours.

“I can tell you he gave a recorded statement after he was arrested yesterday about his involvement and other people’s,” Buso told the station.

The judge sealed the case at the prosecution’s request.

O’Connor’s father, Edward O’Connor, said her lifetime of health problems - including leukemia as a child, a stroke as a teenager and an almost fatal bout with a flesh-eating disease - led to drug and alcohol abuse.

“Because of all the issues Jen has had, we have mourned her several times, so it’s just a continuation of the mourning process,” O’Connor told CBS Boston. “It’s been tough, it’s really been tough.”

Hebb is due back in court March 28.

Anyone who sees Doughty is urged not to approach him, but to immediately call 911 or contact Massachusetts State Police at 1-800-KAPTURE. Anyone with information about his whereabouts is also asked to call the tipline.