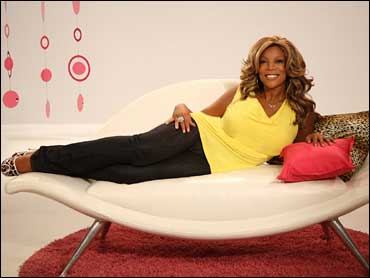 Hailed as "The Queen of Radio," radio personality/TV talk show host and New York Times best selling author Wendy Williams is determined to prove that her bark is worse than her bite.

She may not be your typical daytime TV talk show host like Oprah or Ellen, with her signature saying "How you doing?" her tell-it-like-it-is attitude and her fabulous hairdos, high heels and minis - but that's fine with her fans.

Williams, who has a cult-like following from her New York radio talk show "The Wendy Williams Experience," brings a certain edge to her funky TV set that's donned with a shimmering disco ball, hot pink walls and leopard pillows.

The feisty 44-year-old's daytime talk show, "The Wendy Williams Show" is on a six-week trial run in New York, Los Angeles, Dallas-Forth Worth and Detroit until it meets its desired ratings to become a permanent syndicated gig by the end of August.

Dishing celebrity gossip and advice on the airwaves, asking unexpected questions and putting in more than her two cents has been a recipe for success for Williams - qualities that she hopes will transition onto the TV screen.

"I am a grown woman with a very wide-eyed curiosity about the world around me regarding pop culture," Williams told CBSNews.com. "We dabble in politics on the show - and dabble being the operative word. I love fashion, make-up, movies and TV. I love to read The Enquirer and Life & Style Weekly. I love being a woman and that it's very important that this show embodies a modern woman."

Although Williams always had a dedicated fan base, her heated radio interview with Whitney Houston really put her on the radar in 2003 and expanded her fan base.

"I think that the people who are threatened by what I say are people who might have things to hide themselves or it might startle them because they might not have come to terms with how to answer the question," she said.

"One of the classic cases would be Whitney Houston. There was no denying that Whitney was apparently on something. This was two weeks after the big Diane Sawyer interview and she clearly wasn't in her right mind either, but this is years later and she is a sober woman and she is working on her new material. I would love to have Whitney on the show," Williams said.

The ruffling of feathers didn't stop there though.

The New Jersey native continued to push buttons with Sean "P.Diddy" Combs, Tupac and Mariah Carey, among others.

"Puffy, much like Whitney I guess, are used to controlled interviews. I find that with many celebrities, particularly black celebrities it's ok when Cindy Adams (New York Post gossip columnist) or Ted Casablanca (E! Online's weekly gossip columnist) say something, but when a black journalist (and I don't consider myself to be a journalist but for all intensive purposes I'll say that) does it's beating up on a brother or sister. No I am not, I am commenting on in the top 15 things that are going on in pop culture right now that people care about. So that's on them, it's not on me. I am not a mean woman."

More drama came her way when Omarosa Manigault-Stallworth, the vindictive, attention-grabbing contestant on "The Apprentice," was a guest on her TV show. Omarosa, who was supposed to promote her new book "The Bitch Switch," flipped the switch and started a petty catfight.

"In my own twisted way, I even enjoyed Omarosa because she brought me attention that I wasn't counting on. I didn't know Omarosa before the interview and I don't know her after the interview. She came on with a clear agenda."

According to Williams, she could have called her names or thrown her off the set, but instead she held her tongue.

"My show is not a Jerry Springer-type show. It's not a show of confrontation," she said.

In Williams' defense, she has had her own share of rough patches throughout her 22-year career on the radio involving sexism, racism, drug use, her husband's infidelity and a recent sexual harassment complaint filed against him by Williams' talent booker Nicole Spence.

Williams has also revealed her vulnerable side by discussing her miscarriages, weight issues and plastic surgery.

Today, Williams is turning a new leaf juggling her two shows, motherhood and married life in suburbia. She may still have battle scars, but with age, she is evolving.

"In my modern life, the people that I admire are Oprah. I admire Howard (Stern). No woman's list would be complete without Oprah," she admitted.

Williams also draws inspiration from her mother, who is retired school teacher. She raised three children (Wendy, her sister and brother) with Williams' father, who are still happily married and healthy in their 70's.

"She did it all while keeping her nails done, some sort of sex appeal for my father and food in the house … she just paved the way. As a woman, I think she is absolutely incredible," Williams said.

The Obamas are also an inspiration on her list.

As the media chameleon mentioned, she "dabbles" in politics and isn't keeping quiet about who she is endorsing.

Williams had presidential hopeful Sen. Barack Obama on her radio show in the past before he nabbed the presidential nod.

Although she is openly an Obama supporter, she would like to interview the woman that keeps him in check - his wife Michelle.

"More so than Barack, I think you learn more about a man based the woman he is with. I'd love to sit and have a great conversation with Michelle Obama. I would take Michelle Obama in a heartbeat, she and I are the same age," she said.

Reminiscent of her family's past, Williams is thrilled with the positive image that the Obamas bring to the black American family.

"I think this is the great time for the black family in America," she said.

For more information on The Wendy Williams Show visit: