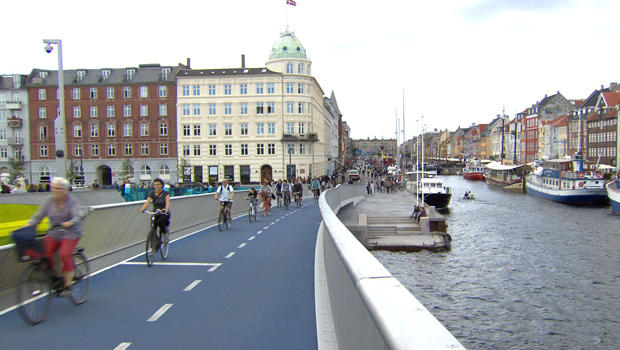 With this year’s updated U.N. rankings due out tomorrow, the country that’s defending its title as the world’s champion of happiness is, quite possibly, NOT your first guess: Faith Salie reports our Cover Story:

Welcome to Denmark, a small country of nearly six million people. No tropical beaches here -- just rain for about 50% of the year. But despite the weather, this country still maintains a sunny disposition … so sunny, in fact, it’s been named the happiest country in the world.

“What we find when we study happiness around the world is that the definition is quite similar,” said Jeffrey Sachs, an author of the United Nations’ World Happiness Report, which ranks the happiness of 156 countries, and consistently places Denmark at or near the top of the list.

Last year, America came in 13th place, behind Israel, and just a few notches ahead of Mexico and Brazil.

It’s a ranking that might leave us scratching our heads. Americans love to chant, “We’re Number One!” but we aren’t always. What does Denmark have that we don’t? Free healthcare, for one. And free education. And what about maternity leave?

“I think it’s 12 months in which the parents can share,” said Meik Wiking, CEO of the Happiness Institute, located in Copenhagen. “Five weeks of paid vacation per year. It’s not bad!”

Salie asked, “How can we be as happy as you guys?”

“I think it’s the welfare state,” Wiking replied. “It is focusing on reducing extreme unhappiness, and investing in public goods that create quality of life for all.”

But this comes at a steep cost. Danes pay more income tax than any other nationality -- as much as 60%.

“If you asks Danes, ‘Are you happily paying your tax?’ Eight out of ten will say, ‘Yes, to some degree I’m happily paying my tax,’” Wiking said. “And I think that’s because people are aware of the huge benefits they get in terms of quality of life.”

Sachs says there are other benefits, too, like the fact that Denmark has one of the highest income equality and lowest poverty rates of any Western nation.

“Basically, social mobility is high because the obstacles are very, very low,” he said. “You’re really given the basics for a good, healthy, productive life.”

“What do you say to someone who’s like, ‘Yeah, but that’s socialism and we’re Americans’?” Salie asked.

“I say it’s what they call social democracy. The idea, is, ‘We’re a market economy. We’re privately owned. We better compete,’ so they have to be at the top of the game in technology, in research and development, in science, in quality of education.”

While Denmark excels in these areas, not everyone would call it a utopia.

“Danish people don’t strike me as cheerful, so much as just, like, content: Everything’s fine.” Salie noted.

“You can say, we are the happiest country in the world,” said Wiking. “I like to say, we’re the least unhappy.”

Danes still face the same struggles as everyone else. The country has the highest cancer rate in the world, in part due to its smoking and drinking habits. Large portions of the population also suffer from alcoholism and depression.

Still, it hasn’t stopped Americans like Dina Honour from moving here. What surprised her the most about living in Denmark? “How much we like it!” she laughed.

Originally from Boston, Honour moved to Copenhagen in 2011 with her British husband Richard and their two sons. They liked it so much, they decided to stay.

“Family life balance is phenomenally better than it would be back in the U.S.,” she told Salie. “The Danes, they leave work at five o’clock and they’re home for dinner by 5:30, so Richard is home for dinner every single night. We both agree that it’s probably the best decision that we’ve made as a family.”

The family has adopted two uniquely Danish philosophies, that they say keep Danes smiling a bit more than the rest of us.

“Hygge” encourages people to enjoy life’s simple pleasures. “There’s no real translation into English,” said Richard Steggall. “It is a Danish phenomenon. It is a Danish thing. You know, for quite a large part of the year, it gets quite gray here, gets dark very early in the afternoon. And hygge, this sense of bringing light and warmth and friendship into a house, it’s trying to make things cozy and happy.”

The second uniquely Danish term is something called “The Law of Jante.” For Danes, that means living simply. Showing off wealth just isn’t their style.

“It seems like in order for America to borrow from this Danish notion of happiness, Americans would have to give up things that are so prized, like exceptionalism and competitiveness,” said Salie.

“Yeah, I struggle with that myself,” Honour laughed. “I think maybe we just need to focus a little bit more on helping others and taking others into consideration. And I don’t think that means abandoning the idea of the individual. I think it just means finding a little bit more of a balance.”

It’s a philosophy that’s even mentioned on the government’s website, which says money is not as important as social life.

So maybe the elusive secret to happiness isn’t that much of a secret after all.

Philosophers, Sachs noted, “have been telling us for millennia, ‘Don’t just chase the money.‘ They’re right. America’s gotten richer, a lot richer, over the last 50 years. But we’ve not gotten happier.”

It’s worth pondering how we Americans can get our hygge on.