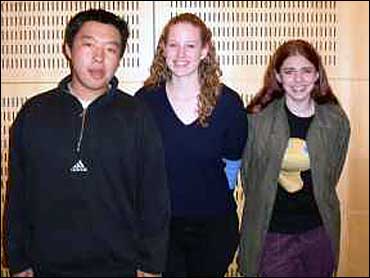 For the past five years I've had the privilege of being a judge at the Cable & Wireless Childnet Awards. Childnet International, a London-based nonprofit group, scours the world for Web sites and other online projects that benefit children. British communications company Cable & Wireless provides financial support for the awards, but the decisions are made by an independent panel of judges from around the world.

The judges look for projects that benefit children across borders and strongly prefer programs that deeply involve young people. To that end, many of the Web sites recognized are actually run by people under 18.

Separate awards are given for projects run by individuals, nonprofit organizations and schools. There is also a "New to the Net" category to recognize projects with great potential -- sometimes from developing countries -- that have not yet had a chance to fully demonstrate what they can accomplish.

I'm writing from London, where this year's awards ceremony took place on Thursday, April 24. Previous ceremonies have been in Paris, Barbados, Washington, D.C., and Sydney after a London debut in 1998. (Disclosure: Judges aren't paid, but our travel expenses are covered by Childnet.) Don't expect this to be a dispassionate "objective" report. I don't mind sharing the fact that I love this organization.

Unlike some other Internet awards programs, Childnet does not reward glitz, flash or commercial prowess. The emphasis is on a site's impact on children in both the country where the site was created and in other countries. Unlike the "webbies" and many other Internet awards programs, there are no commercial categories. That's not to say that there isn't value in commercial sites, but this space is reserved for those who are motivated by achieving social, not financial, rewards. Awards organizer Stephen Carrick-Davies calls it the "dot hope effect."

This year's competition attracted entries from 50 countries on all continents; 12 projects were selected as first-, second- or third-place winners.

My job was to judge the individual category where three outstanding projects were selected. First-place winner Heather Lawver of Virginia was one of the few Americans recognized at this year's ceremony. Her Web site, The Daily Prophet, at first resembles a Harry Potter fan site, but when you examine it closely you realize that it's actually an educational site that encourages Harry Potter fans around the world not only to read the works of J.K. Rowling and other authors, but to contribute to the site as columnists. Heather manages a volunteer "staff" of 100 writers and, as my editors can testify, managing writers is a difficult task for anyone, let alone a teenage "Web mistress" who founded the site three years ago when she was 14.

The second-place winner in the category is 16-year-old Andrew Fei from Australia, whose Web site KidzDom is an outstanding example of how kids -- not just corporations -- are capable of creating great entertainment sites. The KidzDom site includes animated cartoons, coloring books and short films. But it doesn't just display cartoons. It teaches children to create their own animations.

Third-place winner Sarah Bowler, a 13-year-old from the United Kingdom, has succeeded where other environmentalists have failed. Her Web site Cool Kids for a Cool Climate has finally given me a concrete sense of the environmental impact of my travels by pointing out how "burning petrol, diesel and aircraft fuel contribute to global warming." The tree calculator on Sara's Web site shows that I need to plant more than seven trees to make up for my 10,720-mile round-trip flight between San Francisco and London. A commuter who drives 20 miles a day, 200 days a year is in debt for 1,600 trees. Take a bus or train to work and you'll spend 500 trees a year. If you can't plant your own trees, Sara will plant them for you in exchange for a donation to cover costs. Her site isn't as sophisticated as some of the others, but it remains an example of how a young person can turn concern into action.

First place in the not-for-profit category went to Britain's largest children's hospital, Great Ormond Street Hospital here in London (www.gosh.nhs.uk/kidsandteens). There is nothing fun about being sick, yet this child-friendly site is both entertaining and educational. It also gives young patients an opportunity to interact in a secure environment.

The No. 2 spot went to YouthNOISE.com, a Washington-based group that believes that teenagers should be heard as well as seen. The site provides a forum for "noisemakers" to raise their voice on social, personal and political issues. The site has quizzes, polls and forums for kids to talk with each other and recently began offering members an opportunity to deliver messages of support to Iraqi children victimized by war as well as the children of service men and women who have been affected by the conflict. Third place in this category went to a very creative project that integrates live theater, technology and internationalism. WebPlay.org links schoolchildren in Los Angeles and London who collaborate on plays that they write and perform.

More information about these sites as well as the Schools and New to the Net categories can be found at www.childnetawards.org.

Watch out for these Facebook privacy hoaxes
Thanks for reading CBS NEWS.
Create your free account or log in
for more features.
View CBS News In
CBS News App Open
Chrome Safari Continue
Be the first to know
Get browser notifications for breaking news, live events, and exclusive reporting.