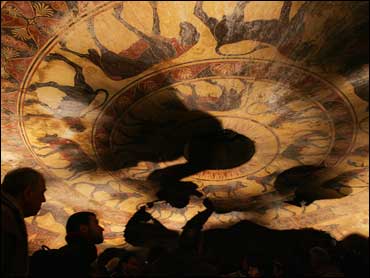 Since it was started in 1797, the sublime, the vainglorious and the ancient have merged and blended to make Villa Torlonia one of the most intriguing and exquisite examples of 18th century building in Rome.

Giovanni Torlonia made his fortune in banking, bought a title and then built a house he hoped would give him entrée to the social elite. He never made it, but not for lack of trying.

An Egyptian theme room is complete with hieroglyphics. Breakfast was eaten under frescoes depicting the conquests of Alexander the Great. What today may seem overdone to the point of kitsch was very much the style of the times.

"We're in a Renaissance room and we walk though a door and we're in a Gothic room," Alberta Campitell, superintendent of Rome's historical parks and villas, told Sunday Morning correspondent Allen Pizzey.

The villa is undergoing a six million dollar restoration, a labor of love for Campitelli.

"Look also at the doors, all the doors are painted," she said as she walked through the villa with Pizzey. "They are very beautiful, with gold. It's really gold."

The restoration is providing Romans a unique insight into a way of life often thought of as more elegant times, but which turns out to be not that much different from today, at least when it comes to the "nouveau riche" equating wealth with class and style.

The ballroom is a classic example. Overlooking the dancers was a copy of Rafaello's fresco of a meeting on Mount Parnassus, retouched with willful disregard for historical context. The Greek poet Homer is shown sitting next to Dante Alighieri who is just a short reach away from Sir Isaac Newton sharing space with Galileo. The beauty hides a crude but not unusual aspiration of the time: refinement by association.

"So I have all these intelligent people in my villa, paintings, therefore I too am intelligent," Campitelli said.

There is also the not-so-subtle frieze of poets' faces, one of which has been painted over and replaced by the face of one of the Torlonia children.

One effort at self-aggrandizement that had no success at all was a plan to put the family crest atop a fake Egyptian obelisk. The pope of the day told Signor Torlonia the space was for crucifixes only.

Why anyone thought fakes were necessary in grounds that have been in use since before the dawn of Christianity is puzzling. Even digging the garden here is an adventure in history. The place is littered with things like a 1,800-year-old pot handle.

And there is some serious filling in to be done. These workmen are making a new top for one of the hidden mysteries of Villa Torlonia. When restoration began, a small hole was found under some stones which revealed a secret that even now can only be reached by a specially constructed passage.

It looks like an Etruscan tomb, complete with alcoves for burial urns, paintings of animals — all of which seem authentic, except this was built in 1840. Available information indicates it was used for secret Masonic rites.

Whatever went on in the fake tomb was history by the 1920s when the villa was rented out for the token sum of one Italian lira. But then the new tenant was not a personage with whom a landlord quibbled.

Benito Mussolini was as much a would-be sophisticate as the villa's original owners had been.

His daughter's wedding was held there. It was an event as lavish as the setting.

Like anyone else, Mussolini made his own modifications, although not with the same style, taste or purpose as his predecessors. Deep under the ornate rooms he had an austere bunker — a bolt hole from modern warfare that had served a far earlier purpose ... an ancient tomb.

"This is a Roman tomb from the second century after Christ was dead and we found here also three skeletons," Campitelli said.

An anti-gas door leads to yet another bunker with added plumbing, special showers to wash off poison gas.

"Mussolini wanted this bunker because he was terrified by the gas," Campitelli said. "He knew the gas during the first World War and then he decided to have his room."

The bunker was never used. Months before Allied forces arrived, Mussolini abandoned the villa and fled from Rome. The Allies of course appropriated whatever real estate they felt they needed, including the Villa Torlonia.

Like any new tenants, they redecorated to reflect their own tastes, or lack thereof. A guide plaque refers to the period as the "disastrous" Allied occupation. When the war ended the villa fell into twenty years of disuse and disrepair.

The renewed interest owes much to the fact that Mussolini slept here, under a tromp l'oieul ceiling with an exquisite fresco. Italians are not exactly nostalgic but they are curious about their once-vilified past, and about a time that was in many ways different -151; and in others so much like our own.