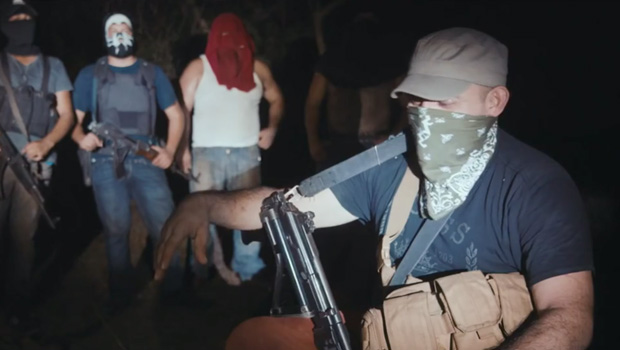 With just a week before the annual Academy Awards ceremony, viewers can catch up with the five nominees for the Best Documentary Feature Oscar, currently available to view online via streaming service Netflix, or from video-on-demand services like Amazon, Google Play, iTunes and Vudu.

In what has been a particularly strong year for non-fiction, the five nominated features (chosen from out of 124 films submitted) are a diverse mix of investigative journalism, history in the making, and profiles of musical artists.

Trailers for each of the nominees are below, along with links to online viewing options. Catch up with the nominees before the Oscars are handed out, next Sunday, February 28!

"Amy" - Director Asif Kapadia's acclaimed portrait of the turbulent life of six-time Grammy-winning singer Amy Winehouse, whose brilliant career was eclipsed by addiction issues, is captured in amateur footage, period interviews and performance clips that remind us, painfully, how much music lovers were denied by her tragic death at age 27.

"Cartel Land" - Winner of directing and cinematography awards at this year's Sundance Film Festival, the movie traces efforts on both sides of the U.S.-Mexico border to combat violent drug cartels. It's an impossibly difficult mission, especially when -- as this documentary reveals -- security forces charged with stopping the cartels are out cooking meth themselves.

Watch via streaming on Netflix, or VOD, including Amazon, Google Play, iTunes, Vimeo and Vudu. Also available on Blu-ray/DVD.

"The Look of Silence" - The families of victims of the Indonesian genocide of 1965 sit down with the bafflingly proud perpetrators of mass murder, in Joshua Oppenheimer's follow-up to his acclaimed 2012 documentary, "The Act of Killing. It's a powerful story of the anti-Communist genocide waged by Indonesia's military regime, and its survivors' search for reconciliation and peace.

"What Happened, Miss Simone?" - A portrait of singer, musician and civil rights activist Nina Simone, the "High Priestess of Soul."

Available via streaming from Netflix.

"Winter on Fire: Ukraine's Fight for Freedom" - A view from the street of the 2014 protest movement in Ukraine, and the uprising that ousted President Viktor Yanukovych -- a history written by the winners. In spite of an unnecessary music score, the film powerfully tracks the price paid by protestors standing up against violent reprisals from riot police and hired thugs, with astonishing footage captured on the front lines of the street battles in Kiev.

Available via streaming from Netflix.