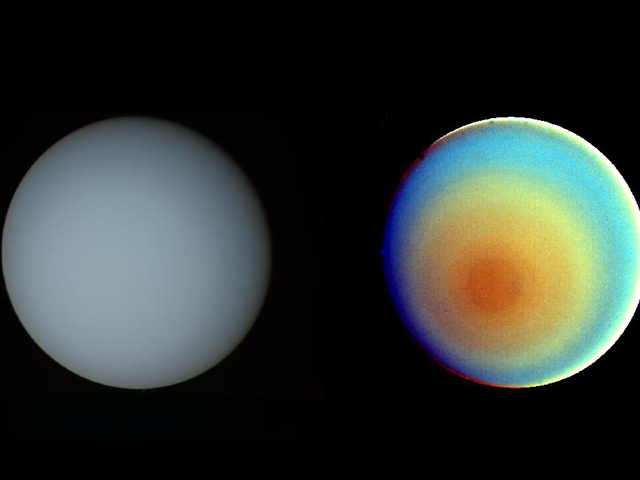 Scientists are calling it "Uranus, interrupted." For a moment on Thursday, Uranus disappeared from the sky, eclipsed briefly by the moon.

"The moon is going to cover up - we say photobomb - Uranus," Slooh astronomer Bob Berman told CBS News. "That is surprisingly rare to see the moon occult a planet in the solar system. Uranus isn't the brightest of all of them but anybody can see it with binoculars."

Armchair astronomers, mostly in Australia and other parts of the southern hemisphere, got the chance to see the moon block Earth's view of this strange, green planet. The event was expected to kick off 3 p.m. Thursday on the East Coast - just before sunrise in Australia Friday - and last for about an hour.

For those watching the event, the bright side of the crescent moon covered up Uranus and then the planet emerged from the dark, unlit side of the moon.

"Watching Uranus telescopically vanish behind the detailed, sunlit portion of the Moon and then suddenly emerge from the lunar dark side, should be pretty dramatic," Berman said before the event, adding that the view seen will differ depending on where you are located in Australia.

Outside of the photobomb zone around Australia and New Zealand, observers in the rest of the world will see Uranus close to the crescent Moon in the eastern pre-dawn sky.

The only way for Americans to see it is via a live stream operated by Slooh, a community observatory that works to increase public awareness of astronomy.

Uranus' discovery in 1781 was huge news, since no one imagined additional planets existed beyond the five known since pre-history. Scientists later learned it orbits with its poles "on its side" so that its seasons each last for 21 years. It also has grabbed the imagination with its retinue of bizarre moons and its unique green color as well as the rings encircling it.

Still, Berman acknowledged Thursday's event so far hasn't drawn the kind of attention that a solar eclipse or lunar eclipse might.

"The public doesn't know about Uranus," he said. "Most people aren't going to get up at 4 in the morning, dig out their binoculars from some drawer ... It's not like a total solar eclipse, where even if you don't care about science, you will have your mind blown by it."

It is more likely to resonate with scientists who can appreciate the fact that "it's the only green thing in the sky, it will vanish and reappear suddenly and was the time tested way of telling the distance to the moon."

But even for them, there is not much to be gained other than witnessing a cool event.

While a solar eclipse offers scientists a chance to directly observe the interactions between different layers of the sun's atmosphere, known as the photosphere, chromosphere and the solar corona, this event does little more than confirm what we already know about Uranus. Even using it tell the distance to the moon is unnecessary, ever since Apollo 11 astronauts placed laser ranging retroreflector on the moon back in 1969.

Aside from losing its cachet as a scientific measurement tool, the planet has struggled to escape its name, which has long has been the target of silly jokes among school children (and, let's face it, adults).

"I love it just because it's green. There is nothing else as green in the whole solar system," Berman said. "Plus, a lot of people don't realize it but this was the thing that most astonished the world. Nobody thinks of it today. It's the butt of jokes ... For a while, there was nothing bigger than Uranus."