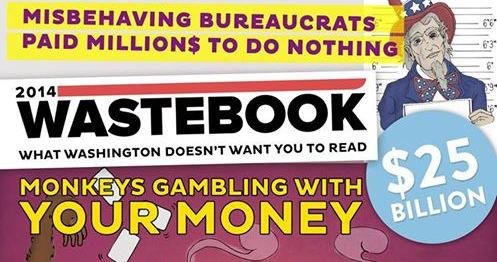 Washington is often accused of doing nothing, and the current Congress is on track to be one of the least productive in history.

However, as CBS News correspondent Nancy Cordes reports, there is one area where Congress has stayed busy -- spending money.

One government program spent $190,000 to study compost digested by worms. Another $856,000 went to train mountain lions to walk on treadmills, $10,000 for an Oregon children's theater production of "Zombie in Love" and $46,000 for a snowmobile competition in Michigan. Also, $414,000 was spent to update an Army video game meant to spur recruitment, a project already more than $25 million over budget.

All this, plus rabbit massages at Ohio State University, butterfly farms on Oklahoma tribal lands and an Iron Man suit under development at the Department of Defense.

These expenses all feature in Oklahoma Sen. Tom Coburn's annual "Wastebook," a ranking of 2014's top 100 worst examples of government waste, including out-of-this-world spending on research projects designed by grade school students to be sent to the International Space Station.

"Laughing classes -- we're paying people to understand -- to teach people how to laugh, there's a lot of serious problems in this country, well maybe the reason people aren't laughing is because the government's so inept," Coburn said.

Coburn, who's retiring, has been producing the Wastebook for five years. He said it's making a difference.

"We should be ashamed that we're wasting money the way that we are," Coburn said. "So if we're watching and we're holding people accountable, we'll get better value for the taxes that we pay and we won't risk the future of our kids."