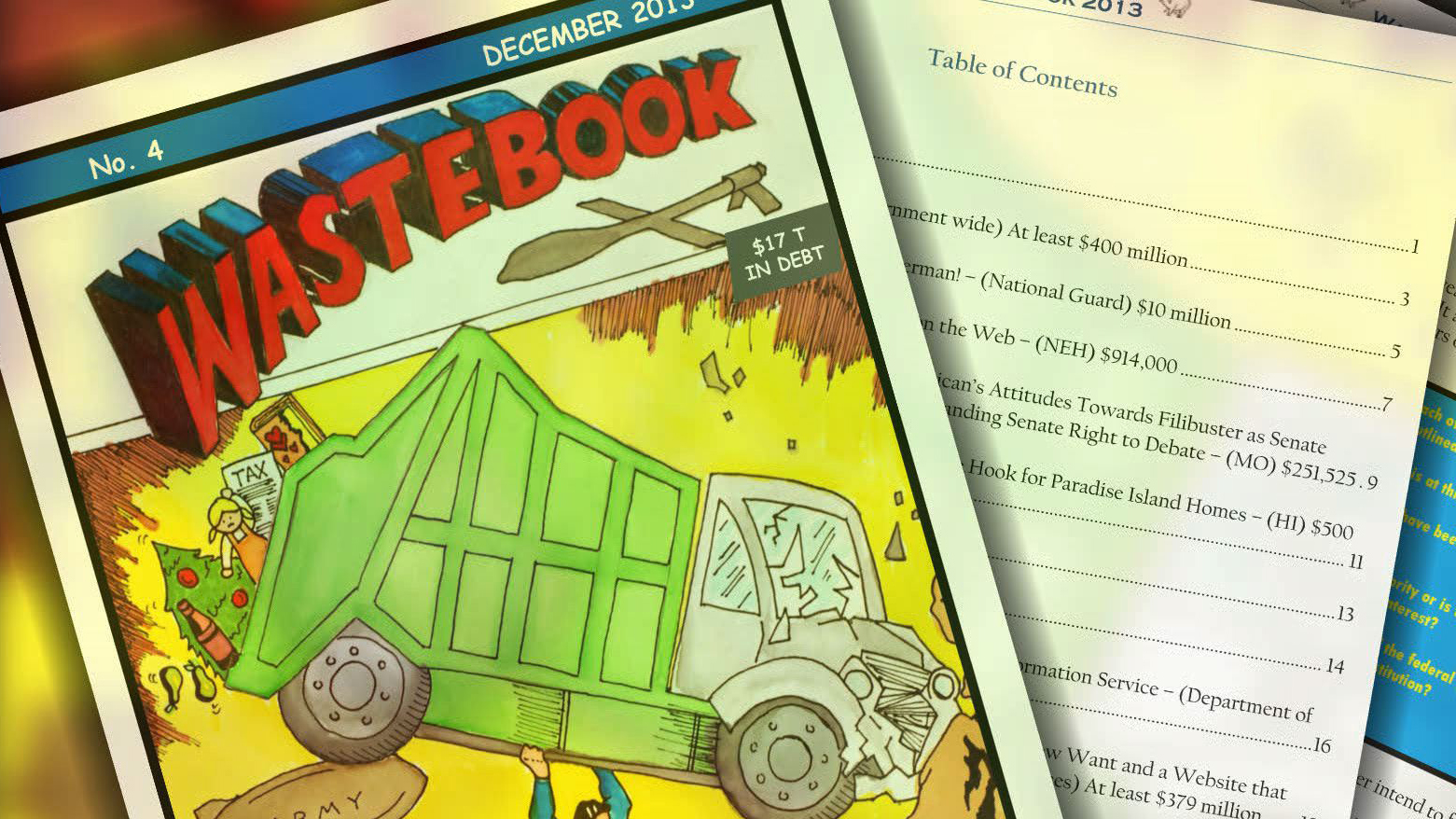 One million dollars to build a bus stop in Virginia. Five million for customized crystal stemware. Those are just some of the items paid for by the federal government last year. A new report out Tuesday by a prominent Republican senator, called the "Wastebook," details $30 billion in questionable spending.

See the report below:


Some of the numbers are staggering, such as the $7 billion worth of U.S. military equipment being destroyed as U.S. troops pull out of Afghanistan, or the nearly $1.5 billion to keep the lights on in unused or underutilized federal buildings.

Then there's spending that just seems silly, such as a nearly $1 million grant for something called the "Popular Romance Project" -- a website and documentary that celebrates romantic movies, books and pop songs.

The list goes on: $2 million to renovate a rarely-visited Civil War grist mill in Virginia, and $3 million for NASA employees to attend seminars on how Congress works.

The "Wastebook" is the work of Sen. Tom Coburn, R-Okla., a longtime deficit hawk. He said to CBS News' Nancy Cordes in a recent interview, "Where was the adult in the room when this was going on? … (The report is) a compilation of about $30 billion of stupidity, incompetence, and waste."

Congress has banned "earmarks," those pork barrel special interest projects that were used to grease palms in Washington. But other types of waste have proved tougher to tackle, such as the $3.6 billion in unpaid income taxes from federal employees and retirees -- or the $400 million paid to government workers to do nothing during the government shutdown.

Asked how long he has been putting the book out, Coburn said, "This is the 5th or 6th year."

Cordes asked, "And have you ever gotten any traction in Congress, where members say, 'We're actually going to get rid of this?'"

"No," Coburn said. "They don't pay attention to it. It's hard work to get rid of junk, it's hard work to do oversight, it's hard work to hold the agencies accountable. And so what they would rather do is look good at home, get re-elected, and continue to spend money, and that's Republican and Democrat alike."

Cordes also remarked on the report's characterization of some expenditures. "Some of your examples are kind of in the eye of the beholder, for example you say, all the money spent creating the Obamacare website was a waste, while some Democrats would disagree with that."

Coburn said, "I wouldn't complain about the website if it worked, but it didn’t work. It still doesn’t work. It's not the level of performance that we should expect from spending hundreds of millions of dollars to get something up – all right, and that’s a great subject, one of the things that’s not in this "Wastebook" is the federal government spends $82 billion dollars a year, $82 billion on it. Half of it is wasted. All right, half of it!"

On "CBS This Morning," Cordes added that Coburn argues it doesn't really matter whether the priorities laid out in the report are Republican or Democrat. He says the question is, "Can we afford to do things like pay people to 'like' the State Department on Facebook when we're borrowing hundreds of millions of dollars a year?"