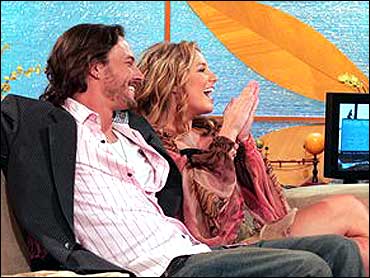 In a new interview, Shar Jackson says she and Kevin Federline were still together when he and Britney Spears began dating last year.

Jackson, then pregnant with her second child with Federline, says the truth came out only after he flew abroad for a commercial, which became a months-long trip with Spears.

Federline and Spears were wed last year; their son was born in September.

"How do you call yourself a human being knowing that you put somebody else through that pain?" Jackson asks of Spears in the December issue of Sister 2 Sister magazine. "That's a vicious cycle right there, man. We gotta break that."

Jackson, 29, and Federline have a 3-year-old daughter, Kori, and a son, Kaleb, born in July 2004. Jackson, who co-starred in the TV series "Moesha," has two older children from a previous relationship.

She and Federline "are still really good friends," Jackson says, but she doesn't want child support.

"Hell no. I am a very, very independent woman, OK? If I wanted child support that's an easy procedure," she tells the magazine.

Instead, "All I want from Kevin is his time with his children. That's it, bottom line."

Jackson is working on an album, her first. A track from Federline's debut recently appeared on the Internet by Disco D, the producer of his upcoming album, "The Truth," to be released next year.

Though the song has since been taken off Disco D's Web site, it has popped up elsewhere, giving a glimpse of Mr. Britney Spears' rhyming abilities.

"Back then, they called me K-Fed, but you can call me Daddy instead," he intones in the chorus of "Y'all Ain't Ready."

Already garnering comparisons to Vanilla Ice, Federline's album appears destined for late-night punch lines. But the 27-year-old does anticipate some backlash from his musical pursuits: "My prediction is that y'all gonna hate on the style we create, straight 2008."