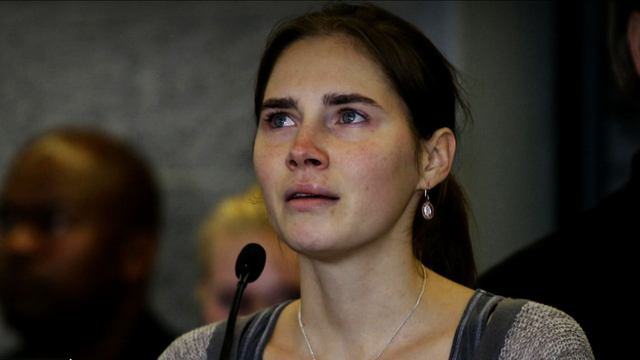 CHICAGO - During the trials of Amanda Knox in Italy, labels came fast and furious at the American student – mostly furious. Knox was stamped a she-devil and her persona demonic.  But one label has been overlooked – political.  Amazingly, that single label could mean Amanda Knox will never again see the inside of an Italian prison.  It is a slice of the sensational murder case more "Face The Nation" than "CSI."

In 2009, Knox and her co-defendant Raffaele Sollecito were convicted of murdering British student Meredith Kercher in Perugia. The two immediately appealed their conviction.  In 2011, appellate court judge Claudio Hellmann acquitted the defendants.  Knox and Sollecito were freed after each had spent 1,427 days in prison - almost four years. Following the verdict, judge Hellmann didn’t pull punches.  He declared: “the evidence was nonsense.”  Suddenly, several prosecutors and judges became the targets of criticism claiming they had mishandled the case from the beginning.

The vice-president of Italy’s judicial oversight committee, Michele Vietti, immediately warned against politicizing the case.  Many paid heed. However, Rocco Girlanda did not.

At the time, Girlanda was a member of the Italian Parliament from Perugia.  His political party was the PdL (Popolo della Libertà) which was also the party of then Italian Prime Minister, Silvio Berlusconi.  Girlanda and ten other members of Parliament signed a letter asking Italy’s president to investigate the Knox-Sollecito prosecutors.  In addition,  Raffaelle Sollecito’s lawyer, Guilia Boungiorno, was also in Parliament, head of its Judiciary Committee, and a member of Berlusconi’s political party.

For his part, Berlusconi and his party were at war with Italy’s prosecutors and judges.  The Prime Minister was trying to reign in their investigative powers.  Prosecutors, for their part, were trying to put Berlusconi in jail.

Some may see a conspiracy looming here. Take heart, there is none.  There is, however, a good question: did the Knox-Sollecito case become politicized?

Though Hellmann did not name the political party, it wasn’t the party of Berlusconi, Girlanda, and Boungiorno. Was it prosecutors pushing back against Berlusconi and his crew?

This wasn’t the first time Claudio Hellmann raised the possibility that political considerations were helping drive the pursuit of Knox and Sollecito.  In October 2011, he told La Nazione newspaper that there was “a political background” to the case.  It was directed squarely at Amanda Knox. Hellmann said, “Many wanted Amanda in prison because she was an American.”

Now that Amanda Knox has, again, been found guilty of the murder of Meredith Kercher, extradition to Italy has entered the conversation.  That discussion, so far has focused on whether a U.S. citizen’s Fifth Amendment right against double-jeopardy would protect the Seattle university student from extradition.

Fair enough.  But missing is a reading of the bilateral extradition treaty between the United States and Italy.  Specifically, Article 5 of the treaty, which reads:

These seem to be reasonable questions given Claudio Hellmann’s comments. They deserve answers.