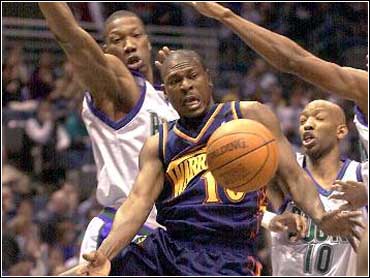 So what if the Golden State Warriors were missing their top three scorers? Donyell Marshall looked like he could have beaten the Milwaukee Bucks five-on-one.

Marshall had a career-high 37 points and a season-high 21 rebounds as the Warriors beat the reeling Bucks 91-86 on Wednesday night for their third victory in four games.

Using rim-rocking dunks, feather-soft outside shots and powerful rebounding, Marshall even amazed his teammates with the self-described best game of his career.

"He was an animal. He was a monster," said Mookie Blaylock, who had 14 assists. "I've been trying to get the animal to come out of his cage. He did it tonight."

Erick Dampier added 12 points and 10 rebounds for the Warriors, who posted an improbable win despite playing without injured Antawn Jamison, Chris Mills and Larry Hughes, who was a last-minute scratch because of a sprained ankle.

Marshall's performance, which included 21 second-half points and eight offensive rebounds, gave Milwaukee a six-game homecourt losing streak. He seemed to be everywhere at once, scoring inside and outside while rebounding over both teams' tallest players. He also played solid defense on Glenn Robinson, which he said was his favorite part of the game.

Marshall credited Blaylock with bringing out the monster in him.

"Mookie pulled me aside before the game and said we going to run it to me all night," Marshall said. "He always yells at me when I'm not focused, and I try to play harder when he does it. I was able to stay focused for the whole game tonight."

The Warriors snapped a fie-game road losing streak with just their sixth victory away from Oakland this season.

The Bucks have lost seven of their last eight games overall and a season-high four straight, which includes consecutive losses to Vancouver, Washington and Golden State. Their confidence obviously shaken, the Bucks allowed the Warriors to stay close through three quarters and then choked on the big shots at the end.

"We were tight," coach George Karl said. "Our confidence was not at a high level. We were shaken because of what's been happening with this team."

Marshall and Dampier led a 12-3 Warriors run to start the fourth. Marshall tipped in his own miss with 9:18 to play to give Golden State an 80-74 lead, bringing loud boos for the Bucks from the scarce Bradley Center crowd.

Milwaukee cut the lead to 85-84 with 2:30 left, but after turnovers by both teams, Marshall hit a free throw and a leaning jumper with 45 seconds left to boost Golden State's lead to 88-84.

After Glenn Robinson hit a jumper, Ervin Johnson blocked Marshall's jump shot attempt but then missed a short jumper for Milwaukee with 10 seconds left. Jason Caffey made one of two free throws, and Tim Thomas' 3-point shot with three seconds left was in and out. Marshall added two free throws to set his career-high.

"I don't think anything is wrong," Robinson said. "We're just going through a tough period of the season, and we've got to clean it up."

The Bucks, who were fighting for homecourt advantage in the playoffs just two weeks ago, are just one game ahead of Orlando for the Eastern Conference's final playoff spot. Milwaukee's Big Three

Robinson, Allen and Sam Cassell failed again, going 24-of-55 from the field.

Karl, who called the Big Three defensive "sieves" after losing to Vancouver on Saturday, refused to criticize his players on Wednesday.

"We've just got to keep plugging away," Karl said. "It's not broken yet. We're still in a pretty good position."

Still, the Bucks are playing tentative basketball, with none of the offensive flair they had earlier in the season. Robinson was his usual step slow on defense, despite matching Allen's team-high 24 points.

"I'm not confident at all that when we go out there, we have a chance to win," Allen said. "On our team, the effort is not being given."