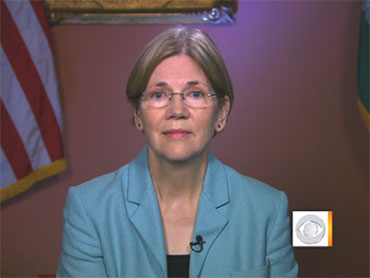 The recession may be technically over, and the economic numbers may be going in the right direction, but much of America doesn't yet feel things are improving.

If there were any doubt, says CBS News senior White House correspondent Bill Plante, President Obama heard it yesterday from frustrated voters, at a televised town hall meeting on which he appeared on CNBC yesterday.

One woman told the president she's "exhausted" from defending him and the change she'd voted for. "I voted for a man who said he was going to change things in a meaningful way for the middle class. I'm one of those people. And I'm waiting, sir. I'm waiting. I, I don't feel it yet."

The president responded with some of his administration's accomplishments, but admitted things still aren't where they need to be.

"As I said before, times are tough for everybody right now, so I understand your frustration," Mr. Obama said. "But what I am saying is, is that we're moving in the right direction.

But the president knows that the only real answer is jobs, and that saying the recovery takes time doesn't play well with voters.

That disillusionment - on both sides of the aisle - is echoed on Main Street.

"I've been disappointed, unbelievably disappointed from both sides," one woman told CBS News "I feel like nothing changes and so there's no point, really. Everything will stay the same no matter what I do, I can vote for or against, and it will stay exactly the same."

Elizabeth Warren, the Harvard University professor who was named by President Obama to set up the Treasury Department's new Consumer Financial Protection Bureau, said that the problems facing the middle class do not invite quick fixes.

"We have to remember that we have a problem in the middle class that didn't just start in the fall of 2008," Warren said on CBS' "The Early Show" this morning.

"We have a problem that's been underway for 30 years, of squeezing, chipping, hitting on the middle class - flat wages, rising core expenses. Families reached a point where they really couldn't save, they turned to credit, and the credit industry has drained billions of dollars out of their pockets. So, it's going to take time to rebuild the middle class, and that really is part of the problem here.

"We're starting now with this new consumer credit bureau, and that's going to be one piece of it. I hope it's going to patch a big hole in the bottom of the economic boat. But there's still work to be done in a lot of areas - on wages, on housing, on student loans, on retirement security.

"Can these industries really be regulated?" asked anchor Harry Smith. "I mean, there would be so much pressure from them for you to do as little as possible. This will be a giant tug-of-war in the days going forward to see who really does get control."

"You know, I'm not a Washington person," Warren said. "I never really wanted a job here. I had this idea for this agency, and thought, 'That's it, you know, other people will take care of it.' The president asked me to come here, and to start to work immediately, not to worry about titles, not to go through all that [confirmation] business, but to start to work to set up this agency, to start pushing back. And that's exactly what I intend to do. And I intend to do it as hard as I can."

President Obama named Warren, 61, to preside over the formation of the new bureau, avoiding a Senate confirmation process in which she faced considerable opposition from Republicans and the financial industry.

Being named a special adviser to the president and to Treasury Secretary Timothy Geithner, Warren avoids a confirmation battle and potential GOP filibuster.

"By charging you with creating this agency, is this the best compromise possible? Because a lot of people wanted you to head the agency, and they said, 'well, you're not confirmable,'" said Smith.

"You know, I don't know the politics. But I don't see this as a compromise at all. There was one option, and that was to go the confirmation route, and I'm told that would take about a year during which I couldn't do any work on the agency and - this is the part that amazes me - I wouldn't be allowed to talk about it. Or, I could not have that title, and I could get to work right now.

"And so I said to the president, I want to go to work right now. I don't care what you call me," Warren said. "Let me go to work and let me try to help. And when I'm no longer any help, I'll leave."