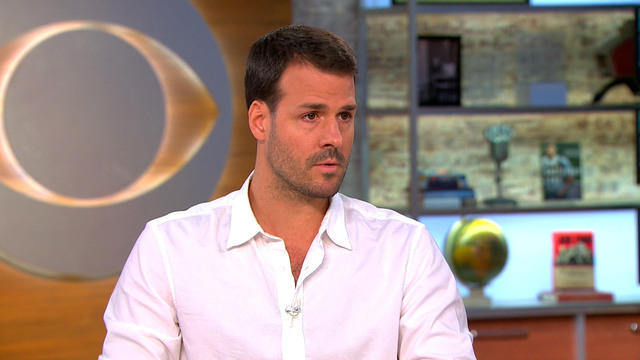 Photographer Jonathan Alpeyrie travels the world to document the stark realities of war. He has covered conflicts in places from Afghanistan to Ethiopia to Ukraine to Egypt, but on a trip to Syria in 2013, Alpeyrie was kidnapped while moving toward the front lines.

His new book, "The Shattered Lens: A War Photographer's True Story of Captivity and Survival in Syria," details the 81-day ordeal. He joined "CBS This Morning" to discuss the harrowing experience and his escape.

It was Alpeyrie third trip into Syria. This time, he had decided to go through Lebanon to cover the fighting near Damascus.

"At the time the rebels ... still had the upper hand and there was an enclave which you get smuggled into and from there I covered the – basically the battle between the Hezbollah infantry and Syrian air force against various rebel forces. And after ten days there, they decided to kidnap me instead of letting me go," he recounted.

The photographer said the moment he was kidnapped felt like it was happening very slowly, like maybe it wasn't actually happening.

"You think it's not really happening and it's not real there's a mistake and everything will get resolved. So usually there's that moment when you think that you're actually dreaming what you're going through."

Alpeyrie was blindfolded, handcuffed and beaten during his 81 days of captivity. He said he endured mock executions, interrogations and head games.

In the book, Alpeyrie recalls how he tried to gain the trust of his captors,  specifically younger soldiers who were curious about him and therefore nicer. Even small favors, he said, "make your life a little easier."

"The torturing and beatings were done mostly by the older officer groups. So I spent a lot of time manipulating those young guys to make sure I would get their favors, like making sure my handcuffs were not as tight, being allowed to go to the bathroom one extra time during the day," he said.

Alpeyrie was finally granted his freedom after a powerful Syrian businessman looking to curry favor with the West paid his ransom.

"He was part of a blacklist that was written down by the European Union and the United States," he said. "They freeze your assets and he wanted that to be gone, obviously, so by paying for me and releasing me he was hoping to give – to get a favor from the United States or France and be freed from it, which happened briefly. And then he was put right back on that list afterwards."

Asked if he'll ever return to Syria, Alpeyrie said, "Of course I – you're always tempted to go back to these different war zones just for personal reasons. After the war when it ends, which will most likely happen fairly soon, I would definitely like to go back and see the places where I was captured."

"The Shattered Lens: A War Photographer's True Story of Captivity and Survival in Syria," is published by Atria, an imprint of Simon & Schuster, a division of CBS.