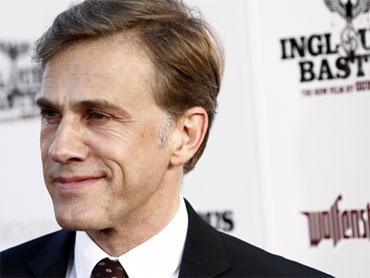 Waltz won the best-actor prize at the Cannes Film Festival and is an early prospect for a supporting-actor nomination at the Academy Awards for the World War II saga "Inglourious Basterds," in which the Austrian-born performer hurtles through Tarantino's rapid-fire dialogue in German, French, English and Italian.

The film takes some jabs at Americans' relative lack of language skills, but Waltz said his own multilingual talents are simply part of life in Europe.

"I've been in places in Europe where you need a different language if you go out for dinner. I worked in southern Germany, and we went into France for dinner. You just go across the river, different language, different culture, different food, different everything. So it's nothing extraordinary," Waltz said, adding that Americans would possess similar language skills if necessity demanded. "If you needed Cherokee to order dinner, you'd speak Cherokee."

Waltz, 52, is a respected TV and stage actor in Germany but a virtual unknown to overseas audiences, with a small role in the James Bond flick "GoldenEye" his only previous credit in a big international production.

Tarantino auditioned top German movie stars for Col. Hans Landa, a brilliant, gleefully cunning Nazi officer who seems to revel in his own voice as much as Samuel L. Jackson's character did in "Pulp Fiction."

The actors he tested obviously could ace the German dialogue, and most could handle the French portions well, Tarantino said.

"Inglourious Basterds" features an ensemble led by Brad Pitt as head of an Allied team of Jews who spread fear and mayhem behind enemy lines by killing and scalping Nazi soldiers.

Waltz's Landa is a roll-with-the-punches Nazi who excels at his job as the Third Reich's foremost "Jew Hunter" but concocts an intricate exit strategy for himself as the tide turns against Germany.

The acting prize at Cannes and the Oscar buzz that followed have come as a pleasant surprise, though what Waltz hopes to get out of his "Inglourious Basterds" experience is a chance to find more acting opportunities beyond TV and theater work back home.

Born in Vienna, Waltz settled on acting at 19, coming from a four-generation family of theater performers and designers. It's a bit ironic that a role as a Nazi should be the one to put Waltz in Hollywood's spotlight: When he was starting out 30 years ago, Waltz made a brief foray to Los Angeles to scout his prospects, meeting with veteran agent Paul Kohner.

Kohner told him, "You will have to ask yourself a question: Do you want to cross through the background for the rest of your life yelling, `Heil Hitler!'" Waltz said. "So I decided there and then, no, thank you, that's not what I intend to do, and went back to where I got the good stuff."