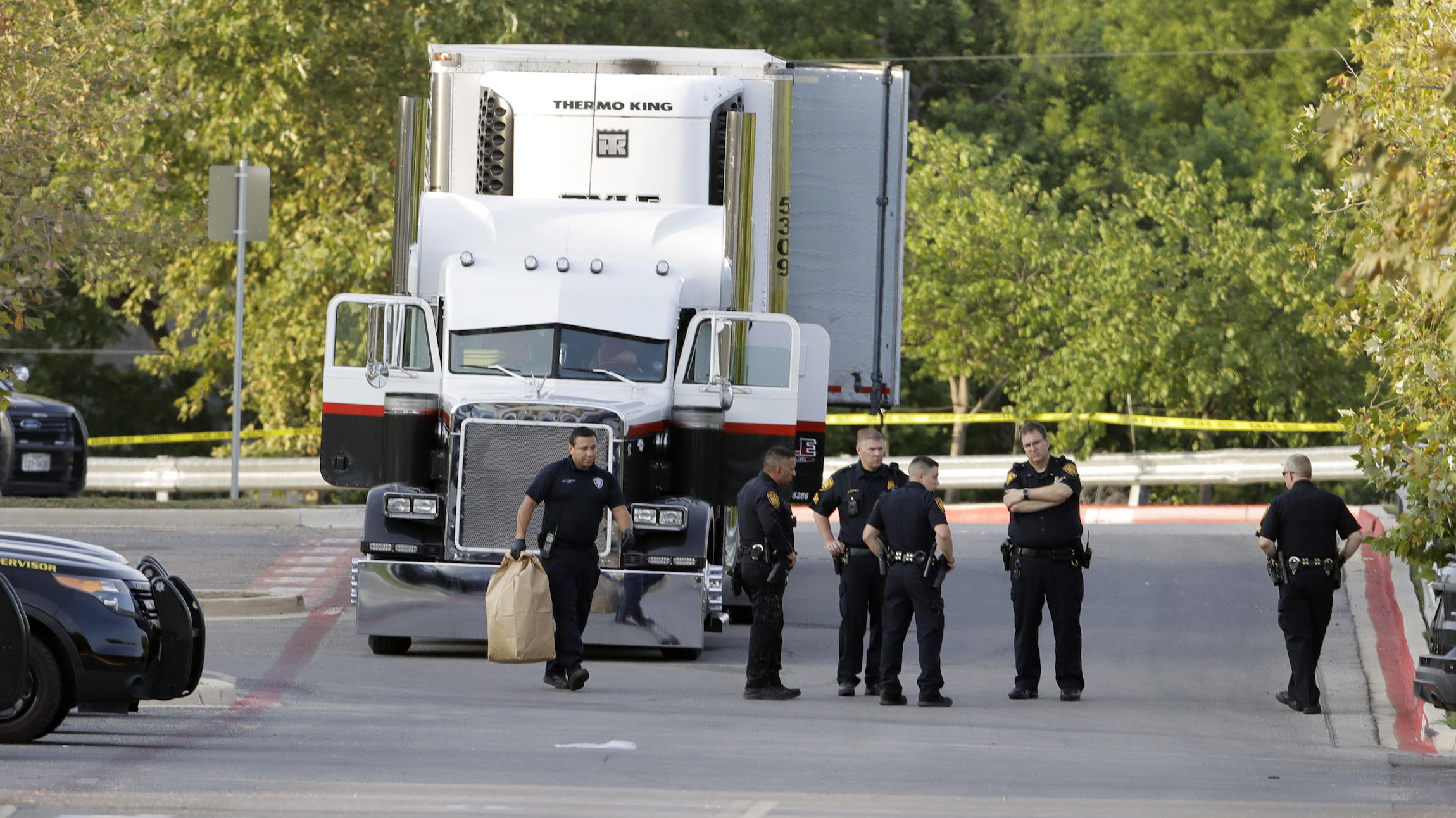 SAN ANTONIO -- At least 9 people died after being crammed into the back of a sweltering tractor-trailer found parked outside a San Antonio Walmart, authorities said Sunday in what they described as an immigrant-smuggling attempt gone wrong.

The driver was arrested, and nearly 20 others rescued from the rig were hospitalized in life-threatening condition -- many with extreme dehydration and heatstroke, officials said.

Authorities were called to the parking lot late Saturday night or early Sunday and found the deceased inside the 18-wheeler. One of the victims died at the hospital, Jennifer Elzea, a U.S. Immigration and Customs Enforcement spokesperson, told CBS News.

The victims "were very hot to the touch. So these people were in this trailer without any signs of any type of water," San Antonio Fire Chief Charles Hood said.

Based on initial interviews with survivors, ICE Acting Director Thomas Homan told The Associated Press there may have been more than 100 people in the truck at one point. Thirty-eight were found inside, and the rest were believed to have fled or been picked up, authorities said.

Some survivors told authorities they were from Mexico, and four appeared to be between 10 and 17 years old, Homan said. Investigators gave no details on where the rig began its journey or where it was headed.

Late Sunday night, a Mexican official says some Mexican nationals were among the survivors and those who died. Mexican Consul General in San Antonio Renya Torres says officials are working to identify the survivors and notify family members.

Torres says the consulate has been in contact with relatives both in Mexico and the U.S.

Tekandi Paniagua, communications director for the foreign ministry, says the two male survivors told Guatemalan consulate officials that they crossed the border by foot at Laredo and boarded the tractor-trailer. They told officials their final destination was Houston.

Homan said it was unlikely the truck was used to carry the immigrants across the border into the U.S. He said people from Latin America who rely on smuggling networks typically cross the border on foot and are then picked up by a driver.

"Even though they have the driver in custody, I can guarantee you there's going to be many more people we're looking for to prosecute," Homan said.

Federal prosecutors said James Mathew Bradley Jr., 60, of Clearwater, Florida, was taken into custody and would be charged on Monday. The local U.S. Attorney's Office wouldn't say whether Bradley was the alleged driver of the truck who was arrested. It was not immediately known whether Bradley had an attorney who could speak on his behalf.

The U.S. Homeland Security Department stepped in to take the lead in the investigation from San Antonio police. Department Secretary John Kelly said the incident demonstrates the brutality of smuggling organizations that "have no regard for human life and seek only profits."

"The Department of Homeland Security and its partners in the U.S., Mexico and Central America will continue to root out these smugglers, bring them to justice and dismantle their networks," read a statement provided to CBS News.

The truck had an Iowa license plate and was registered to Pyle Transportation Inc. of Schaller, Iowa. A company official did not immediately respond to a phone message seeking comment.A person from the truck approached a Walmart employee in a parking lot and asked for water, San Antonio police said. The employee gave the person the water and then called police, and when officers arrived they found the eight people dead in the back of the trailer, police Chief William McManus said.

Firefighters had been called to the scene at about 12:30 a.m. Sunday, CBS San Antonio affiliate KENS-TV reports. Two AirLIFE choppers and at least 29 fire units responded to take care of the victims.

U.S. Immigration and Customs Enforcement agents and San Antonio police were also called to the scene.

"By any standard, the horrific crime uncovered last night ranks as a stark reminder of why human smuggling networks must be pursued, caught and punished," Homan said in a statement.

Investigators checked store surveillance video, which showed vehicles had arrived and picked up other people from the tractor-trailer, police said.

The temperature in San Antonio had been in the 90s just before the victims were found dead. Authorities said the truck didn't have a working air conditioning system despite the blistering summer heat. The National Weather Service said the temperature in San Antonio hit 101 degrees just before 5 p.m. Saturday and didn't dip below 90 degrees until after 10 p.m.

Some of those in the truck ran into the woods, leading to a search, McManus said. Hours after the living and the dead were taken away, a helicopter hovered over the area after daybreak, and investigators were still gathering evidence from the tractor-trailer, which had an Iowa license plate but few other markings.

"Imagine their suffering, trapped in a stifling trailer in 100-plus degree heat. The driver is in custody and will be charged," U.S. Attorney Richard Durbin Jr. said in a statement.

San Antonio Mayor Ron Nirenberg called the incident a tragedy that "came to our doorstep overnight."

"With compassionate hearts, our city prays for the victims and the families who will never see their loved ones again," Nirenberg said in a statement.

Walmart released a brief statement Sunday saying it was doing what it could to help investigators.

It was just the latest smuggling-by-truck attempt to end in tragedy. In one of the deadliest cases on record in the U.S., 19 immigrants locked inside a stifling rig died in Victoria, Texas, in 2003.

In the 2003 case, the immigrants were being taken from South Texas to Houston. Prosecutors said the driver heard them begging and screaming for their lives but refused to free them. The driver was sentenced to nearly 34 years in prison.

The Border Patrol has reported at least four truck seizures this month in and around Laredo, Texas. On July 7, agents found 72 people crammed into a truck with no means of escape, the agency said. They were from Mexico, Ecuador, Guatemala and El Salvador.

Authorities in Mexico have also made a number of such discoveries over the years.

Last December, they found 110 migrants trapped and suffocating inside a truck after it crashed while speeding in the state of Veracruz. Most were from Central America, and 48 were minors. Some were injured in the crash. In October last year, also in Veracruz state, four migrants suffocated in a truck carrying 55 people.

Nearly 100 residents, including activists and church officials, held a vigil Sunday night to mourn the victims. It took place outside the San Fernando cathedral in downtown San Antonio.

They held up handmade signs reading: "Who here is not an immigrant." Another read: "No human is legal." One woman wore a T-shirt reading in Spanish, "My name is Jesus. I don't have papers."

Those gathered held a moment of silence, then gave speeches blaming federal and state authorities who embrace harsh immigration policies for contributing to the deaths.

Jonathan Ryan, executive director of a nonprofit called Raices, said it's "an unfortunate example" of what happens when such policies are enacted. "You can change laws but you cannot stop the movement of displaced people," he said.

A new law approved by the Texas Legislature lets police ask residents about their immigration status during routine interactions like traffic stops. Opponents have sued in federal court to stop it, saying it's a "show your papers" law.