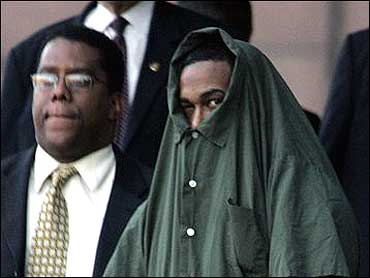 A truck driver was sentenced to life in prison Thursday, avoiding a death sentence for his role in the United States' deadliest human smuggling attempt in which 19 illegal immigrants died from the heat inside a sweltering tractor-trailer.

Tyrone Williams, whose sentencing came on his 36th birthday, according to the Houston Chronicle, was convicted last month on 58 counts of conspiracy, harboring and transporting immigrants.

A jury deliberated for 5½ days before sentencing Williams, himself an immigrant from Jamaica. Williams' life sentence comes with no possibility for parole.

Williams looked down as the verdict was read and gave no visible reaction. His attorney, former U.S. Rep. Craig Washington, wept and wiped his eyes with a tissue.

In May 2003, Williams' tractor-trailer was packed with more than 70 immigrants from Mexico, Central America and the Dominican Republic. As temperatures skyrocketed inside the airtight refrigerator truck, the immigrants kicked walls, clawed at insulation, broke out taillights and screamed for help.

Nineteen of the immigrants died from dehydration, overheating and suffocation during the smuggling attempt from South Texas to Houston. Williams abandoned the trailer at a truck stop near Victoria, Texas, about 100 miles southwest of Houston.

Williams was convicted last month on all 58 counts of conspiracy, harboring and transporting he faced for ferrying the illegal immigrants.

Williams' attorneys argued he never intended for the immigrants to die and did not know they were succumbing to the deadly heat until it was too late. They blamed the deaths on other members of the smuggling ring who overstuffed the trailer.

Williams' family, including his mother and father, begged the jury to spare his life during emotional testimony presented at the retrial's punishment phase.

Prosecutors said Williams earned a death sentence because he intentionally caused the immigrants' deaths by not freeing them when he knew their lives were in danger. They also noted he failed to take life-saving measures, like turning on the trailer's air conditioning, although some survivors testified they thought it had been turned on.

Relatives of the 19 victims also testified, demanding justice and telling jurors their loved ones did not deserve to die the way they did.

Williams, who lived in Schenectady, N.Y., was the only one of 14 people charged in the case who faced the death penalty.

This was the second time Williams was tried for the smuggling deaths.

In 2005, a jury convicted Williams on 38 transporting counts, but he avoided a death sentence because the jury could not agree on his role in the smuggling attempt. The jury deadlocked on the 20 other counts.

The 5th U.S. Circuit Court of Appeals rejected the verdict, saying the jury failed to specify his role in the crime.

Since 1993, prosecutors in the Southern District of Texas have sought only two other death-penalty verdicts and won both times. Both convictions were for murder charges, the Chronicle reports.