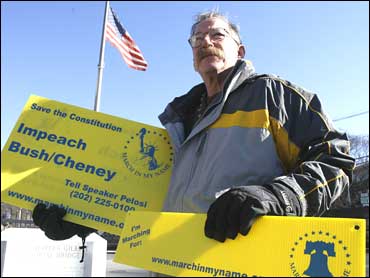 John Nirenberg has waterproof sneakers, a bright yellow poncho and a plan. He also has outrage in his heart and much of his retirement savings tied up in his cause.

The 60-year-old author and academic plans to walk from Boston to Washington, D.C., to confront House Speaker Nancy Pelosi in hopes of persuading Congress to take up the impeachment of President Bush and Vice President Cheney.

Nirenberg says he's no activist. He hates snow, cold and darkness. He's not even sure he'll make a difference, but he's going to try.

He plans to hit the road Sunday, leaving from Faneuil Hall and walking 15 miles a day until he gets to Capitol Hill, stopping at the Statue of Liberty, Independence Hall and other symbolic locations as he makes his way to the U.S. Capitol.

Wearing a "Save the Constitution, Impeach Bush and Cheney," sandwich-board style sign, Nirenberg hopes to rally support for an issue Pelosi has said is no longer on the table.

"This is about satisfying my conscience. I just don't want to be the guy who says in five years that I regret not having stood up and said something.

"With a name like Nirenberg, you're very sensitive to that kind of environment," he said, referring to the post-World War II Nuremberg trials of Nazi war criminals.

Nirenberg, a New York native who was a member of the Civil Air Patrol as youth and later served in the U.S. Air Force, was a social studies teacher, college professor and organizational consultant.

A former dean at the School for International Training, in Brattleboro, he has also written three books.

In October, frustrated by what he sees as constitutional abuses by the Bush administration, Nirenberg decided to "activate my citizenship" and do something about it.

He settled on marching, set up a Web site and made cards, pencils and literature in support of his plan.

He has accepted donations and plans to wear the names of his supporters on yellow 6-by-24-inch panels hanging off his body as he traverses U.S. 1 through eight states and into the District of Columbia, walking six hours a day.

With one supporter riding along in a car and another occasionally walking with him, Nirenberg plans to stop for events with anti-war and impeachment advocates along the way.

Among them is Stuart Hutchison, 49, an actor and producer from Wayne, N.J., who is trying to organize a Statue of Liberty event with Nirenberg while he treks south.

"People like him are the real heroes," said Hutchison, an impeachment activist. "These are the people who are going to save this country."

Nirenberg, who is unaffiliated with any impeachment organization, says people who have heard about his march have been supportive.

"I can't believe what's already happened, and I haven't even started walking," he said Friday. "People are calling me, and they're having a send-off and a bunch of people want to organize a turnout at Faneuil Hall for me. I didn't even pursue this."

He planned to send her a letter before he leaves to let her know he's coming.

Pelosi, through a spokesman, didn't directly comment on Nirenberg's venture.

"The New Direction Congress will continue building a record of progress for the American people - holding the Bush administration accountable, restoring fiscal discipline to Washington and investing in our national priorities," spokesman Nadeam Elshami said.

"If they can rise above strategy and spin and focus on the principles of what America's all about, they will get the overwhelming support of the public in `08, which is what they're really concerned about," Nirenberg said.
By John Curran