The distinctive voice of Dierks Bentley is being heard these days all over the world of country music. Kelly Cobiella travels with the up-and-comer:

"Oh my God it's Dierks Bentley!" screams one young woman.

With a name like Dierks Bentley, was there ever any doubt what this man would do for a living?

"I've heard 'adult film star,' too, that's been mentioned as a possibility for that name!" he said. "But I don't know - I'm happy with the career that I'm in."

The career he's in is country music, and 34-year-old Dierks Bentley is a rising star.

In less than a decade he's had seven Number One singles on the country charts, selling millions of records and earning a reputation as a man who hits the stage … well, like a rock star.

"It's music, but it's also like a sporting event for me," he said on the bus in Dallas. "It's like trying to get a win."

"Where do you think your music falls in the world of country music?" asked Cobiella.

"A lot of stuff's rowdy and fun and up-tempo and reflects the kind of guy that I am," he said. "I'm definitely a regular dude's kind of dude."

And like lots of regular dudes, he grew up out West, in Phoenix.

"And you're like, 'Well, dad likes it, that's pretty cool.' Of course later I thought it was terrible because my dad liked it!" he laughed.

Dierks flirted with rock - his first concert was Bon Jovi - and even went through a Billy Idol phase ...

"I just kept exploring," he said. "I mean, I knew I loved music. But I was just always trying to find what it was that did it for me."

Then one night in high school, he heard country legend Hank Williams Jr. "Right away, I knew I wanted to play country music."

And play it in one place: "I was like, 'I gotta go. I gotta get to Nashville. One way or another I gotta get down there.'"

So he enrolled at Vanderbilt University, and began exploring the capital of country music. But the dude from Arizona found he didn't fit in. 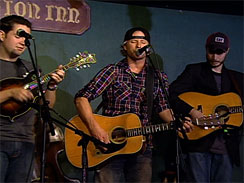 (CBS)
"Everyone's wearin' a cowboy hat, you know, everyone's got on a superstar shirt. So right away I was like, 'OK, that's not gonna work for me, 'cause I can't be what I'm not.'"

What did work for him was the simplicity of the bluegrass music he found at The Station Inn, where he still likes to drop in on a set (left).

By day he got a different education, working in the video library of The Nashville Network, then a cable channel, looking at the greats . . . and dreaming big.

His Plan A happened sooner than he ever imagined. Bentley landed a recording contract, and his first single, "What Was I Thinkin'," made it to Number One on the country charts.

Soon he was making hits - more mainstream than bluegrass - and traveling the road to stardom.

"All I've ever wanted is just to be on a stage somewhere, playing music and really just be on a bus," he said in New York.

He certainly found the right profession for THAT. "First couple of years, we'd play over 300 shows a year," he said. "The road would be a nightmare if you didn't love playing music, my gosh!"

That's no problem for Dierks. You'll find him strumming before, during, and after the show.

"I just love playing. I love singing. I like the sound of my own of my own voice. I'm not afraid to admit that!"

And his fans aren't afraid to show him some love - especially the ladies. When Cobiella suggested he was "sort of a flirt out there" on stage, he laughed. "You'd call that flirting. I'd call it connecting with the audience." 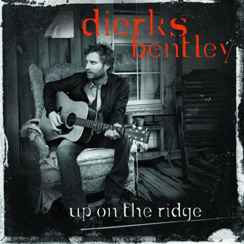 (CBS)
His deepest connection, though, is back in Nashville with his wife Cassidy and their daughter Evie. Dierks has known Cassidy since middle school, but they only got serious a few years ago.

"It's an amazing story, our relationship and where it started," he said. "What we have is a great marriage and a great love."

It's that foundation that's echoed in his latest album, "Up on the Ridge," out last week - a return to the fiddles and mandolins of the bluegrass music he loves.

"For me personally, this album's more of just me going back to, you know, my roots in Nashville. It's me going back and reclaiming some of the ground I think is mine."

Dierks Bentley . . . following a country road, wherever it leads him.