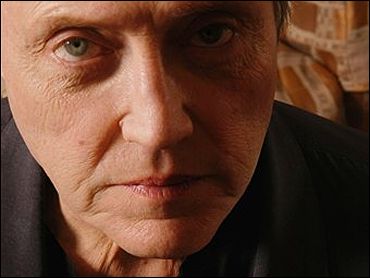 In "The Stepford Wives," Christopher Walken plays the town's foremost upstanding citizen — a leader among men (who have turned their wives into fawning slaves).

"I was kind of the mayor of Stepford," he says, smiling.

There's a touch of evil in his character, like so many of Walken's roles. But, gradually, we're starting to see his on-screen characters go from loony to more lovable.

"Actors are fortunate if people want them, for whatever reason," Walken told The Associated Press during a recent interview.

So it's not like he wants to distant himself from the dodgy men he's played in the past. Still, it's happening.

"As I get older, I'm starting to play people's uncles and fathers. For a long time, I never did that," the 61-year-old actor notes.

For a long time, he's played someone damaged, dangerous, deranged.

But think about this: he got his first Oscar nomination (and won) for his performance as a traumatized Vietnam vet who becomes a Russian roulette professional in 1978's "The Deer Hunter"; the second came for playing the sweet, sad father of Leonardo DiCaprio in 2002's "Catch Me If You Can."

"As an actor you try to have a long career, and to stay viable. You try to keep the audience interested," Walken says.

And he likes to work as much as possible. "The Stepford Wives" is already his third movie this year ("Man on Fire" and "Envy" are the others) with two more to follow.

"I'm not a big one for opting to wait it out at home for a while for that juicy part. I more or less just try to keep going," Walken says. "And I don't have a lot of things to do otherwise. I don't have hobbies. I don't have children. I have my wife, but she works also." (Georgianne Walken has been casting director for "The Sopranos" as well as scores of movies and TV shows over the years.)

So he's even done music videos, including that wonderful star turn dancing throughout Fatboy Slim's "Weapon of Choice."

In the music world, too, he's now immortalized in the Fountains of Wayne song "Hackensack" — which he enjoys. "And for that matter, if I see somebody on television do an imitation of me, of course, it's great," says Walken, who's been imitated famously by Jay Mohr and Kevin Spacey and not so famously by others.

"I have a friend who does me on his answering machine, so that when I call him it's me picking up the phone on the other side."

Walken's new agents were recently quoted as saying that they want him to be more selective about roles. But he just laughs when that's brought up, even though he thinks they're right.

He's certainly been in some clunkers, going back to the infamous flop "Heaven's Gate" (1981) and 1983's "Brainstorm." More recently his credits include films that many critics consider execrable: "Joe Dirt," "Kangaroo Jack" and "Gigli."

"It doesn't occur to me that something might not be a good idea," he says, chortling again. "I'd just as soon forge ahead."

Walken has been moving forward in show business since he was 3. He was raised in the Astoria section of Queens by his German baker father and Scottish mother who pushed her three boys into show business.

He worked as an extra in the early days of live television, and became an accomplished song-and-dance man long before his first big splash in the movies, as the brother of "Annie Hall" who fantasizes about suicidally driving his car into a head-on collision

After his Oscar-winning performance in "The Deer Hunter," in which he shot himself in the head, his most memorable turns include throwing Michelle Pfeiffer out of a high-rise window in "Batman Returns"; discussing the genetic influence of Africa on Sicilians with Dennis Hopper before shooting him in the head in "True Romance"; and telling a little boy how his father saved a family heirloom in "Pulp Fiction" in a soliloquy that ends up being hilarious.

Walken can play silly as well as scary, and his comedic skills recurringly have been used on TV's "Saturday Night Live." (During a skit on the NBC show last year, he played Col. Angus, a confederate officer whose name, repeatedly spoken with a Southern accent, sounds like a sex act.)

He's wary, however, of doing much television because the audience is so huge, much more than movies and certainly much more than the theater. "There's just enormous millions of people who see you ... and then they rerun it," he says. "It's very difficult to keep a long career on television."

People have approached him about a cooking show, since he's a bit of a kitchen magician. But he won't be wearing a chef's hat on TV anytime soon. It's tempting but it's more tempting to have a career as an actor, he says.

Besides Walken's crazy quilt of cadences when he speaks — along with that thousand-yard stare — another trademark is incorporating a little dance into his movies. (There's a big waltz scene in a big ballroom in "The Stepford Wives.")

It's a little like Hitchcock showing up briefly in his movies, Walken says, except in his case people are saying: "Oh, there's Chris, he's doing his thing."

His dance background also affects his approach to dialogue — and more. "It affects everything. It affects the way I pick something up," he says. "While you're a dancer, there's a sense of if it feels right, it is right."

In his 36th year of marriage, Walken says young actors ask him more about the secret to that longevity than about acting.

"You have to be lucky," he offers, adding: "There are some people who like to be married."

And he's one of them. It helps that his wife does certain things much better than him, and vice versa, meaning that for them: "One and one is more than two."

Another explanation is that, quite the opposite of people he's played over the years, he's easygoing, and so is his wife.

Finally, he's "conservative" in his life.