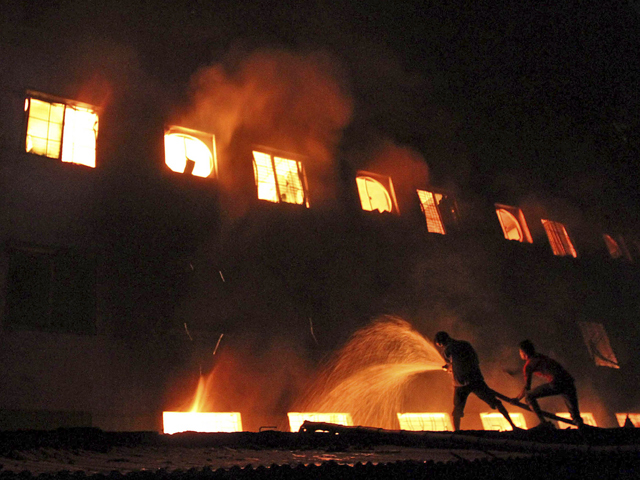 DHAKA, Bangladesh The garment factory in Bangladesh where a weekend fire killed at least 112 people had been making clothes for Wal-Mart without the giant U.S. retailer's knowledge, Wal-Mart said.

Wal-Mart said the Tazreen Fashions Ltd. factory was no longer authorized to produce merchandise for Wal-Mart but that a supplier subcontracted work to it "in direct violation of our policies."

"Today, we have terminated the relationship with that supplier," America's biggest retailer said in a statement Monday. "The fact that this occurred is extremely troubling to us, and we will continue to work across the apparel industry to improve fire safety education and training in Bangladesh."

The blaze on Saturday was one of the deadliest fires at a garment factory in Bangladesh and highlighted how the country's garment factories often ignore safety in the rush to supply major retailers in the U.S. and Europe. More than 300 people have died over the past six years in garment factory fires in the South Asian country.

Survivors of the weekend fire said an exit door was locked, fire extinguishers didn't work and apparently were there just to impress inspectors, and that when the fire alarm went off, bosses told workers to return to their sewing machines. Victims were trapped or jumped to their deaths from the eight-story building, which had no emergency exits.

On Tuesday, the Bangladesh national flag flew at half-mast in all government buildings as the nation mourned the dead. The country's garment factories also closed as the government announced a day of national mourning to honor those killed in the fire.

Prayers were being offered at places of worship across the country, the government said.

On Monday, about 15,000 Bangladeshi workers protested blocks from the gutted building in the Dhaka suburb of Savar, demanding justice for the victims and improved safety. Some 200 factories were closed for the day after the protest erupted. Demonstrators blocked a major highway, threw stones at factories and smashed vehicles.

"The owners go unpunished and so they don't care about installing enough security facilities," she said. "The owners should be held responsible and sent to jail."

Wal-Mart did not say why it dropped the Tazreen factory. But in its 2012 Global Responsibility report, Wal-Mart said it stopped working with 49 factories in Bangladesh in 2011 because of fire safety issues. And online records appear to indicate the Tazreen factory was given a "high risk" safety rating after an inspection in May 2011 and a "medium risk" rating in August 2011.

For more than a day after the fire, Wal-Mart said it could not confirm whether it was still doing business with Tazreen, which was making T-shirts and polo shirts. The uncertainty illustrated how major retailers in the U.S. and Europe rely on a highly complex chain of foreign manufacturers and middlemen to keep their shelves stocked.

Tazreen Fashions is a subsidiary of the Tuba Group, a major Bangladeshi garment exporter whose clients include Wal-Mart, Carrefour and IKEA, according to its website. Its factories supply garments to the U.S., Germany, France, Italy and the Netherlands, among other countries. The Tazreen factory opened in 2009 and employed about 1,700 people.

Neither Tazreen nor Tuba Group officials could be reached for comment.

But the Bangladesh Garment Manufacturers and Exporters Association urged investigators not to rule out sabotage.

Police said Tuesday they were questioning a woman who allegedly tried to set fire to another factory in the area on Sunday, a day after the Tazreen factory blaze.

Local police chief Habibur Rahman said the woman claimed she was given money by a man to set the fire.

"We have also arrested the man," said Rahman. "We are trying to find if the two have any links to the Tazreen factory fire."

Government investigator Mainuddin Sarkar said they are not ruling out sabotage.

"We are looking into all possibilities, including sabotage," Sarkar said after a visit to the burned factory.

Mahbub said it was the lack of safety measures in the building that made the blaze so deadly. "Had there been at least one emergency exit through outside the factory, the casualties would have been much lower," he said.

He said firefighters recovered at least 100 bodies from the factory and 12 more people died at hospitals after jumping from the building. Local media reported that about 100 injured people were being treated at hospitals.

The government was unable to identify many victims because they were burned beyond recognition; they were buried Monday in a grave outside Dhaka.

Mohammad Ripu said he tried to run out of the building when the fire alarm rang but was stopped.

"Managers told us, 'Nothing happened. The fire alarm had just gone out of order. Go back to work,'" Ripu said. "But we quickly understood that there was a fire. As we again ran for the exit point we found it locked from outside, and it was too late."

Ripu said he jumped from a second-floor window and suffered minor injuries.

Another worker, Yeamin, who uses only one name, said fire extinguishers in the factory didn't work, and "were meant just to impress the buyers or authority."

Bangladesh has some 4,000 garment factories. The country earns about $20 billion a year from exports of garments, mainly to the U.S. and Europe.

The Bangladesh Garment Manufacturers and Exporters Association said it would stand by the victims' families and offered $1,250 to each of the families of the dead.