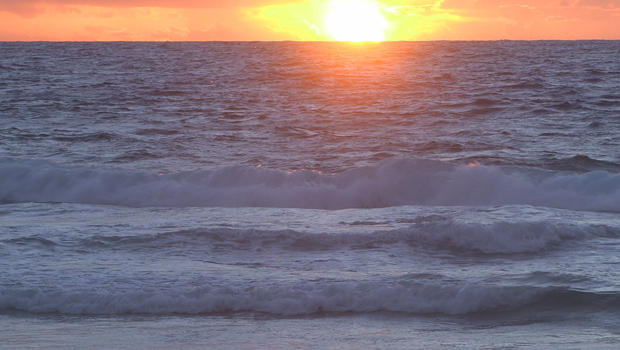 In the months to come our Conor Knighton is doing some "Island Hopping." First stop: a tiny speck in the Pacific Ocean...

The dawn's earliest light -- the first rays of sun on U.S. soil – shine upon Wake Island.

Every morning America wakes up on Wake Island.

Guam claims to be where "America's Day Begins," but that's not technically true. Fifteen-hundred miles further east, right next to the International Date Line, there's a tiny speck of land -- a military base, where the sign on the airstrip once read "Where America's Day REALLY begins."

There just aren't many Americans out here full-time who get to see it.

"Well, permanently, there's only four of us," said Captain Allen Jaime, who spent the past year as the commander of Detachment 1 -- four Airmen out in the middle of the ocean.

Knighton asked, "You are on American soil. Does it feel like that?"

"Well, no. It feels like we are our own little country, is really what it feels like," Airman Mark Harrison replied.

Wake is an atoll -- three small islands -- annexed by the U.S. in 1899 after the Navy decided they might have strategic significance. Before that, the place was thought to be, well, for the birds.

Hundreds of thousands of them.

"This place, well, it belongs to the birds," said researcher John Gilardi. "For millions of years, that's all that was here."

The atoll is a National Wildlife Refuge. Gilardi periodically comes to Wake to study the migratory seabirds, like the sooty terns, that stop here on their journey across the ocean.

As soon as humans took to the skies, we started using Wake in the exact same way. It was, and IS, an important refueling spot for aircraft heading out across the Pacific. Wake Island may be the world's most scenic gas station.

"Ultimately it's a government installation, and it's used for operational purposes," said Captain Jaime. "It's not a vacation spot, you know."

"If you're a civilian and you want to come …?" asked Knighton, a civilian.

That wasn't always the case. Pan Am passengers used to explore Wake on luxurious layovers.

Pan Am built a hotel here in 1935, and tourists would fish and snorkel in the pristine waters. But Wake wasn't a paradise for long. In 1941, on the same day that Japanese forces bombed Pearl Harbor, they also attacked Wake Island.

Except, on the other side of the date line, it was actually December 8.

For two weeks, a group of brave Marines and civilian contractors held off the Japanese. The Oscar-nominated 1942 film "Wake Island" depicts the battle, in which far greater casualties were suffered by the Japanese. Eventually, though, the American fighters were overwhelmed.

Most were shipped off to interment camps in Asia. But not all.

"Ninety-eight POWs were kept, and they just did hard labor for the Japanese," said Captain Jaime.

"98 Rock" is a hastily-carved memorial to those men.  After a year-and-a-half, the prisoners were executed by the Japanese -- but not before one managed to swim across the lagoon and scratch out the date that he and 97 other civilians were massacred.

Today, civilian contractors still play a large role on Wake. On any given day, there may be 100 or so people here, working to maintain roads and runways.

Every two weeks, a flight from Honolulu makes the six-hour journey to deliver new supplies and personnel.

"The first day after that airplane arrives usually is the day people are looking forward to, 'cause it's the fresh food," said Captain Jaime.

In the dining hall, you'll notice Thai dishes on the menu. Over half of the workforce is Thai; some have lived out here for decades, like Saw Weng Sak, an "old timer" who's been on Wake since January 1991.

Knighton visited Wake on the last night of Captain Jaime's deployment. Like most nights, the entire island was hanging out at Drifter's Reef -- Wake's only bar.

"I can't say enough about how great this experience has been," Captain Jaime said. "It's been a highlight in my life, for sure."

When the sun sets on Wake Island, it hasn't even come up yet in New York. For the rest of America, Wake Island lies firmly in the future. But for the few who have lived and worked here, the island is a constant reminder of the past.