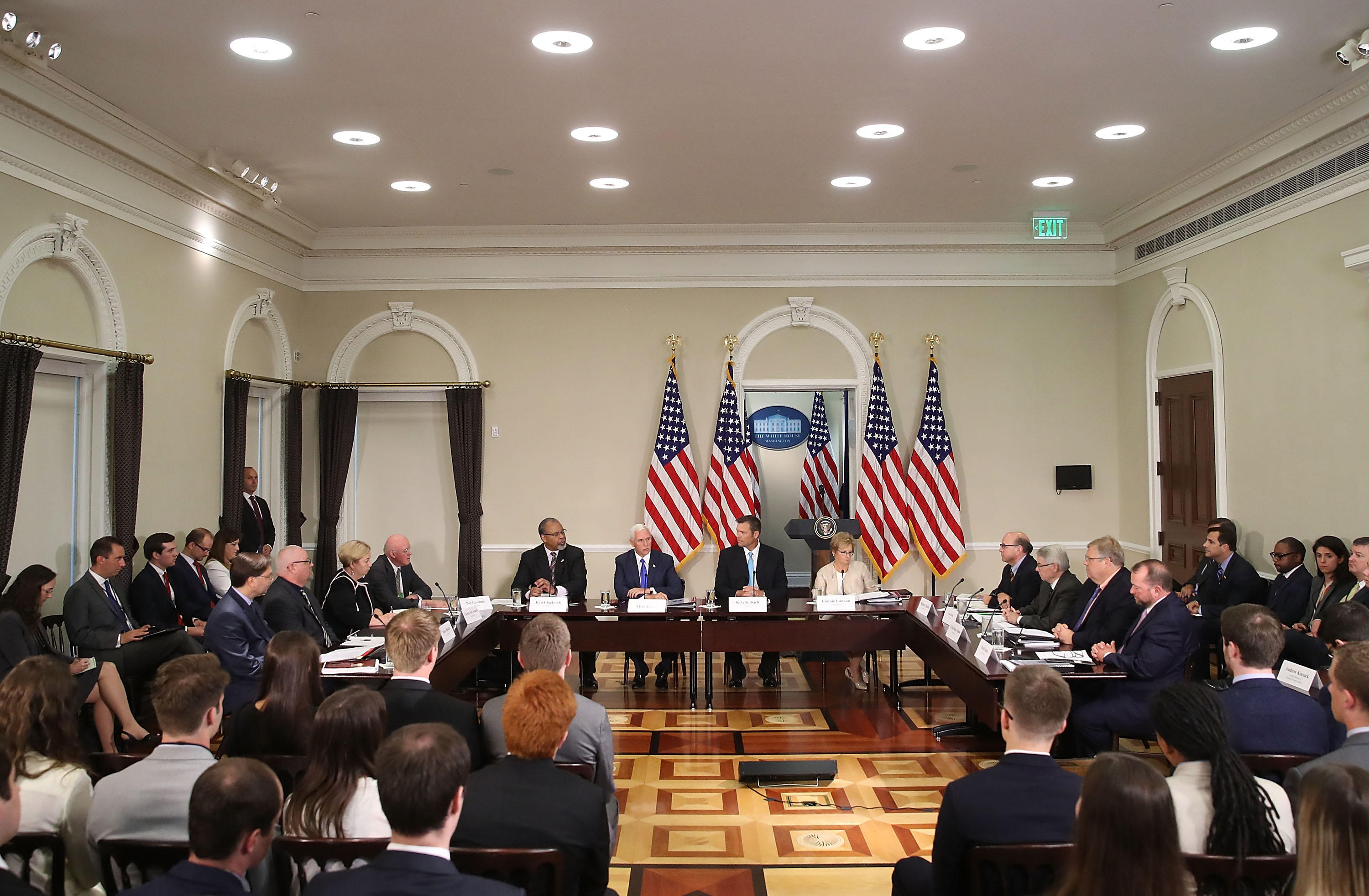 The vice chairman of President Donald Trump's commission on election fraud on Tuesday dismissed criticism that the panel is bent on voter suppression, saying there is a "high possibility" it will make no recommendations when it finishes its work — and even if it does, it can't force states to adopt them.

Trump, a Republican, created the Presidential Advisory Commission on Election Integrity in May to investigate his unsubstantiated claims that millions of people voted illegally in 2016. Democrats have blasted the commission as a biased panel determined to curtail voting rights, and they ramped up their criticism ahead of and during the group's daylong meeting in New Hampshire.

California Secretary of State Alex Padilla, a Democrat, said some voters have canceled their registrations or been hesitant to register since learning the group has asked state governments to provide data on individual voters.

"Their voting suppression impact has already begun," he said on a press call organized by the Democratic National Committee.

The commission in June requested any records considered public by states, including driver's license numbers, partial Social Security numbers and voting histories. No state is sending all of the information sought, and 14 states are denying the commission's request.

There was no mention of the data request during the commission's meeting, which included presentations about historical election turnout data, electronic voting systems and issues affecting public confidence in elections. But speaking to reporters afterward, commission vice chairman Kris Kobach emphasized that states are only being asked to send already-public information and called the Democrats' criticism about voter suppression "bizarre."

"The claim goes something like this: The commission will meet, then they'll recommend things like photo ID or some other election security measure, then the states will adopt them. There's your leap in logic. The commission does not have the ability to do a Jedi mind trick on a state legislature and force them to adopt anything," said Kobach, the Republican secretary of state in Kansas.

Privacy advocates have raised concerns about the information being collected in one central place, although the commission has said the detailed data will not be made public and will be destroyed when the commission is done with it.

Kobach said 20 states have sent data so far. He said the commission hopes to use it to investigate possible cases of people voting in multiple states but said that will depend on how much information it receives.

"It may be that the commission is not able to say we were able to look at all 50 states and here is the size of this particular problem," he said.

Kobach last week wrote a column for the conservative site Breitbart claiming statistics on thousands of people who used out-of-state licenses to register to vote in New Hampshire amounted to proof that people enter the state from elsewhere specifically to cast fraudulent votes. Kobach had said "it appears" that's why Democrat Maggie Hassan won her U.S. Senate seat in November.

"I'm still wondering if that was the right word to use," he said Tuesday, acknowledging that New Hampshire allows college students, military personnel and others to vote in the state without becoming residents and getting driver's licenses if they consider the state their domicile.

"Until further research is done ... we will never know the answer regarding the legitimacy of that particular election," Kobach said.

Gardner, who has resisted calls for him to leave the commission over Kobach's comments, said the Senate race results were "real and valid" and reminded Kobach to stay on task.

"In the first couple of meetings we had, the chairman of the commission made it very clear to me ... we work in a way that we don't have preconceived or preordained ideas about what the facts are going to be," he said. "We're going to search for the truth. That is something we need to all stay focused on."

"There's utterly no connectivity between motor vehicle law and election law. Primarily, you have a right to vote. Driving is a privilege," he said. "Making this equation that somehow people not updating their driver's licenses is indicative of voter fraud would be almost as absurd as saying if you have cash in your wallet that's proof that you robbed a bank."