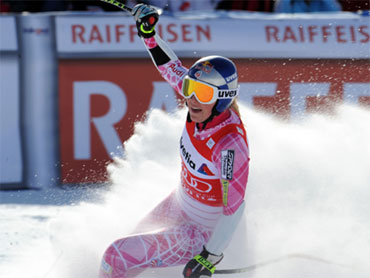 Lindsey Vonn is worried a badly bruised right shin will keep her out of the Vancouver Olympics.

The American revealed Wednesday that she was injured in a slalom training run Feb. 2 during pre-Olympic practice in Austria. It was her first trip down the slopes of what was supposed to be three days of practice.

"I'm sitting here today questioning whether, you know, I'll be even able to ski," Vonn said. "I have to play it by ear."

It was a startling announcement so close to the start of a Winter Games that has been shaping up as a showcase for Vonn. As a two-time reigning overall World Cup champion, the 25-year-old Vonn has been considered a contender to win multiple medals.

Asked whether she could be forced to sit out altogether, Vonn replied: "Yeah, that's a possibility."

She hasn't skied since getting hurt and said it's even been painful to simply put on a pair of ski boots in her hotel room to test the leg. Vonn said the bruising is on her lower right leg - starting from where the top of a boot rests against her body - but she refused to get any X-rays to check whether she broke a bone because she didn't want to know.

"It's probably the worst place that you can have an injury, because you're constantly pushing against your boot, and there's no way around it," Vonn said.

She described her mindset as "very emotional, very scared. Not the positive way you want to be starting the Olympics."

The first women's Alpine race is the super-combined on Sunday. Vonn said she figures she will know a lot more about her status for the Olympics once she takes a run down the slope in Whistler. The first official training run for women is Thursday.

Vonn is slated to compete in all five women's Alpine events and has been widely seen as the favorite to win gold medals in the speed events: downhill and super-G.

She is no stranger to injuries - or to ignoring them on the slopes.

At the 2006 Turin Olympics, she took a harrowing spill in downhill training, a fall that bruised her back and sent her to the hospital. Less than 48 hours later, Vonn - then unmarried and known as Lindsey Kildow - was back in the starting gate and finished eighth in the downhill.

This season, in late December, she lost control during a World Cup giant slalom in Austria, hit the ground and worried she had broken her left wrist. It turned out it was a bad bruise, but Vonn was right back out there racing in a slalom the next morning, wearing a brace to protect the tender arm. Less than two weeks later, she was stringing together a three-race winning streak.

Earlier that month, Vonn's knee slammed into her chin as she sped down a downhill in Lake Louise, Alberta, making her teeth chomp on her tongue, causing blood to pour out of a corner of her mouth as she crossed the finish line.

"I've dealt with a lot of injuries in the past, and I've always been able to persevere," Vonn said. "I hope I'm able to push through the pain and I'm able to still ski OK. I won't really know until tomorrow, when I actually get on skis, and they can actually assess the situation and see how bad it is."