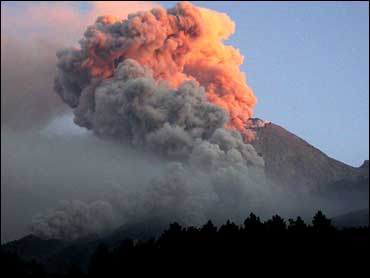 Large eruptions of searing hot gas and debris led to the hasty evacuation of thousands of villagers from Mount Merapi's slopes Wednesday — a day after they got the OK to go home — as authorities raised the volcano's alert level to its highest status again.

"The situation is quite serious as it is life-threatening," said Yousana Siagian, head of the government's Vulcanology and Disaster Mitigation Center.

A gas cloud nearly enveloped one village, and ash covered another village 4.5 miles from the crater with a gray blanket an inch thick, officials said. Up to 20,000 people live in the mandatory evacuation zone.

Siagian said Merapi spewed hot clouds as far as four miles from the volcano's crater — the farthest since the alert status was first raised to the highest level on May 13.

The alert level was dropped a notch on Tuesday, sparking widespread relief for people who have spent weeks in evacuation camps. That relief quickly turned to concern Wednesday.

"We were very happy to go back in the morning but as soon as we got there we saw a massive cloud steaming toward us," Egan said after being trucked back to the camp. "We all decided it was time to leave."

Mount Merapi, one of Indonesia's most dangerous and unpredictable volcanoes, has been venting massive clouds of hot gas and debris and sending lava flows streaming down its slopes for more than a month.

Activity had slowed in recent days, allowing villagers to return home. They were told to stay alert, and evacuation trucks remained on standby in each village.

"When we downgraded the status, we said that if its activities increased and we thought it was dangerous to the people, then we will review it," government scientist Subandrio told el-Shinta radio station when he announced the alert status had been raised again.

Sugiono, an official from a monitoring post at Srumbung village, said the western side of Merapi was blanketed by volcanic debris.

"A heavy rain of ash and sand poured down on villagers," Sugiono said. "It's very dark and covered by smoke and ash. People instinctively came to the shelters."

Some 12,000 people in seven villages in the Magelang district, on the mountain's west side, were ordered to leave, said district official Edy Susanto. Some were awaiting trucks to take them to shelters as dusk fell.

"The villagers are confused. They said it was safe, but hot clouds re-emerged. One thing for sure, we have readied ourselves to evacuate anytime," said Budiono, the chief of Ngargosoko, a village some 6 miles from the peak that was ordered evacuated.

Despite the danger, many people have stayed put over the last month, citing the need to look after homes, crops and animals.

The main dangers at the 9,700-foot Merapi are fast-moving bursts of blistering gases and rock fragments called pyroclastic flow.