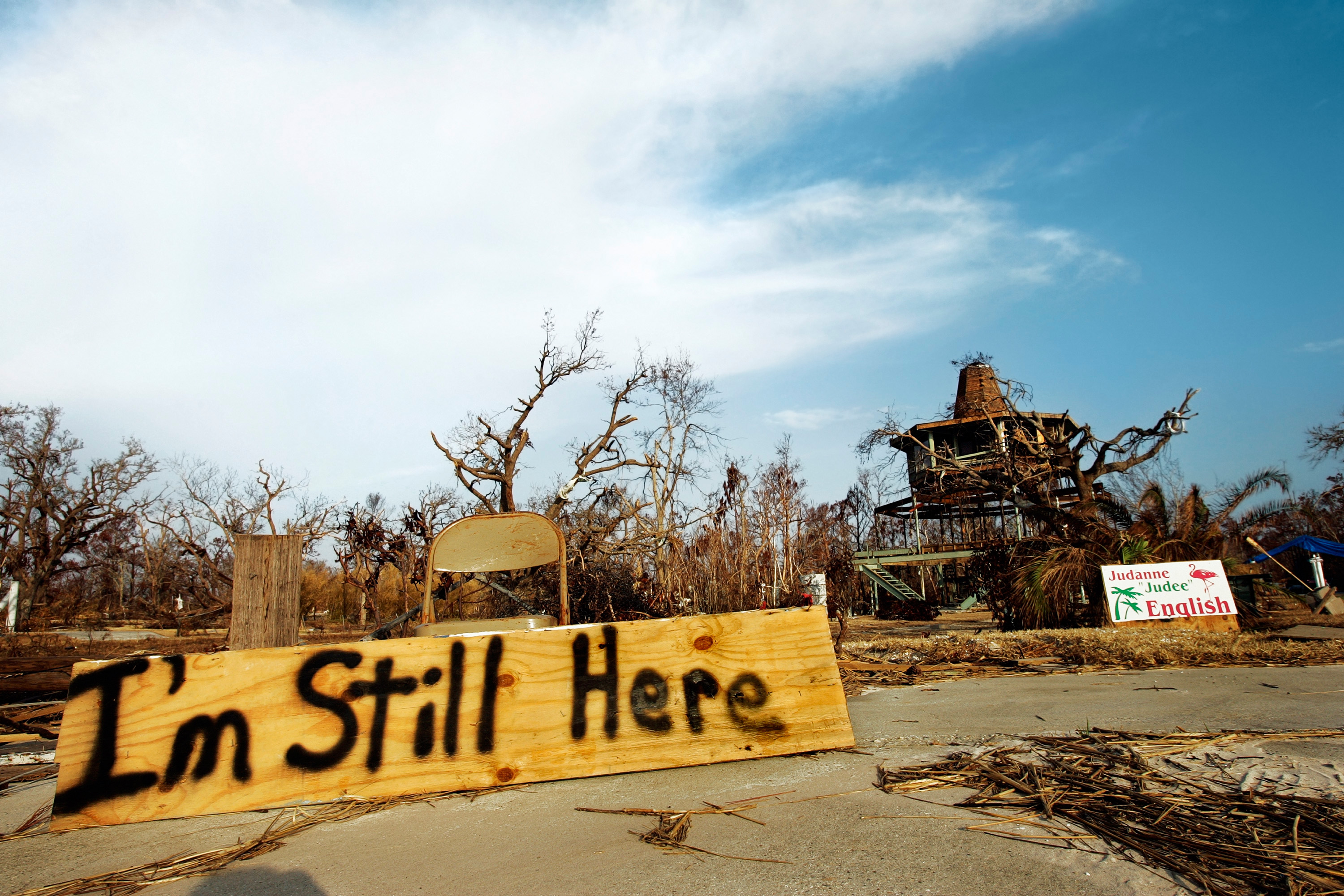 Hurricane Katrina forced countless residents to flee their homes in the Gulf Coast, but many left their mark with makeshift messages scrawled on their storm-ravaged properties. Ten years later, CBS News caught up with many of these residents and discovered some ultimately stayed in the region, while others never returned. These are their stories.

When a hurricane devastates an area, the story doesn't end when the flood waters recede. There is the burden of rebuilding; the question of whether it is even possible to rebuild; and the painful taking stock of what has been lost. Ten years later, that is very much the case for three locations ravaged by Hurricane Katrina -- southeast Louisiana, New Orleans and the Mississippi coast -- where the effects of the storm are still clear.

Katrina first made landfall along the Gulf Coast in Plaquemines Parish, Louisiana. Larry Hooper, a charter fisherman there, describes the extent of the damage:

"When I got to my property, I had to look hard to see exactly where my property was. ... Everything was in the trees and my backyard backed up," he says. "I had roofs of houses, parts of houses in my back property. My boat that was on my property, I found three-quarters of a mile away."

Hooper and his wife chose to stay in the area after the storm, but their neighborhood restaurants, grocery stores, and natural gas lines never returned. Neither, Hooper notes, did most of their friends.

Coastal Mississippi -- often referred to as ground zero for Hurricane Katrina -- shared the eye of the storm with Plaquemines Parish.

"For the first three to four blocks off of the beach, we looked like Hiroshima. There was nothing," says Roger Caplinger, who grew in the area and still lives there today. "We were takin' track hoes and helpin' the coroner get, you know, debris out of the way so that the cadaver dogs could get down to the bodies."

Before Katrina and the carnage it brought, Waveland, Mississippi was a beach city with a small-town feel.

"You could hear the waves from my porch, and I thought that was just the best thing in the world," reminisces Chanel Alaniz, who left after Katrina and never moved back. "It was incredible to be there. You know, everybody knew everybody somewhat. There were great places to hang out. We had some great beach bars."

One such beach bar, called "Daydreams" on the ground level and "The Good Life" on the second floor, was such an icon in nearby Bay St. Louis that locals went around collecting fragments of its interior and old pieces of its signs after the storm. They then propped those pieces up on pylons near the beach, creating an ad hoc beacon of the familiar in a place where so many residents had lost their homes.

"Literally people would go and party there," says Caplinger. "We'd all be playin' music. And this was when there was no power, there was nothin' goin' on. There were curfews and all kinds of stuff, so you had to be kinda careful. ... But that's just how much everybody loved that spot. There was just so many different people that felt like that was home."

Caplinger is now one of the owners of Buoys Bar, a new hub for the community that's been built on the site where the two beloved bars once stood.

Ten years after Katrina, structures along the Mississippi coast are gradually being rebuilt and the area revitalized. For some residents, however, the emotional scars are harder to recover from.

Like so many others, Alaniz found it too painful to return to the community she loved after the storm. She opted to move into a Habitat for Humanity house in Oklahoma instead of a FEMA trailer back home. Similar to Larry Hooper in southeast Louisiana, she noted that the community in Waveland, as she remembered it at least, never really returned, leaving her with a form of homesickness that lingered for years.

View photos of the Mississippi coast

"I yearned to go back to a place that didn't exist," she says. "It's definitely something that will last forever. When you lose so much at one time, it changes you very much. You can go through the storm, but when you come out of it, you're a completely different person."

That is a sentiment echoed by Katrina survivors throughout the Gulf Coast. In the city of New Orleans, for example, where the overall experience was very different from that of a small southern beach town, the residents are like those of Waveland in that they suffered unspeakable losses as a result of the storm.

Robert Green of New Orleans' Lower Ninth Ward lost his ailing 73-year-old mother as his family waited for rescue on the roof of a house. Adding to the tragedy, his three-year-old granddaughter was washed off the roof, as well.

"Put her on the roof of the house, turned around to grab her two sisters and she was gone, disappeared," he recalls. "And all I could do was start screamin', 'Jesus, Jesus,' grab my composure 'cause we had two more."

Green's granddaughter was one of hundreds of New Orleans residents to be washed away and ultimately drown in the flood waters. Musician John Pastor, who's lived in the city for 26 years and stayed through Katrina, waded past many of them in his attempt to leave the city a week later.

"We were goin' through the water, I was seein' bodies floatin' and I was pushin' my way," he recalls. "I got a big stick and just kinda push 'em away, where we didn't have to go that close to 'em."

Pastor recalls days and days of flooding and looting, but he feels the neighborhood is finally bouncing back.

"St. Roch Market down the street was literally opened up this past January. It was closed for 10 years. And literally, the day of the hurricane, I seen it. There was three feet of water inside the place," he says. "Now it's opened up again, but it's not the same."

New Orleans' recent gentrification has fueled the city's revitalization but also locals' grievances with the way Katrina was handled there. Many people who moved into the area and bought up the abandoned lots and foreclosed houses are not the people who made up the community before. And with their new structures and businesses have come higher rents that box some of the neighborhood's original residents out.

"Some people say it's gentrification," says Artis Turner, a New Orleans local who now owns the Dirty Dishes food booth inside St. Roch Market. "To a certain degree, I kind of agree with that. But, you know, my personal opinion is it's progress and change. ... If you keep living long enough, you'll see anything eventually turn into something else."

"I see this building as a center, not of gentrification, but a center of hope," said his wife and business partner, Lesley Turner. "Because if you know where we've come from as a city within the last 10 years, you know that it has been a slow process of evolution. ... We've come so far."

Lesley points to the types of jobs that are now available in the area and the improved schools as examples of that evolution. She believes that in the long term this new focus on education will help reduce New Orleans' soaring crime rate, as will the fact that the city's population is growing once again.

"Some [people] came back and redid things and then a lot of 'em didn't," notes John Pastor. "I still talk to people that are all over the country that have not even made it back yet. That or, you know, wantin' to come back, but just can't, or can't afford it."

And sadly, that problem is not unique to New Orleans. Due to rising insurance rates, new building regulations and a smattering of other factors, Judee English hasn't been able to rebuild her home in Waveland, Mississippi either.

"I wanna rebuild. I haven't been able to let go of the beach property because that was always my dream to live on the beach. And I finally did," she says. "At least I had it for 25 years. That's the way I look at it. You just have to think positive about it and remember the times that you did have there. ... Mother Nature can't take that away from you."