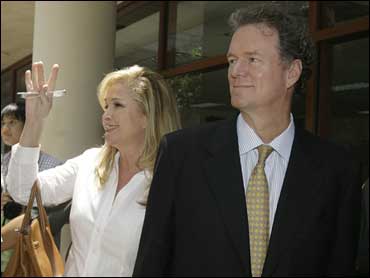 Paris Hilton's parents visited their daughter after breezing past others waiting to see loved ones — an incident that raised new complaints that the heiress is receiving special treatment.

The visit came less than a week after Hilton was reassigned to house arrest days after being jailed for violating parole. The 26-year-old celebrity was later ordered back to jail.

Like all prisoners, Hilton was allowed a half-hour visit with two guests this time: her parents. CBS News' Teri Okita reports that Hilton's mom and dad say their daughter is "very scared" and hasn't slept well.

"She just wants to just do her time and get on," Kathy Hilton said.

This was the first time the Hiltons saw their daughter since hugging her goodbye and sitting in court last Friday.

To avoid another big spectacle, the Hiltons arrived when the visitors center closed for lunch and were escorted by sheriff's deputies.

"We went out and just helped a mother and father who wanted to visit an inmate get out of their car because they were surrounded by aggressive camera people and reporters," said L.A. Sheriff Dept. spokesman Steve Whitmore.

Alvina Floyd, one visitor to the Twin Towers Correctional Facility, waited more than four hours to visit her fiancé. It normally takes two hours, and Floyd, 20, blamed the Hiltons for the delay.

Shatani Alverson, 23, said she was hustled out of the jail's visiting room moments after her husband walked in because of the Hiltons. She was told to come back after lunch.

The Hiltons visit came shortly after the Los Angeles County Board of Supervisors ordered Sheriff Lee Baca to respond by next week to allegations of favoritism for reassigning Hilton to house arrest. At the time, Baca cited an undisclosed medical condition as the reason for making the decision.

Hilton was sent to a medical ward, where sheriff's officials said it costs $1,109.78 a day to house a female inmate compared to $99.64 a day in the general population.

Mary Tiedeman, who regularly visits the jails as a monitor for the ACLU, said the area where Hilton was being housed was usually reserved for high-security inmates or those worse off than Hilton has appeared.

"I don't know what her health issue is, but you have got to have a pretty intense medical or mental health problem to be in that part of the jail," she said.

Visiting days at the detention center are Sundays and Tuesdays. Inmates are allowed two guests per day for 30 minutes. Attorneys can come daily.

While in detention, Hilton is only allowed three magazines and three books a week. She told Barbara Walters that she is reading The Secret, The Power of Now, and the Bible. She says she has a spiritual advisor and has apparently found God.

2She receives duffel bags of mail each day, but forget about sending her things like money, desk supplies, or rosaries. Even lottery tickets and lip gloss are forbidden.

Hilton's release and subsequent return to the slammer last week didn't only create a sensation outside — inmates were captivated, as well.

"Everybody was just talking about it," said Carlos Aguirre, an inmate freed Tuesday. "That was the topic of the week, actually. Everybody was like, 'She should just do her time. What makes her so special?' "

Sheriff's sources say Hilton will most likely spend the remainder of her sentence at the medical ward where it costs 10 times as much to house a female inmate than the jail she called home for three days.

She's due to be released June 25 and at that time, will have to find a new agent. The Endeavor talent agency has dropped the reality show star, said Michael Donkis, a spokesman for the company.

"She is no longer a client," he said, declining further comment.

Hilton has been represented by the Beverly Hills-based agency since 2005.

The 26-year-old star of "The Simple Life" launched a pop-music career in August. She also has a namesake perfume and handbag collection.

The Endeavor agency was founded by powerful talent agent Ari Emmanuel, who is said to be the inspiration for Jeremy Piven's character, Ari Gold, on the HBO series "Entourage."