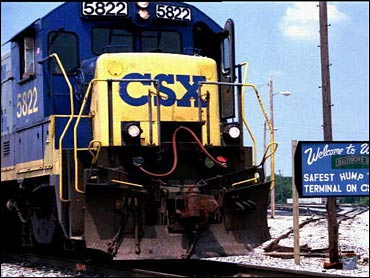 A computer virus was blamed for bringing down train signaling systems throughout the East on Wednesday.

"The cause was believed to be a worm virus similar to those that have infected the systems of other major companies and agencies in recent days," Hollingsworth said.

A virus known as "Sobig" has in the last few days become the fastest-spreading e-mail epidemic ever, according to security company Messagelabs, adding to havoc caused by the "Blaster" worm, which debuted last week.

Although the problem at CSX had been largely corrected Wednesday afternoon, there were some residual delays in Amtrak service from Washington to Richmond, Va., and points south, Amtrak spokesman Dan Stessel said.

"Most of the delays are in the 15 to 30-minute range on trains that travel through CSX territory," Stessel said.

Ten Amtrak trains were affected in the morning, Stessel said. Trains between Pittsburgh and Florence, S.C. were halted because of dark signals and one regional Amtrak train from Richmond, Va., to Washington and New York was delayed for more than two hours. Long-distance trains were delayed between four and six hours.

More than a dozen commuter trains in the Washington area were canceled.

CSX will work to protect its computer systems from further intrusion, Hollingsworth said.