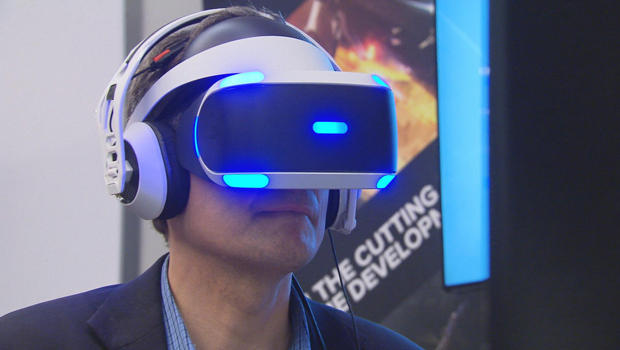 In no small number of households, some of those holiday gifts carry the label “Virtual Reality,” which is why this morning we’ve asked our man in tech, David Pogue, for a virtual reality check:

At the Consumer Electronics Show in Las Vegas this past week, you might have wondered why people were strapping contraptions to their faces. Are they blindfolds? Scuba masks? Some kind of unpleasant eye exam? Nope; they’re virtually reality headsets.

“There’s nothing quite like donning the headset yourself and truly experiencing these environments,” said Ryan Hoopingarner, who spends much of his time demonstrating one of the most popular headsets: the HTC Vive.

As soon as you put on the goggles, you get it. You’re not just seeing a scene; you can look around inside it. The Vive requires laser sensors that you set up in your room, and special handles that you carry. As a result, you can even walk around inside the scene, or even handle objects in that virtual world. And watch out for explosions!

But VR entertainment can be more than just blowing stuff up. It can take you places you couldn’t, or wouldn’t go, like a shipwreck at the bottom of the ocean, or the top of Mount Everest.

HTC isn’t alone, of course. Sony, Samsung, Google and Facebook each released new VR headsets last year. And just this week, another half dozen were unveiled at the electronics show.

With so many different goggles on the market, companies are racing to come up with software for them, like Vrtify. They can give you a front-row seat to dozens of concerts.

All sorts of businesses are considering the possibilities. Bradley Stern went shopping for a new townhouse without leaving his realtor’s office. “Everything is so vivid!” he said in a walk-through.

“If we have this now, where are we going to be in five years?” he told Pogue. “Is the client going to be able to completely design their property before it’s even built? I think that it’s really going to be something spectacular.”

Now, virtual reality has actually been around for decades. “The CBS Evening News” reported on an early iteration in February 1992:

“Have these people all lost touch with reality? In a way, yes. This is ‘virtual reality!’”

But VR was never good enough to appeal to the public, until 2014. That’s when Facebook’s Mark Zuckerberg paid $2 billion to buy Oculus, a headset created by 17-year old Palmer Luckey in his parents’ garage.

These days, Silicon Valley seems to believe that, soon, we’ll all live our lives wearing VR googles -- never mind that they can cost as much as $800 and must be wired to a high-end PC.

But just because a new technology gets a lot of hype doesn’t mean it’s actually ready for prime time.

“First of all, there’s a giant thing on your head, which is just obnoxious,” said USC Annenberg communications professor Dmitri Williams, who studies how people interact with technology. “A lot of the early sets had these pretty significant problems with motion sickness and nausea. That will drop down and go away over time. But right now, we’re in a bump where I have trouble sometimes, and a lot of people do.”

So, they’re big and heavy, very expensive, and sometimes make you sick. Great!  But Williams says there’s an even bigger problem with VR: it’s incredibly isolating. It shuts you off from the world.

“I don’t think people are going to be wearing VR goggles much of their days,” he said. “Because then they can’t look at other people. And it is just that simple.”

And that’s where augmented reality comes in. That’s where you still see the real world around you, but the computer layers new graphics onto that view.

Remember Pokemon Go? Last summer, millions of people played this game, searching the real world for digital creatures that appeared only on the phone’s screen. That is augmented reality.

The Microsoft HoloLens is an augmented reality (or what Microsoft calls “mixed reality”) headset.

Wearing the headset, Pogue “saw” holograms on the screen of a TV that was switched off.

Alex Kipman, who heads up the HoloLens project for Microsoft, compares today’s HoloLens to a cell phone from 1985. But even this early model is wireless, weighs only a pound, and responds to hand and voice commands.

Using hand motions in the air, Pogue was able to “scroll” down the page of the CBSNews.com website which appeared before him.

“That is pretty wild,” he said. “That’s the biggest monitor I’ve ever seen.  So when you work then, using HoloLens, you’re saying that you have multiple virtual, floating monitors like this, where you can say here’s my programming, here’s my web, here’s my email.”

It’s still a long way from those floating screens in the Tom Cruise sci-fi film “Minority Report,” but maybe not as far as you think.

Mark Griswold, who led the team that designed the curriculum, said when medical students first used the technology, “they got down on the ground and they looked at it from underneath because it’s the first time they were able to see that.”

First-year medical student Nicole Wise was surprised at how real the hologram seemed, as when she “saw” a diaphragm. “It was really the diaphragm that blew we away. I had kind of an ‘a-ha’ moment,” she told Pogue. “I went in 100% thinking it would be a fun day, but that it was gonna be gimmicky. I walked out of it having learned things that I hadn’t appreciated, either in the cadaver course or in our lectures.”

Griswold said, “We envision a day when every student showing up on campus is going to have a HoloLens in their backpack.”

“Like high schools are giving out laptops to use?”

“Yeah. This is going to be a core part of what you learn. Whether it’s history or anatomy, you’re going to be learning on HoloLens.”

Microsoft’s Alex Kipman says the technology is radical enough that, someday, everyone will have it: “There is a world in front of us where these things are replacing your phone, they’re replacing your TVs, they’re replacing your desktop. I mean, think about how long ago you didn’t have PCs in your offices. Seems like forever ago, but it’s been, like, 20 years. So I do believe absolutely they replace it. When? That I don’t know. It will be within our lifetimes.”

But for USC’s Dmitri Williams, whether it’s augmented reality, or virtual reality, this technology won’t succeed until it becomes more interesting than, well, real reality.

What can Australia teach us about guns and gun control?
Thanks for reading CBS NEWS.
Create your free account or log in
for more features.
View CBS News In
CBS News App Open
Chrome Safari Continue
Be the first to know
Get browser notifications for breaking news, live events, and exclusive reporting.