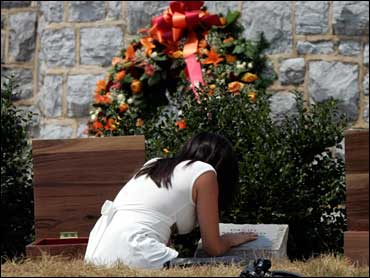 A set of 32 small stones that became a focal point for the grieving Virginia Tech campus following April's shooting spree were replaced with much larger rocks in a solemn ceremony on Sunday.

The new, 300-pound stones engraved with each victim's name in front of an administration building will serve as an intermediate memorial while officials look for a permanent site elsewhere on the main campus.

A dirt path worn in front of the smaller stones, which were hurriedly set by a student group right after the April 16 massacre, was replaced with a stone walking path. The new "Hokie Stones" are embedded in an arc of crushed gravel, with holly bushes planted behind them.

A crowd 10,000 people formed a sea of maroon and orange on the lawn as about 100 of the victims' family members, some leaning on their escorts, were seated under an open tent.

Steger called the memorial an important tribute to the 27 students and five faculty members killed.

"Each was gifted and talented and unique," he said, adding the memorial also honors the 23 wounded.

The memorial features a larger, center stone as a monument to all those killed and injured in the shooting rampage by Seung-Hui Cho. It is engraved with the message, "We are Virginia Tech. We will prevail," from a poem penned by English professor Nikki Giovanni for the first memorial service after the shootings.

In the original semicircle, a 33rd stone was added anonymously for Cho. University officials had said it would be offered to Cho's family, but it vanished before they could do so. The new memorial has no place for a 33rd marker.

Fall classes were set to start on Monday.

Adeel Khan, president of the student government association, encouraged his fellow students to honor those killed by moving forward.