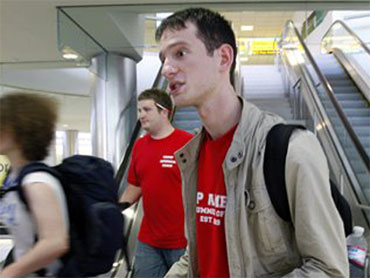 Passengers who spent hours stuck on a hot, dark plane on the tarmac in Connecticut described on Wednesday a scene of confusion and misery as their trans-Atlantic flight was delayed, then diverted.

Kimberley Vince was on Tuesday night's Virgin Atlantic flight from London to Newark to begin work as a camp counselor on New York's Long Island. She said the crew made frequent announcements from the tarmac that led passengers to believe they'd be departing soon.

"It was like every five or 10 minutes for four hours," she said.

Bad weather grounded the flight from London to Newark, N.J., at Connecticut's Bradley International Airport outside Hartford on Tuesday night. Passengers say they landed at about 8:20 p.m. and were kept on the plane until about 1 a.m. Wednesday. Once inside the terminal, passengers were delayed another three to four hours as they waited to get through customs, other passengers said.

Nicholas Van Pittman, an artist and musician based in Germany, said no announcement was made that the plane was being diverted. Once on the ground, he said, the air conditioning failed, and at least one passenger required oxygen.

"Virgin Atlantic would like to thank passengers for their patience and apologise for any inconvenience cause," the airline said Wednesday in a statement.

Janine Doy, a Virgin spokeswoman in London, said Bradley "isn't used to dealing with international flights" and had to call customs and immigration officials back to the airport Tuesday night to process the passengers. She said the airline was forced to keep people on the plane.

"It was a situation that was beyond our control," Doy said. "There were weather conditions. ... Bradley had to get customs and immigration to the airport."

New Jersey resident Russell Homasi, returning from visiting friends in London, said passengers were told the plane had been refueled, then told there was a problem and that the plane couldn't leave.

Passengers were generally well behaved, Van Pittman said, but one young man "was freaking out, saying he had to get off the plane" and crew members threatened to have him arrested.

Virgin was checking into reports of mechanical issues and the jet not having the air conditioner running while it was stalled.

Doy said the planes have water fountains aboard, but she wasn't sure if any food was left over after the in-flight meals had been served.

The three-hour limit on tarmac strandings that went into effect in April doesn't apply to foreign carriers or international flights by U.S. carriers, although U.S. carriers are required to have contingency plans for returning passengers waiting for prolonged periods on planes to airport terminals.

Earlier this month, Transportation Secretary Ray LaHood proposed extending the requirement for contingency plans to foreign carriers. The proposal included a request for comment from airlines and the public on whether the Transportation Department should also extend a firm three-hour limit to international flights by U.S. and foreign carriers.

"The events reported overnight in Connecticut reinforce my belief that passengers have rights and are entitled to fair treatment when they fly," LaHood said in a statement. "Our aviation enforcement office will be looking into the incident to determine whether any violations occurred."

Ken Cast, an airport operations specialist at Bradley, said Virgin is not one of the airport's carriers and the airline had to call in personnel to handle the passengers.

"Being an international flight, it's not like you can let people wander aimlessly," Cast told the AP. "They need to be processed, and they need to be kept safe. Everyone has to clear customs.

Cast confirmed that a few passengers who weren't feeling well were treated by paramedics. Details on the sick passengers weren't immediately available.

A Bradley airport spokesman, John Wallace, said the airport doesn't have a lot of international flights, and customs officials generally work during the day. He says customs personnel got back to the airport about an hour after being called Tuesday night.

"Everyone did the best they could under the circumstances," Wallace said. "The process to do clearance when you have 300 people is going to take a while, plus their luggage."

Bradley's only regular international passenger flights are to and from Toronto and Montreal, but the airport does have many international cargo flights, Wallace said.

Chris Rossi, Virgin Atlantic vice president for North America, said the airline had offered passengers vouchers for ground transportation and for hotels and was considering offering "some sort of credit" on tickets.

The Virgin Atlantic flight was diverted as showers and strong thunderstorms moved through the Northeast on Tuesday night.

Temperatures at Bradley International Airport were in the mid-60s to low-70s with uncomfortable humidity at the time the Virgin plane was on the tarmac, said Charlie Foley, a meteorologist with the National Weather Service.