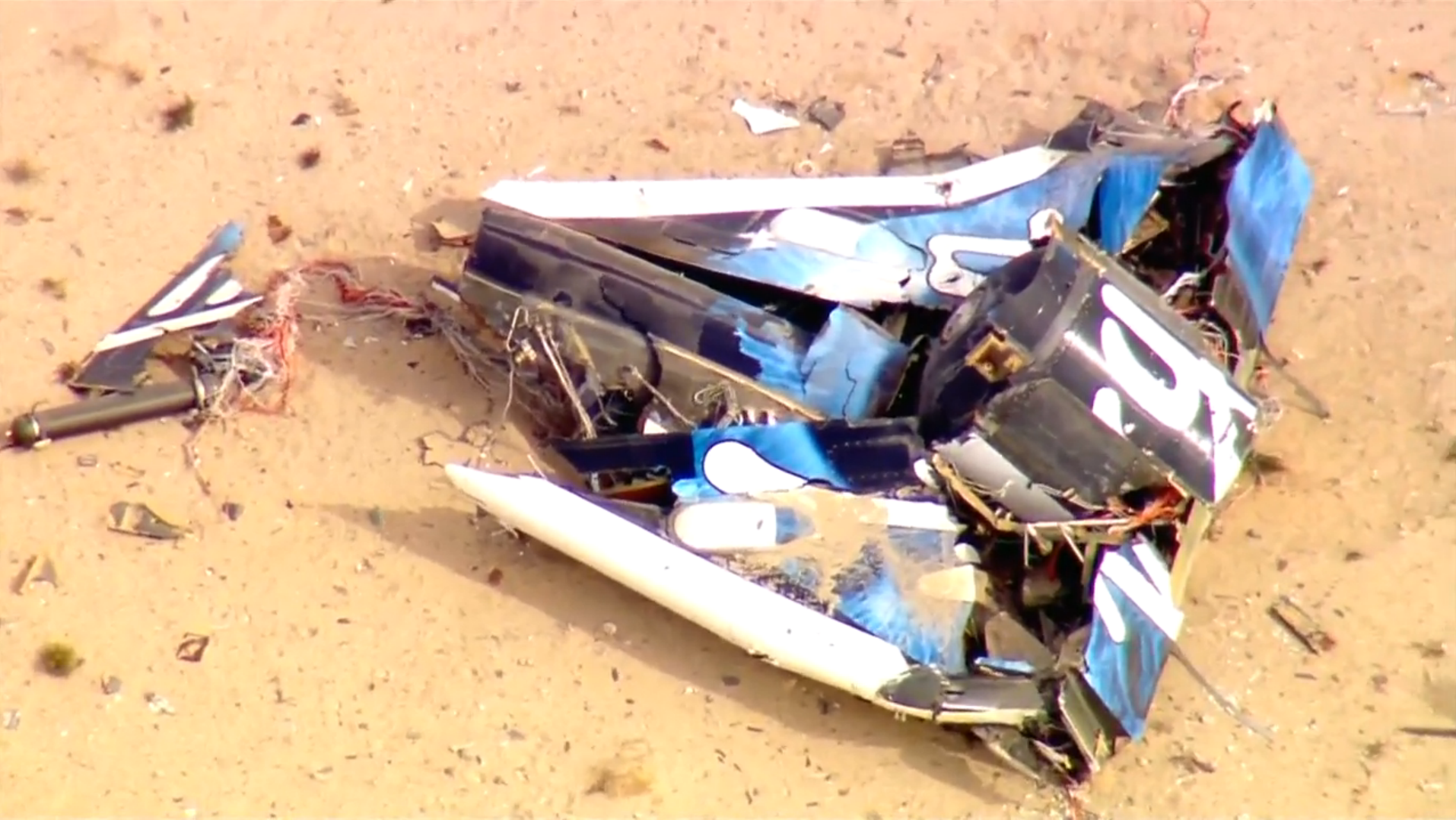 MOJAVE, Calif. -- A Virgin Galactic space tourism rocket, the SpaceShipTwo, exploded and crashed Friday during a test flight, killing one person aboard and seriously injuring another, witnesses and officials said. Wreckage was spotted in Southern California's Mojave Desert.

The spacecraft was carrying a crew of two. The Kern County Sheriff's department said it took off from the Mojave Airport on a test flight at 9:18 a.m. local time. At 10 a.m., Kern County Fire received a call reporting an aircraft down 20 miles northeast of Mojave, Calif. The area is about 120 miles north of downtown Los Angeles.

Authorities located the pilot, who had ejected, and he was taken to the Antelope Valley Hospital in Lancaster with what were described as "moderate to major injuries." Kern County officials said the co-pilot suffered fatal injuries. It was not clear whether the co-pilot was able to eject.

"During the test, the vehicle suffered a serious anomaly which resulted in the loss of SpaceShipTwo," the company said on Twitter. It could not confirm the fate of the crew, saying "Our first concern is the status of the pilots, which is unknown at this time."

Virgin Galactic promised to work closely with the authorities to determine the cause of the accident. Investigators from the National Transportation Safety Board (NTSB) are heading to the crash site.

Ken Brown, a photographer who witnessed the crash, said the space tourism craft exploded after it was released from a plane that carries it to a high altitude.

The FAA confirmed the accident occurred shortly after SpaceShipTwo separated from its carrier jet, known as the WhiteKnight Two. The carrier remained airborne and landed safely.

CBS News' Bill Harwood reports Friday's test was the first powered test flight of the craft since January, and the first using a new hybrid rocket motor designed to increase performance and safety. Virgin Galactic tweeted shortly before the crash that SpaceShipTwo was flying under rocket power.

SpaceShipTwo has been under development at Mojave Air and Spaceport in the desert northeast of Los Angeles.

Virgin Galactic is the billionaire Richard Branson's space tourism outfit, started in 2005. The company was testing its SpaceShipTwo spaceplane for flights that will carry customers to the edge of space and back for $250,000 a ticket.

The craft -- which could carry up to six passengers and two pilots -- was built by Mojave-based aerospace research company Scaled Composites LLC, which was founded by cutting-edge aviation designer Burt Rutan. Its design is based on his SpaceShipOne, which was the first privately funded spacecraft to make a suborbital flight, reaching an altitude of greater than 62 miles (100 kilometers) -- the definition of where "space" begins -- in 2004.

SpaceShipTwo made its first powered flight in April of 2013.

Friday's crash was the second major accident this week for the commercial space industry. On Tuesday, an Orbital Sciences Antares rocket exploded moments after liftoff from a spaceport in Virginia. It was carrying an unmanned cargo ship with supplies for the International Space Station.