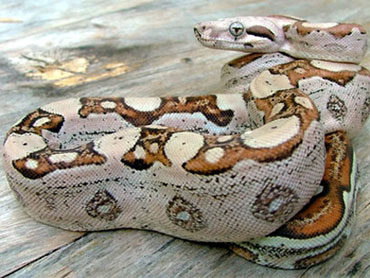 A tiny fraction of vertebrate species have ever been seen reproducing through parthenogenesis, the fatherless birth of offspring in which the embryo develops without fertilization by a male. Now you can add boa constrictors to that short list: A study in Biology Letters documents the case of a boa that gave birth to 22 offspring over the last two years, all of whom are female and born this unusual way.

"Only with the development and application of molecular tools have we truly begun to understand how common this form of reproduction may be," lead author Warren Booth told Discovery News. Booth, a research associate at North Carolina State University's Department of Entomology, and his team first suspected something was up when the mother boa constrictor gave birth, twice, to a total of 22 caramel-colored females. The males housed with the female did not carry the gene for this recessive color trait.

When Booth's team analyzed the DNA of the young snakes, they found no evidence of paternity by any of the males who'd mated with their mother previously. Furthermore, the chromosomes of the 22 young gave them away.

In place of X and Y, snakes and many other reptiles have Z and W chromosomes. In all snakes, ZZ produces males and ZW produces females. Bizarrely, all the snakes in these litters were WW. This was further proof that the snakes inherited all their genetic material from their mother, as only females carry the W chromosome.

WW snakes have been produced in the lab before, but never seen occurring naturally. It was not even clear whether a WW snake could be viable.

So Booth's team has achieved a first, though previous studies have seen parthenogenesis in sharks, lizards, and Komodo dragons.

Long thought to be vanishingly rare, parthenogenesis is becoming more common the more scientists look for it. For instance, in 2003 a Burmese python in an Amsterdam zoo produced embryos parthenogenetically, but they were not allowed to develop so we do not know if they were truly viable.

Now the researchers are left with a question: Why would the boa constrictor reproduce this way if it didn't need to? Despite the fact that there were males aplenty with whom to mate, the female reproduced twice through parthenogenesis. But reproducing this way is generally a last-ditch method - and one that diminishes genetic diversity.

"This female has given birth to sexually produced babies in the past, and only in years that she was housed with males has she produced offspring," Booth explained to the BBC. "It appears that some interaction with a male is required. However, why she does not utilise his sperm is at present unknown."

Inside the tech that could "change the face of modern finance"