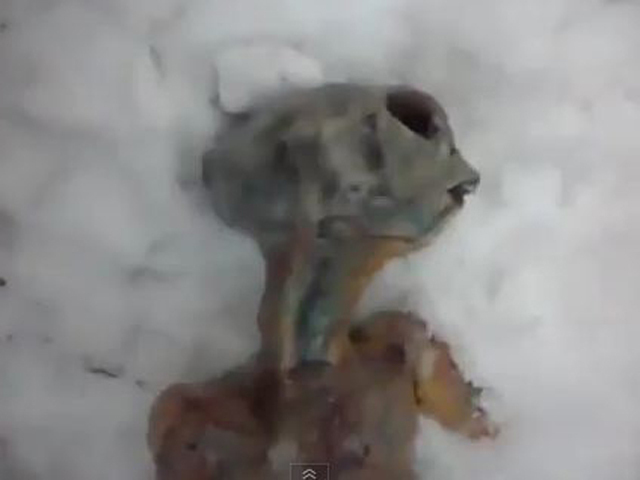 There's a new UFO crash video making the rounds titled, "Dead Alien Found in UFO Hotspot in Russia and it shows two Russian men finding what appears to be a dead extraterrestrial alien near a tree stump in a snowy field in Irkutsk, Siberia.

In the video, the alien looks to be about two or three feet tall, with a large head and long, thin limbs. It's gotten over 1 million hits so far, with many commenters asking if it could be the real thing. A message on the YouTube video, which was uploaded about a week ago, states that "Your government is lying to you about UFO & alien visitation."

It seems clear that someone's lying, all right.

Even without getting our hands on what is probably a rubber doll, there are several signs that this video is  a hoax. The first is the way the video was shot; it opens with what is called an "establishing shot." This is a common filmmaking technique to let the viewers know where the scene is taking place. (We see this in sitcoms, for example, when we're shown the exterior of a house or apartment before cutting to the action inside the room.) (Ten Alien Encounters Debunked)

The Russian alien video clip begins, inexplicably and improbably, with a wide shot of a snow-covered rural area and what appears to be a factory in the distance. The handheld camera then pans right to find the cameraman's companion nearby, and then to a snowy trench leading to what appears to be the small alien creature.

It's clear that the filmmakers knew the alien was there, and didn't just "discover" it on cue. Furthermore, the actors, who speak in Russian, can be heard laughing, and their tones do not suggest that they just stumbled upon a genuine alien body. (7 Things That Create Great Space Hoaxes)

Besides that, the scene doesn't even match up. The camera follows a snow trench leading to the alien (suggesting a spacecraft crash), yet no space vessel is seen. Instead, it's just the alien, seemingly posed for dramatic effect -- indeed, one of its legs appears to have been torn off in the crash -- as if it had been flying under its own power when it suddenly dropped from the sky.

It's also suspicious that the alien just happens to look almost exactly like the popular depictions of "little green (or gray) men." These are the typical big-headed, small-limbed aliens that appear on T-shirts, movies, books, and elsewhere. The alien dummy's skin is translucent, which is a nice creepy effect seen in many Hollywood films, but could have easily been made using clear gelatin and animal parts from a butcher shop.

In our book, the hoax film earns a B for effort, a C for technical expertise, and a D for credibility.