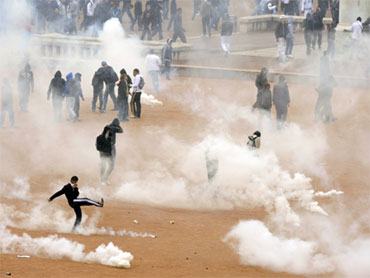 Workers opposed to a higher retirement age blocked roads to airports around France on Wednesday, leaving passengers in Paris dragging suitcases on foot along an emergency breakdown lane.

Outside the capital, hooded youths smashed store windows amid clouds of tear gas.

Riot police in black body armor forced striking workers away from blocked fuel depots in western France, restoring gasoline to areas where pumps were dry after weeks of protests over the government proposal raising the age from 60 to 62.

Riot officers in the Paris suburb of Nanterre and the southeastern city of Lyon sprayed tear gas but appeared unable to stop the violence.

After months of largely peaceful disruptions, some protests erupted into scattered violence this week over the government's push to raise the retirement age from 60 to 62. President Nicolas Sarkozy vowed that his conservative party would pass the reform in a Senate vote expected Thursday.

Many workers feel the change would be a first step in eroding France's social benefits — which include long vacations, contracts that make it hard for employers to lay off workers and a state-subsidized health care system — in favor of "American-style capitalism."

Sarkozy ordered all fuel depots forcibly reopened and vowed Wednesday that he would "carry the retirement reform through to the end." And despite France's tolerance for a long tradition of strikes and protest, official patience appeared to be waning after weeks of actions that have snarled traffic, cancelled flights and dwindling gasoline supplies and, now, rising urban violence.

Protesters waving red union flags and reflective vests temporarily blocked the main road leading to one of two terminals at Orly Airport on Wednesday. The ADP airport authority warned on its website of "serious difficulties expected in access to airports and air traffic."

The protests tangled traffic to the airport and some passengers walked hundreds of meters (yards) along an emergency lane to get there, dragging suitcases behind them. In one terminal, screens showed that 10 of 52 flights Wednesday afternoon were cancelled.

"It's Baghdad here," said Lionel Philippe, who arrived at Orly after much difficulty because of protesters blocking access to the airport — only to find his flight to Biarritz cancelled.

He said he wasn't interested in the pension reform debate, he just wants to get home.

"I'm 28, by the time I retire everything will have changed anyway," he said.

At Charles de Gaulle airport north of Paris, the nation's biggest, protesters sang the French national anthem before pushing through a police barricade.

"It is like we are on another planet," said Canadian traveler Olivier Lejour, waiting to take off from Charles de Gaulle. While he said it was "fun" to watch, he said the protests disrupted his efforts to work in Paris.

The CGT Transport union says protests also shut down the Clermont-Ferrand airport in the south and disrupted airports in Nice and Nantes.

At one site in the western town of Donges, police formed a corridor along the road leading to the depot to allow trucks to pass in and out. Video footage showed officers peacefully herding striking workers away from one depot.

Hortefeux warned that the blockades threatened emergency services and could have grave consequences for the entire French economy and public health and safety.

"We will use all means necessary to get these delinquents," including the GIGN paramilitary police, he said. The police deployed so far have been CRS riot police, helmeted and wielding shields, sometimes firing tear gas or rubber bullets.

There are still more than 3,000 gas stations empty of fuel, or about a quarter of those nationwide, the environment minister said Wednesday.

Over the past week, 1,423 people have been detained for protest-related violence and 62 police officers injured, he said. He said he ordered police to look at video surveillance to find more perpetrators, suggesting more arrests could be ahead.

In Nanterre on Wednesday morning, about 100 students blocked the school entrance and part of highway in front of the school, while a "tranquility team" of about 30 adults in special red jackets sought to keep things calm.

Then about 100 other youths arrived and started darting through the town streets, smashing store windows and throwing stones. Some store owners lowered metal blinds to avoid looting. Nine police vans were parked in the surrounding area.

The sidewalks of Nanterre were littered with glass from bus shelters and illuminated signs that had been smashed Tuesday. All the vehicles were removed Wednesday from the street in front of the school, because a car had been torched there the day before.

"We try to protect local residents and the mother passing by with children, we try to control the traffic to avoid that young people get hit, because this is not in the interest of the demonstration," said Elisabeth Guerrier, a social worker trying to act as a mediator in Wednesday's conflict.

In the city of Lyon, new clashes broke out Wednesday morning, with rioters running in small groups down different streets, throwing projectiles and setting off flares. At least 700 police officers were deployed, and some responded with tear gas and cordoned the rioters off. A gendarme helicopter circled overhead at low altitude. A delivery truck was set ablaze.

Hortefeux, the interior minister, visited the city in the afternoon, when tensions appeared to have calmed in Lyon and in Nanterre.

This week's clashes revived memories of student unrest in 2006 that forced the government to abandon another highly unpopular labor bill. And the specter of 2005 riots that spread through poor housing projects nationwide with disenfranchised immigrant populations is never far away.

Students plan new protests Thursday, with a demonstration in Paris hours before the Senate is expected to approve the retirement measure.

Strikes continued Wednesday at the SNCF national rail network, and one in three TGV high-speed train was cancelled.

Some 69 ships are waiting in waters outside Marseille because oil terminals are blocked by strikers.

In Marseille itself, some 150 members of the civil security service — which includes fire fighters and sappers — intervened to collect heaps of reeking garbage piled up after days of strikes by trash collectors. No buses were running in Marseille because unions were blocking the main bus depot. Protesters occupied the Marseille Chamber of Commerce before being kicked out by police.

Over 200 years after Waterloo, bones of slain soldiers remain a mystery
Thanks for reading CBS NEWS.
Create your free account or log in
for more features.
View CBS News In
CBS News App Open
Chrome Safari Continue
Be the first to know
Get browser notifications for breaking news, live events, and exclusive reporting.