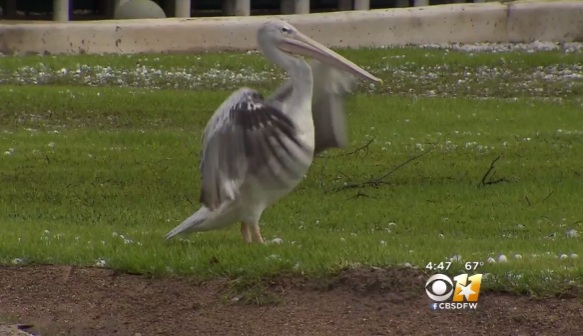 FORT WORTH --The skies opened fire on Texas on Thursday -- a violent storm assaulted the Dallas-Fort Worth area with huge hail stones -- leaving vehicles looking liked they'd been attacked by machine guns.

And it wasn't just cars that fell victim.

Seven birds including flamingos, pelicans, and ducks were killed from heavy hail fall at the Fort Worth Zoo on Thursday, CBS Dallas-Fort Worth reported.

Wilson said injuries to the surviving animals are not considered serious.

"We did have a few birds injured, they are over in our hospital. We do have an animal hospital on premises. Some of them were just a little stunned, probably had gotten hit by hailstones," she said.

The clean-up and repairs to damage left by the hail fall delayed the zoo's opening by about two hours.

While crews worked to get the grounds ready for visitors, crowds lined up by the hundreds outside as they waited to go in.

Wilson said the hail storm came during their peak days of spring break.

By mid-day the zoo had returned to normal operations.

In Dallas backyards were covered in a sheet of white.

More than two dozen Medstar ambulances were put out of service. Some of their windshields punctured by baseball sized hail, others completely shattered.