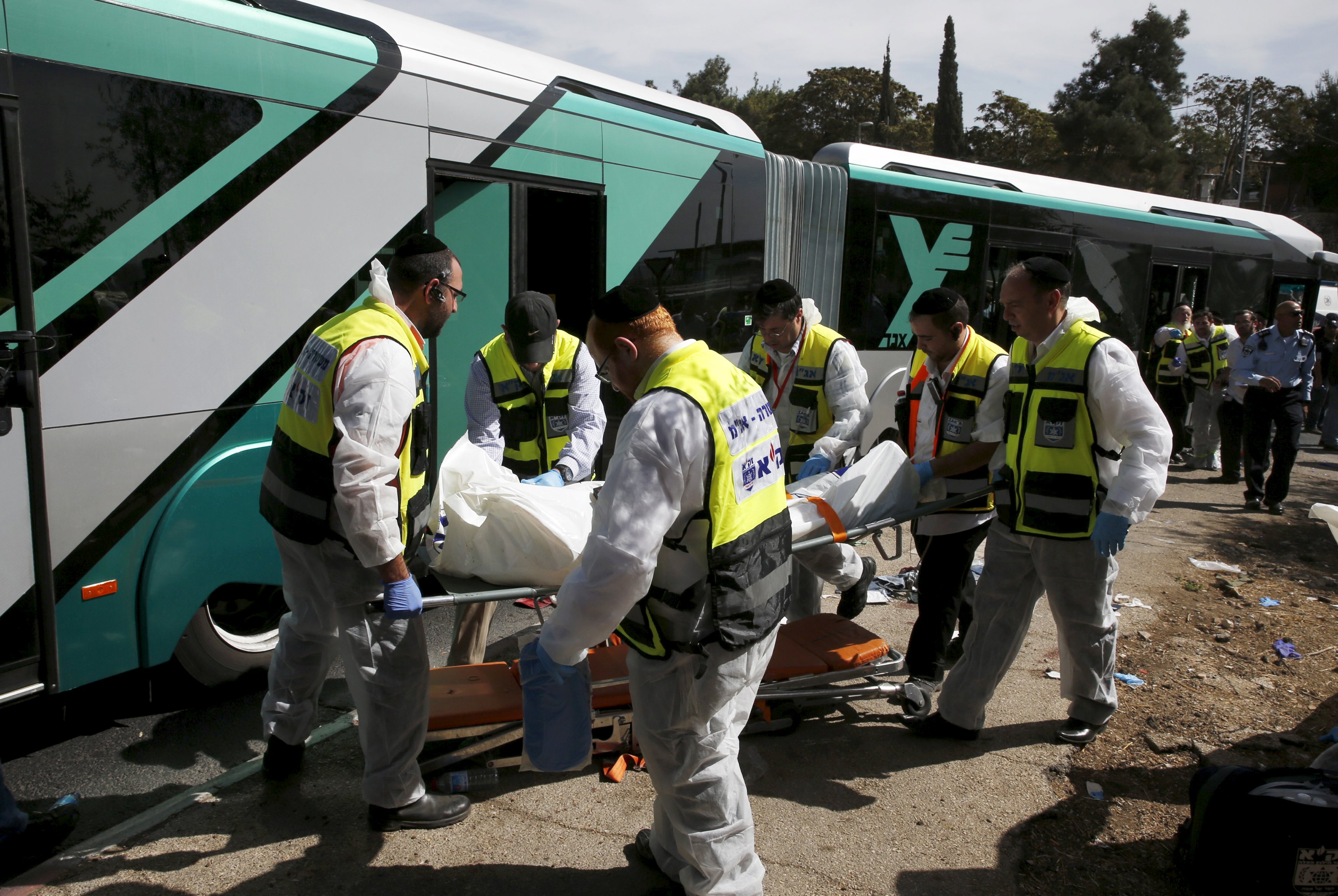 JERUSALEM - A pair of Palestinian men boarded a bus in Jerusalem and began shooting and stabbing passengers, while another assailant rammed a car into a bus station before stabbing bystanders, in near-simultaneous attacks Tuesday that escalated a monthlong wave of violence.

The Jerusalem attacks, along with two stabbings in a central Israeli city, marked the most serious outbreak of violence since the current round of tensions erupted. More than 15 people were wounded.

The violence, coming at a time when peace prospects appear bleak, have fueled a sense of panic in Israel and raised fears that the region is on the cusp of a new round of heavy violence.

CBS News' Jonathan Vigliotti reports Palestinian groups have declared a "Day of Rage" on Tuesday across the region.

Since the Jewish New Year last month, at least eight Isrealis and 29 Palestinians have been killed in the almost daily violence. The troubles began largely due to Muslim anger over increasing Jewish visits to the al-Aqsa mosque in Jerusalem.

The Jerusalem hilltop compound lies at the heart of recent tensions is revered by Muslims as the spot where Prophet Muhammad ascended to heaven and by Jews as the site of the two Jewish biblical Temples.

Many Palestinians believe Israel is trying to expand Jewish presence at the site, a claim Israel adamantly denies and considers slanderous. Under a longstanding arrangement administered by Islamic authorities, Jews are allowed to visit the site during certain hours but not pray there. The site is under the administrative authority of Jordan.

On Tuesday, police closed major highways leading in and out of Jerusalem, while Prime Minister Benjamin Netanyahu called an emergency meeting of his Security Cabinet, where police were to present a plan to halt the violence. Police spokeswoman Luba Samri said the country's internal security minister, Gilad Erdan, was considering a number of immediate steps, including sealing off Arab neighborhoods in east Jerusalem, where many of the attackers have come from, and making it easier to get gun licenses.

While Israelis are on edge over the random nature of the attacks, the long-running diplomatic deadlock has left many Palestinians feeling hopeless about their chances of ending nearly half a century of Israeli occupation.

In the bus attack, police said two men, one carrying a gun and the other with a knife, boarded the vehicle and attacked passengers. Police said a 60-year-old man was killed, and a second person who was wounded later died. One of the attackers was shot dead and the second attacker was subdued by a crowd.

Elsewhere in Jerusalem, a Palestinian motorist rammed his vehicle into a crowded bus stop, then got out and began stabbing people. One Israeli was killed, police said.

The Jerusalem attacks, coupled with a pair of stabbing attacks in the central Israeli city of Raanana that injured five, including one seriously, came in rapid succession. Emergency services said several of the wounded were in serious condition.

At the scene of one of the attacks, Jerusalem Mayor Nir Barkat called on the government to seal off the West Bank and certain Arab neighborhoods of east Jerusalem to quell the wave of attacks that have struck the city. Some government ministers have called for even more dramatic measures.

The unrest began last month with clashes at Jerusalem's most sensitive holy site and quickly spread across Israel and into the West Bank and Gaza Strip.

The Israeli military says hundreds of Palestinian protesters in Gaza gathered Tuesday near the Israeli border and threw stones and burning tires toward Israeli positions. The army says it is using "riot dispersal means" against the crowd.

Palestinian medics say five people have been wounded by Israeli gunfire, two of them seriously. Over the weekend, nine Palestinians in Gaza, including a mother and her 2-year-old child, were killed in Israeli-Palestinian violence.

Sami Abu Zuhri, a spokesman for Gaza's Hamas rulers, said the movement "praises these heroic operations in Jerusalem and greets the heroes who carried them out."

The attacks come at a time of deep despair for the Palestinians. Peace talks broke down more than a year ago, and prospects for relaunching diplomatic efforts to end the conflict appear slim. After years of diplomatic deadlock, Palestinian President Mahmoud Abbas has seen his popularity plunge.

The attackers, many of them teenagers, have had no affiliation with militant groups, and the seemingly random nature of the stabbings has made it difficult to predict or prevent them. The use of vehicles and firearms in Jerusalem on Tuesday, however, marked a more serious level of violence and bring back memories of the deadly attacks that plagued Israeli cities during last decade's second Palestinian uprising.

Israeli security officials, however, said Tuesday's seemingly coordinated attacks indicated that the outburst of violence was starting to take on a more organized fashion, from groups behind the planning and those carrying out attacks. The officials, speaking anonymously according to regulations, said Israel expects the current wave to last at least a few more weeks.

Netanyahu has come under heavy criticism for failing to stop the violence, and an opinion poll this week showed that more than 70 percent of the public is dissatisfied with his handling of the crisis.

Some of the attacks have been carried out by members of Israel's Arab minority, who often encounter discrimination and identify with their Palestinian brethren in the West Bank, east Jerusalem and Gaza Strip.

In a fiery speech to parliament on Monday, Netanyahu accused the country's Arab leaders of helping incite weeks of violence.

The violence erupted over the Jewish New Year last month, fueled by rumors that Israel was plotting to take over a site holy to both Muslims and Jews. The rumors ignited clashes between Israeli police and Palestinian activists who hurled stones and firebombs at them from inside the mosque, and the violence has spread.

Israel has dismissed the rumors and repeatedly said there are no plans to alter a longstanding status quo at the spot, revered by Jews as the site of the biblical Temples and today home to Islam's Al-Aqsa Mosque compound.