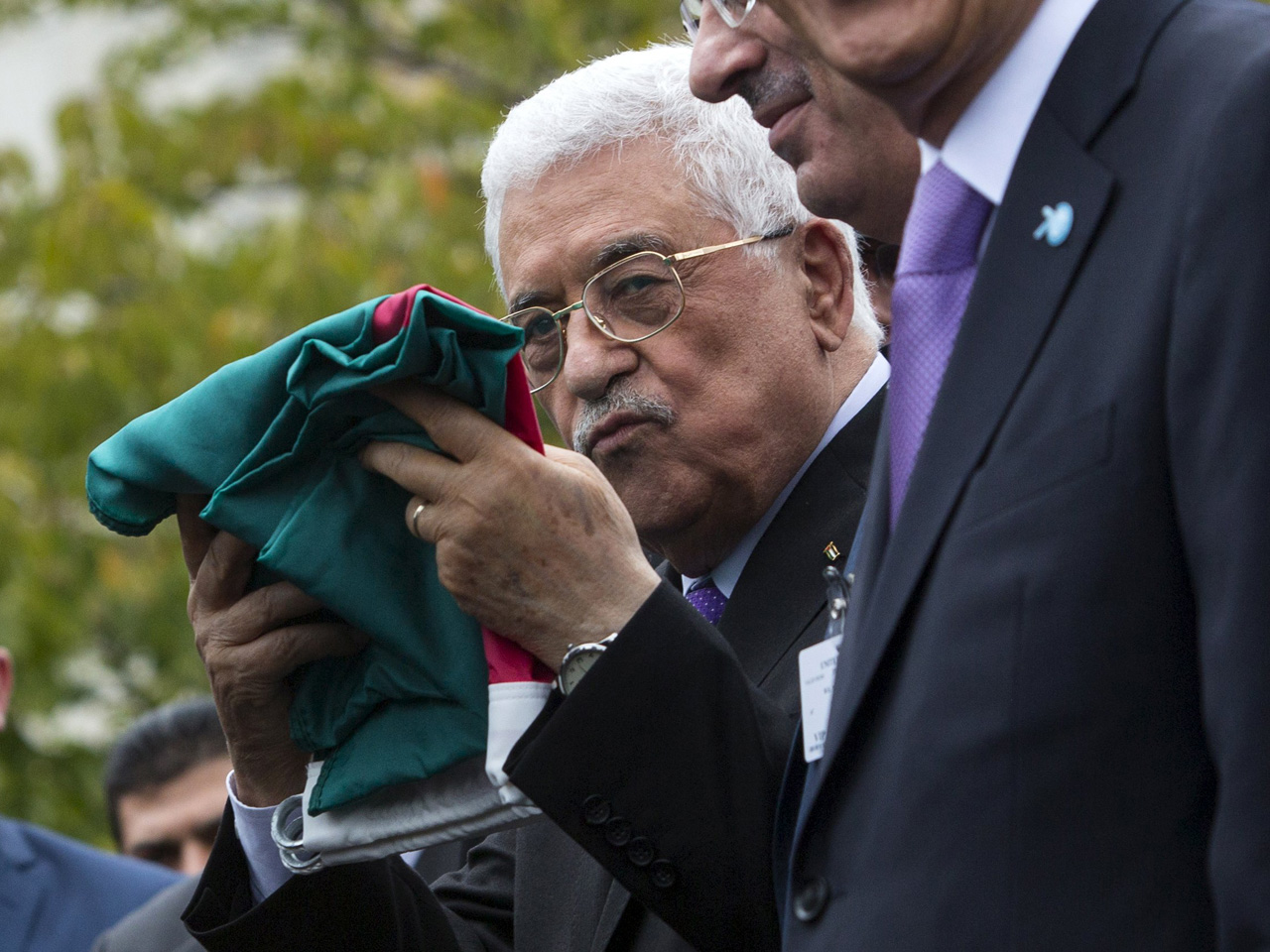 In his speech at the U.N. General Assembly Wednesday, Abbas called the state of affairs in Israel "unacceptable," and he repeatedly slammed Israeli leaders for breaking promises "as an occupier." As a result, Abbas said, the Palestinian people will no longer recognize any agreements they have signed thus far with them.

"They are not listening to the truth," Abbas said.

Abbas' defiant speech came on a historic day for the Palestinian people: the U.N. officially raised the Palestinian flag outside its New York headquarters, with the blessing and full support of Secretary-General Ban Ki-Moon.

Abbas' speech Wednesday morning was most serious warning yet to that he might walk away from engagement with Israel and dissolve the Palestinian Authority, although he stopped short of accompanying his threat with a deadline.

Abbas cited the continued settlement expansion, the alleged violation of border rights, the accused toleration of Jewish extremists, Israel's refusal to release certain prisoners, and the ongoing drama at the al Aqsa mosque in Jerusalem as some of the reasons why he no longer feels bound to his promises to Israel.

The Palestinian leader said there was still a chance for peace, and that he hopes Israel joins most of the rest of the world in recognizing an independent Palestine.

"One hundred thirty-seven states have recognized our state," Abbas said. "That is four times the number of states that recognized Israel at its foundation."

On Wednesday, he said that Israel's refusal to commit to agreements signed "render us an authority without real powers."

Abbas' tough talk could be an attempt to mask his political weakness. Hopes of setting up a Palestinian state have been derailed, and there are calls for the leader to resign and dissolve the Palestinian Authority. Without a specific deadline for taking those steps, Abbas left himself room for diplomatic maneuver to refocus the attention of the international community on the Israeli-Palestinian conflict.

In response to his speech, Israeli Prime Minister Benjamin Netanyahu released a statement calling Abbas' words "deceitful," adding they prove "the fact he does not intend to reach a peace agreement."

After lashing at Israel inside the U.N., Abbas raised the flag of the state of Palestine at the United Nations for the first time on Wednesday with a promise that it will be raised soon in Jerusalem, "the capital of our Palestinian state."

More than 300 ministers, diplomats and well-wishers who crowded into the rose garden at U.N. headquarters where a temporary flagpole had been erected for the ceremony applauded his words.

Abbas told the crowd it was a "historical moment" on the Palestinian road to independence.

As the black, white, green and red flag went up the flagpole, cheers and shouts of "Peace! Peace! Palestine!" erupted.

The Palestinians campaigned for a General Assembly resolution that was overwhelmingly approved on Sept. 10 allowing U.N. observer states to fly their flags alongside those of the 193 U.N. member states. The Holy See and Palestine and are the only two U.N. observer states.

In contrast to the Palestinians, the Holy See flag was raised outside U.N. headquarters alongside flags of the 193 U.N. member states without fanfare or ceremony just before Pope Francis arrived last Friday to address the General Assembly. The permanent flagpole for the Palestinian flag is already in place beside it.

U.N. Secretary-General Ban Ki-moon called Wednesday a day of "pride" and "hope" for Palestinians around the world.

That will lead to the unfurling of the Palestinian flag "in its proper place - among the family of nations as a sovereign member state of the United Nations," Ban said.