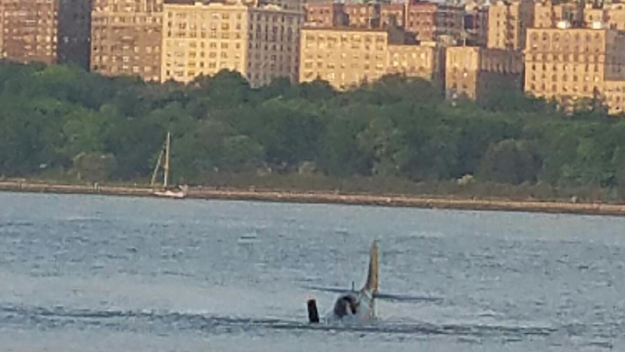 The Federal Aviation Administration said it received a report that a P-47 Thunderbolt aircraft went down in the river two miles south of the George Washington Bridge around 7:30 p.m.

Police did not confirm the body was that of the pilot, the only person who was aboard the plane. The pilot's name was not made public.

Around 9 p.m., New Jersey State Police tweeted that the pilot had been rescued and was being transported to the hospital with minor injuries. The department backtracked about an hour later and said the investigation was continuing, with the NYPD in charge.

The FAA said the P-47 was one of three aircraft that departed from Republic Airport in Farmingdale, on Long Island, just east of New York City. The other two aircraft returned to the airport and landed safely.

Witness Frank Piazza captured a photo showing the wing of the plane sticking up from the water. Ultimately, the aircraft was completely submerged in the river, according to WCBS.

The American Airpower Museum is celebrating the 75th anniversary of the P-47 Thunderbolt this weekend. Museum spokesman Gary Lewi said the plane is kept at the museum and was taking part in an air show at nearby Jones Beach.

"Apparently the aircraft suffered an inflight engine failure and the pilot put it into the Hudson," Lewi said. "I'm told the aircraft is at the bottom of the Hudson."

The three planes, the P-47, a P-40 and a photo plane, had been flying over the Hudson to shoot promotional material for the Jones Beach air show, Lewi said.

Welz initially said the plane was in the area for Fleet Week activities, but Lewi said that was incorrect.

"When I first saw them go past, it was three planes bunched up together and I was like, they're flying extremely close to each other," witness Camara Dodd told CBS New York. "And then like no less than 10 minutes later I turned over my shoulder and one was going down."

"When we looked to our left, the only thing we saw was the tail end of it, but we didn't hear no engine. But then we also saw the pilot - he came up, and he also just went back down, but he never came up," added witness Nick Ciccolella, who was dining with Dodd.

"You could see him trying to get out of the harness of whatever - whatever he was strapped to, the seatbelt or harness or whatever, but he couldn't get out," Dodd said.

"I thought was making a water landing, but then we saw the other planes turning around and we thought something is wrong," said witness Sabine De Meuter.

John Michael Arcella posted YouTube video of the plane going down. He said that he was riding his bike on the riverside bike path when he saw a plane flying low with a trail of smoke behind it.

The search evoked memories of the "Miracle on the Hudson," the emergency landing of a U.S. Airways plane on the river in January 2009. Friday's crash happened about two miles away, WCBS reported.

Pilot Capt. Chesley "Sully" Sullenberger -- now a CBS News aviation and safety analyst -- was forced to bring the plane down on the Hudson after it struck a flock of geese after takeoff and lost power in both engines. All 155 people on board the aircraft survived.